The Politics of Comedy

Further to our discussion in the post "Humor Us," I found what follows in an article about the White House Correspondents Dinner in early May. "So Not Funny" by Richard Cohen at www.washingtonpost.com takes issue with Stephen Colbert's performance as the host of the dinner, which usually involves a prolonged roast of the president.

[Speaking truth to power] is a tired phrase, as we all know,
but when it was fresh and meaningful it suggested repercussions,
consequences -- maybe even death in some countries.
When you spoke truth to power you took the distinct chance that
power would smite you, toss you into a dungeon or
-- if you're at work -- take away your office.

But in this country, anyone can insult the president of the United States.
. . .
Bush himself plays off his reputation as a dunce and his penchant for
mangling English. Self-mockery can be funny. Mockery that is insulting
is not. The sort of stuff that would get you punched in a bar can be said
on a dais with impunity.

I'm a big fan of speaking truth to power, but is the kind of confrontation that can get you killed or worse, fired, the only means of getting truth in power's head? What about the jester--the only person talking sense to King Lear in the play King Lear? What about "constructive engagement"? What if I want to speak truth to power and live to tell about it?

The biblical Esther spoke truth to power, I suppose, but first she fattened power up quite a bit--ironically while she herself was enduring a fast. She wound up getting what she wanted. How do we determine what posture to take toward power when power needs a good truth-speaking?
at May 31, 2006 2 comments:

If you tell a joke in an empty hallway, and no one laughs, is it still funny?

What if you tell a joke in a room full of people and no one laughs--is it funny then?

I've been MC-ing the Alpha Course at my church, which has been an ongoing lesson in humility. I occasionally indulge the fantasy of hosting a late-night talk show a la Carson Daley (if he can do it . . .), and I fancy myself a pretty funny guy, but this crowd of Jesus-loving churchgoers started heckling me before I even stepped up to the microphone on the first day, and they haven't yet stopped.

I've felt pretty uncomfortable with the formality of the role, to tell the truth; to prove that Alpha is an opportunity to have fun at church, we have to have one official, formal "joke" as part of each night's festivities. The gag is part of the liturgy, you might say. I'm generally much more comfortable with off-the-cuff, give-and-take banter with the audience, out of which humor generally emerges. So I've actually enjoyed the heckling, for the most part: it's like postmodern stand-up comedy(TM).

What I've not been prepared for is the stunned silence that follows what I expected would at least get a chuckle. Last night I gave a top ten list of signs that your pastor is in need of a vacation. (I got it off the Internet, so it must be funny.) My number one reason was "He's starting to look a lot like Moses--and Moses has been dead for four thousand years." No laughs, no groans, no mutterings, nothing. You could have heard a tree fall in the woods from the comfort of your own living room, that's how dead silent this group was.

In fairness to me, our group was half its normal size, due to the Memorial Day weekend. I like to think that all the really sophisticated senses of humor left town. But it makes me wonder: what's essential to shared humor? What should postmodern stand-up comedy(TM) look like?
at May 26, 2006 6 comments:

It's (Not) Your Thing

I just completed a course on leadership. (You will all bow before me!) One of our assignments was to come up with proverbs related to leadership--little truisms that we've come across in our travels. I immediately and persistently recalled something a friend of mine said about six months into his tenure as senior pastor of his church:

"Being a leader means not getting to do what you want."

I never shared it in my leadership course, because I think it would have derailed discussion somewhat. But I would like to hear what other people thing about it: Is my friend right? Is he way off base? When does a leader get to do what he or she wants, and when does what he or she wants get in the way? And how does this quote relate to our earlier discussion of delegation (see "Delegators in the Sewers"; I can't believe I'm bringing this up after being spanked about it by almost everyone I know).

Please comment freely. I'm looking forward to hearing what you have to say.
at May 23, 2006 7 comments:

Check out my new favorite part of the Bible:

If only you would be altogether silent!
For you, that would be wisdom. (Job 13:5)

A problem with loud time is that it's, well, loud. By championing loud time I don't mean to insinuate that people don't need times of quiet--times where they simply listen to God, times where they simply exist. I ran across a nice conversation about praying between Mother Teresa and an interviewer: "What do you say?" She replied, "Nothing. I just listen." The interviewer countered, "Well, what does God say?" "Nothing," she replied. "He just listens."

I must confess, I'm drawn to this verse from the book of Job mostly because I think it'll be funny to throw at the authors I edit when I think they're rambling. But it's a pretty arresting thought in any context. Here Job confronts somebody who's trying to make him feel guilty for no good reason. But later he realizes he's offended God, so he turns the idea on himself:

How often am I being loud just for the sake of reassuring myself that I still exist? I choose assertion over the simple pleasure of existence. 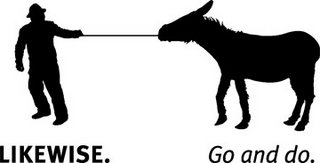 Likewise is a new line of books from my publishing house, IVP Books (an imprint of InterVarsity Press, a division of InterVarsity Christian Fellowship/USA, a member of the International Fellowship of Evangelical Students, and so on and so forth). I've named the guy Tony and the donkey Ferdinand, in honor of Anthony of Padua, the patron saint of donkeys. Check out this wicked-cool legend:

"Anthony (of Padua) once held the Blessed Sacrament high above his head and a
nearby donkey dropped to its knees, causing its owners to convert to
Catholicism; now Anthony is the patron saint of donkeys and horses."

Today I Ate a Dog

So my last post was a whiney rant about being on the receiving end of delegation. Yesterday my wife and I went to a taping of Late Night with Conan O'Brien, featuring his guest Dave Chappelle, and now I feel better.

Chappelle, you may know, became an overnight national sensation with his sketch comedy The Chappelle Show, only to walk away from the show almost before breakfast. He told some of his story to Conan; he took a trip to Africa to "hide," and as he talked there about the stress he was feeling over this sudden influx of money and media attention, an African told him, "We have a saying here that may help you to gain some perspective. At the end of the day each day, I say to myself, 'Today I Ate a Dog.'"

The lesson, for Chappelle and I suppose for me, was that in an age of famine and AIDS, most of us need to remind ourselves to "get over your whiney self."

I'll make a quick case for loud time: Chappelle needed someone other than himself to help him gain perspective; facing his problems in isolation was, for him and I suppose for me, an inescapable dilemma. In that respect, whining about my identity crisis on my blog is better (for me at least; I won't speak for you) than crying myself to sleep at night in my huge pillow.

Delegators in the Sewers (or, Delegator Gonna Getcha!)

Lately I'm finding myself highly irritable in the face of delegation. Maybe it's because I'm so often the delegatee rather than the delegator, but I do have some philosophical problems with the practice.

Now, maybe that's natural, instinctual even, and I should just learn to deal with it. Maybe I'm doing it myself and just don't realize it. And maybe I chafe against delegation because I myself am a horrible delegator and a people-pleaser who nevertheless likes to complain about stuff. (I'm a 9 with an 8 wing--mad props to the enneagram!)

I mean, it's not as though people hold a gun to my head as they ask me to sharpen their pencil or organize their e-mails. I could say no to their requests, even though I've been a yes-man for three-plus decades.

Nevertheless, being delegated to these days is not just a mild irritant, it's a crisis of identity and vocation. Why me? What is making people think they can unload their responsibilities on me? Or am I just putting the best spin I can think of on my own tendency to privilege my agenda over the agendas of others? Am I being too independent or too codependent? Am I being too proud or too meek? Or both? Or neither?

Maybe this is a developmental stage; maybe the inevitable transition from delegatee to delegator starts with this kind of rage against the delegating machine. Maybe I should take some baby steps, get in a little practice. Here goes: Who wants to mow my lawn for me? Anyone? Anyone?
at May 03, 2006 10 comments: