The Sandwich Season: Excerpts from Middling

I write an occasional newsletter (quarterly when I don't forget) to friends and family about my life: music, books, work, and getting older. I'd love to send it to you. Sign up for Middling here. What follows is an excerpt from the summer 2019 issue.
***
I’ve reached the age where the generation behind me is hitting its markers of adulthood. My oldest niece has graduated high school. One of our youngest cousins has gotten married. I had to wear a suit (a jacket, but really what’s the difference?) to the wedding; fortunately it still sort of fit. And then of course there’s the other side, the generation before mine. Health scares among uncles, aunts, and parents. Major moves to ensure they’ll be cared for as they get older. This is the sandwich season, which makes the fact that my suit jacket still fits all the more remarkable. I recently got my hair cut by my wife’s stylist. I like her—she has moxie, and I respect moxie. She told me I was long past due for a grown up haircut (she told me considerably more than that, but I’ll preserve my dignity and spare you the details). She offered to make me look like Christian Bale, and so I am now somewhere on the spectrum between Dick Cheney and Batman. Depends on the day, most days—and a little bit on what I had to eat. 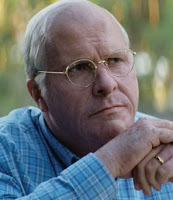 ***
I’m a kickstarter—I kickstart things. Most recently I kickstarted the vinyl reissue of a fantastic record from my young adulthood. Charlie Peacock is a musician living in Nashville, where he and his wife founded the influential gathering place Art House America. He mostly produces music these days, including the late great Civil Wars, but he’ll drop a track or two now and then. Back in the day he straddled two genres: jazz fusion and contemporary Christian pop. That marriage of interests gave birth to some truly distinct music, showcased on his three-volume West Coast Diaries. I kickstarted the vinyl reissue of volume 2. 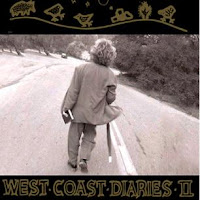 Charlie’s voice is fragile, wispy. You kind of naturally picture him wearing a fedora (the “big man’s hat” of a key track, perhaps) and carrying a messenger bag. But there’s a lot of soul riding those sound waves. Several tracks function as extended riffs, a tip of the chapeau to his jazz roots, with Charlie sparring/dancing vocally with his collaborator the late great Vince Ebo. Some songs are especially plaintive, such as “Down in the Lowlands,” but every track inhabits a similar overall groove, which makes for an especially coherent, groovy record. For my birthday Kara got us tickets to see the legendary Stevie Wonder at Red Rocks Amphitheater just outside of Denver. I only own one Stevie Wonder record but it’s a great one: Songs in the Key of Life, which may be the best album title of all time. It’s from this record that we get the infectious “Sir Duke,” The enchanting “Isn’t She Lovely,” and the desperate “As.” I was pretty young when this record dropped—but in case he hadn’t already, it seems to me Songs in the Key of Life cemented Stevie's credentials as a voice for his generation. And I think he realized it: He sings with a calm and settled assurance that is itself reassuring. My favorite track is the first: "Love's in Need of Love Today." I play it when I need it, and I think you will too once you hear it.
***
Thanks for reading! If you'd like to get Middling in your in-box, give me a shout and I'll set you up.
at May 25, 2020 No comments:

An Exchange I Found Especially Humorous: Excerpts from Middling

I write an occasional newsletter (quarterly when I don't forget) to friends and family about my life: music, books, work, and getting older. I'd love to send it to you. Sign up for Middling here. What follows is an excerpt from the spring 2019 issue, a compare-and-contrast of two visionary books.
***
I've recently read two books that are authors reflecting on and advocating for their particular vision of their particular vocation. One you've likely heard of: Marie Kondo has made a worldwide business of helping people get rid of stuff, taking her most recently to Netflix. The book that made her a phenom is The Life-Changing Magic of Tidying Up: The Japanese Art of Decluttering and Organizing. In it she unpacks her KonMari method, which involves (among other things) holding everything you own in your hands and asking yourself whether it sparks joy. If it doesn't, thank it for its service and send it on its way; if it does, find its proper place in your home. I borrowed this book from a coworker. (I loaned her in exchange the book Messy: The Power of Disorder to Transform Our Lives, by Tom Harford, a book I very much enjoy, and an exchange I found especially humorous.) I found myself largely skeptical about Kondo's book for a couple of key reasons: 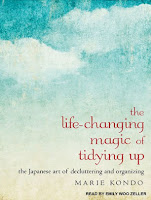 This "Japanese art" is Japanese only insofar as Kondo herself is Japanese. She found a market for her services in Japan precisely because so many people were so bad at dealing with clutter; even her family found her tidying annoying. In fairness to Kondo, she comes off as very much herself in this book--she would have written this book very differently if she weren't Japanese--and she makes no contention that what she's doing is some ancient cultural secret she's bringing to the world. So I blame the publisher for this point: Someone on that team decided the book would sell better if it were classed as a "Japanese art" rather than simply an "art." This prompted a mild ethical dilemma for me, actually, since publishing is my gig: Acquiring authors and marketing their books can, it turns out, come uncomfortably close to cultural appropriation. (That's a long bullet point. I apologize. It makes my next bullet point just a wee bit hypocritical.) For a person whose whole brand is decluttering, Marie Kondo doesn't write especially sparingly. I found myself wondering fairly often when she would get back to the point. Unlike many of my reading and writing friends, I wasn't particularly put off by Kondo's controversial suggestion that you limit your book collection to around thirty titles. (I was more offended that she suggested you keep those books in your shoe closet.) She makes an interesting point about the purpose of the things we have, and she's certainly correct that we read most of our books once if we read them at all, so to keep them around has more to do with our reluctance to let go of things than our desire to be stretched by them. Nevertheless, I haven't gotten rid of any books since reading Kondo's (except hers, I suppose, since I returned it to my friend when I finished it). 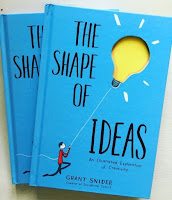 The other vision of vocation I read recently might not qualify in some people's minds as a book. Grant Snider is a comic artist, creating strips under the moniker of Incidental Comics. His strips explore the nature of art, the industry of publishing, and, in this book, The Shape of Ideas: An Illustrated Exploration of Creativity. This book is a curated collection of his previously published work, organized in a way that maps and mines the creative process. He's insightful and soulful, and his art hits far more than it misses. You can read this book quickly, but you can reread this book often. I'm not sure it would make the cut if I limited myself to thirty books, but I haven't put it away since I finished reading it.
***
Speaking of reading, thanks for reading this post! If you'd like to get Middling in your in-box, give me a shout and I'll set you up.
at May 11, 2020 No comments: