Stability Versus Mobility: Excerpts from Middling

I write an occasional newsletter (quarterly when I don't forget) to friends and family about my life: music, books, work, and getting older. I'd love to send it to you if you're game. What follows is an excerpt from the summer 2018 issue.
*** 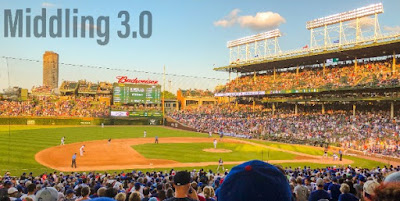 I was born during the summer. My due date was July 4—Independence Day—but I came early. Summer is when people make their exceptional plans: School’s out, so families can travel with minimal logistical complications. There are day camps and overnight camping, road trips to Disneys and bike trips to libraries. There are church camps and mission trips. Summertime is the time of the possible. Kara and I went to Chicago this summer [2018], to catch a Cubs game at Wrigley Field (her first) with her family, and to see as many friends and family members as possible—preferably while eating food you can only get in Illinois. It was a good trip, made more poignant by the fact that we’ve now been Coloradans for nearly four years—if we had moved here as high school freshmen, we’d now be high school graduates—and that returning to Chicago is increasingly logistically complex. We’ve made a life here in Colorado, and there’s a cost to leaving it, even if only for a long weekend. 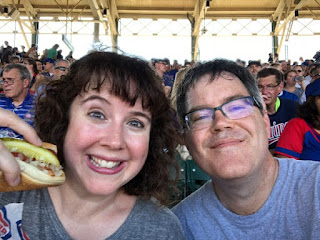 There was a time long ago when a friend and I were toying with a book idea: essentially, “settling down without settling.” That’s the sort of book in which your bias is demonstrated in the title. Try, for example, to apply synonyms to the major words there: “Arriving without declining,” maybe, or (my favorite) “plopping without flopping.” The underlying assumption is that to put down roots in a place is to slam the door shut on every other place, and that only the hypervigilant will retain a life of meaning once they’ve established a life somewhere. I had a friend once tell me, “Never stay when God’s telling you to go,” and he’s right, of course, but even in such a high-minded statement the bias is present: Mobility is (probably) a more divine calling than stability. The more domesticated you are, the (likely) more docile you are. The older I get the more I realize there’s no pithy proverb that can resolve our vocation for us. To stay is good, and there are responsibilities that come with staying; to go is good, and there are responsibilities there as well. There are risks, too, on either side, and so vigilance is required whether we are laying down roots or raising our sails. We are people of a place no matter how transient we are, and we are sojourners no matter how long we stay where we find ourselves. In the meantime, we keep finding ourselves.

TWEET THIS: We are people of a place no matter how transient we are, and we are sojourners no matter how long we stay where we find ourselves.
at July 29, 2019 No comments:

Some time ago now I had a hankering to revisit the myth of Sisyphus. (You can read that here.) I enjoyed the exercise, although I'm sure some of my friends and loved ones found it too dark for their liking; some probably started to worry about me a little. But the myth of Sisyphus is inherently dark. It's probably less a myth than a fever dream, the sort of nightmare one wakes up from not with a bang but a whimper, the sort of thing you write down in a hurry because you don't want to forget it because you think it holds something inherently true even while you're praying it doesn't. It pushes a lot of my buttons, apparently, so I wrote about it, and shared it here, and some of you read it. Thank you. More recently I wondered what would happen if the myth of Sisyphus were to collide with the gospel of Jesus. It's said that J. R. R. Tolkien evangelized C. S. Lewis by suggesting that of all the mythologies of human history, Christianity--the gospel of Jesus--was the one myth that was true. So think of this latest thought experiment as a meeting of the myths. It'd be a kind of crossover epic up there with Predator vs. Aliens if not for the whole point of Sisyphus being the dreadful mundane. In the world of Sisyphus, only a couple of things ever happen: The rock rolls up; the rock rolls down. In the world of Jesus, "the stone the masons threw out is now the cornerstone." In the world of Jesus, the rock that sealed his death was rolled away, inaugurating an age of resurrection. What would happen if Sisyphus, for whom nothing ever changed, were to encounter Jesus, who makes all things new? I've broken this thought experiment into seven "chapters," mainly because no one would read it in one sitting, and because I find it so difficult to come up with content for this blog anymore that I figured I'd stretch it out. So then, without further ado, chapter one.
***
Every day was the same. You started at the bottom of the hill, your shoulder pressed to the boulder, and you began to heave. You might picture the boulder as a perfect sphere, but you’d be wrong. Boulders don’t come that way in nature, and no one in this hellish life was going to go to the trouble of shaping our boulders into things that naturally roll. No, our boulders were rocks shook loose from the earth. They had jagged edges that cut you as you pushed. The loose dirt held there by static electricity ground into your skin. Just to take the position itself was torture. Never mind the pushing. Every heave was painful. New cuts on top of old scrapes, new scrapes on top of old cuts. Gravity was your enemy as the boulder wanted to roll down the hill even as you pushed it up. But that was the job: Push the boulder up the hill. Someone had to do it. Whoever designed this job had it down. My boulder was just large enough, just heavy enough, just jagged enough, to take me all day to get it to the top of the hill. It took everything out of me every day, from start to finish. But I never didn’t finish; I always reached the top. And then the boulder would tumble, slide, roll down to the bottom of the hill, and my day would begin again. Our overseers watched us without emotion. They weren’t sympathetic to our plight, but neither were they unsympathetic. This was the job—it was for them to watch and for me to push. We accept the reality we’re presented with.
***
Tune in next time for chapter two, wherein our hero meets a stranger who says strange things and asks troubling questions.
at July 22, 2019 No comments: