In this post: When I was your age, you didn't download a song off the internet. You didn't even listen to it streaming on the internet. You didn't even order it from a store on the internet. You bought it at the mall, and you took it home, and you took it out of a paper sleeve, and you put it on a record player. And a needle read that song off a disc spinning at 45 revolutions per minute. I have today reached the age of 45, and yet I grew up in the age of 45s - a generation much like this, in which singles are king and full length albums are for suckers. The pop age of today is like the disco age of my youth, when older artists struggled to remain relevant while young, fresh faces put confection after forgettable confection in front of children and encouraged them to imbibe. Rarely can a child appreciate the full canon of an artist's work, reaching past the hits to the deep tracks that extend the listening time of the slow-spinning LP record. A child's world is pop-pop-pop, defined by the radio and (soon enough) the video. Two songs by the same artist--the A side of the 45, reserved for the officially released, radio-friendly track, and the B side, often assumed to be a throwaway just filling empty space--test the tolerance of a kid, let alone a full album's worth; 33-1/3 revolutions per minute are, with few exceptions, wasted on the young. So, when I was a kid, I rarely listened to full-length albums, preferring instead to play the A side of a 45 and, if I were inspired or even just lazy, flipping the 45 over and listening to the B side. The two 45s seared into my memory from childhood are very different from one another, but I loved them both. 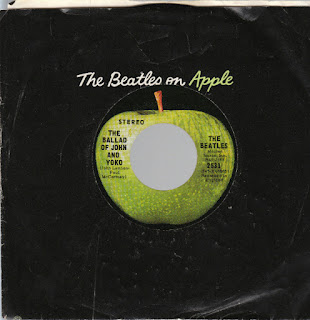 The Ballad of John and Yoko
"The Ballad of John and Yoko" is a jaunty, jaded journey through Europe. Performed by the Beatles, it's a song of a particular moment, a commentary on his current reality that would come to characterize much of John Lennon's solo work. I have no idea what John is singing at times, but I like this song a lot, particularly Paul McCartney's background harmonies and prominent bass line. On the B side was "Old Brown Shoe," written by George Harrison. More a product of its era, it sounds unlike most Beatles songs, foreshadowing again George's solo work to come. This song was a rocker, and I loved it in a way that made me more open to B sides and other deep tracks to come. 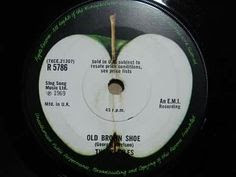 Old Brown Shoe
The other 45 I wore out as a kid featured two songs by, of all people, Nancy Sinatra. Like the Beatles 45, I inherited this from some uncle or second-cousin-once-removed; I would never have found it on my own, because even if it had graced the radio in its first release, those days were more than a decade gone. But its tracks reflect an entirely different popular genre from the Beatles. Hers was what came to be known as "incidental music," the music of camp. "These Boots Are Made for Walkin'" is as American as the Beatles were British; it had a great, catchy bass line too.The boots were surely go-go boots, zipped all the way up to the thigh. I was, frankly, less likely to flip this 45 over from the A side to the B side, but I was occasionally in the mood for "The City Never Sleeps at Night." There's a 60s-era New York sensibility to this track that I like. These songs exiss as singular entities, but they also play off each other, A side and B side, to give a fuller portrait of the artist. We consume the A side, we discover the B side. You don't get a B side when you download a song off iTunes; music streaming services leave artists behind after one track in search of something sonically similar. The gateways between music consumption and musical discovery are no longer easily accessible to us. For my birthday this year, I'm hoping you'll accompany me on a journey of musical discovery. I'm asking you to recommend 45s to me - two songs by artists you appreciate: a popular, released track, along with deeper tracks that are less familiar to the masses but that demonstrate why you're a fan. List them here in the comments, post links to my social media, whatever you like. I hope you'll include in your recommendations a comment on what makes these songs great for you, or a story that explains why they linger in your memory. I'll expand my musical library based on what you recommend. And if I'm not too intimidated by the technology, I'll build a playlist of all your recommendations on Spotify, so we can discover some great music together. "A splendid time," John Lennon once promised from the B side, "is guaranteed for all."
at June 29, 2015 3 comments:

My Top Five Superheroes (and Why)

My sister asked me, the other day, to list my top five superheroes. She may have been fishing for birthday ideas; she may have been looking for ways to raise her son's standards higher than Hawkeye. Whatever the case, I gladly listed the following (in order): I struggled more than I expected to finish this list. The top three were easy; the bottom two were hard, and I suspect that I'll second-guess this list even before I post it. But I do notice some commonalities: Daredevil, as ably demonstrated in the Netflix series of the same name, sets his focus on Hell's Kitchen in New York, a neighborhood that has never enjoyed the benefits of New York's hubris. While the Avengers are saving New York from giant robotic lizards coursing through a wormhole to another universe in the skies above, Daredevil is confronting drug dealers and dismantling crime networks in the same span of city blocks he grew up in and refuses to leave. Batman and Robin are inextricably identified with Gotham City, which is Superman's Metropolis after the lights have gone out. Although their adventures have taken them to the farthest reaches of time and space, Gotham remains a principal character in their story. It's no surprise, in fact, that the city has its own television series; place matters supremely in the Batman universe. Captain America's association is right there in his name. He was created jingoistically; his first cover shot as a superhero showed him punching Adolf Hitler in the nose. In his first iteration during World War II he was a salute to the greatness of his country of origin, but in subsequent iterations, beginning in the comics in the 1960s during widespread civil unrest and carrying over into contemporary films with the cynical sensibility of the postmodern age, he represents the tension between our sense of our national potential and our unease of our tragically flawed history as a country. Of all five superheroes, Moon Knight is my least familiar and also the most tenuous connection to a place. Whatever power he has comes from Egypt, but he locates himself in New York - except when he doesn't, when he moves to the West Coast or meanders throughout the world. There's a kind of schizophrenia to Moon Knight's story; his superhero persona is only one of the many characters he plays in his life, and his sense of dislocation does damage to his relationships and even his psyche. Maybe that's why I'm so intrigued by him; Moon Knight is what happens to us when we aspire to greatness but lose sight of our placedness. Obviously there's more to the story than placedness with these characters. Three of the five have capes; two of them don't. I don't think that's overly significant, although a childhood fascination with comic book superheroes surely has something to do with the color and fluidity of the art. It's sort of trendy to claim that placedness is the primary driver of my hierarchy of superheroes; I recognize that. But the fact that place is one of the particularly cool things about these heroes is not lost on me, and I wonder how much their broad acceptance in the broader culture (with the exception of the relatively rootless Moon Knight, all of them have a strong foothold in pop culture) is tied to the idea that a particular place breeds a particular kind of hero - the hero a place needs, the hero each of us could commit ourselves to being.
at June 22, 2015 7 comments: