I've recently begun reading the collected novels and short stories of Sherlock Holmes as written by Arthur Conan Doyle. I'm a trend-hopper, I admit it. I geeked out over Sherlock and enjoyed the different angle on Elementary; I even like Robert Downey Jr.'s turn in two films that imagine Holmes and Watson as the original dynamic duo, the earliest ancestors of Batman and Robin, Butch Cassidy and the Sundance Kid, Riggs and Murtaugh, and the Men in Black. So, in between seasons, I thought it'd be fun to read the stories, set in their original context of late-nineteenth-century London. I was thrown by the horse-drawn cabs, the handwritten letters, even the "evening newspaper." But the thing that really threw me was the notorious absence of Holmes's catch phrase: "Elementary, my dear Watson." 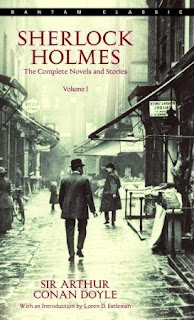 I'm 900+ pages into volume 1 and not once has this phrase appeared. I recall one time Holmes described some conclusion as "elementary," but only in passing. I recall one time he referred to Watson as "dear," but in that case Watson was "my dear friend" - hardly a string of words for the ages. I'm led to surmise that catch phrases aren't a product of Victorian England; they belong, rather, to Hollywood. Do you want to know what does, apparently, belong to Victorian England? Writing tics and lazy editing - in this case, in the form of the archaic word singular. Google singular and you'll be directed to 26 million occurrences on the Internet. But at least for me, the first occurrence declares it a typo: according to drugs.com, "a common misspelling of Singulair. Singular (montelukast) is used for the prevention and long-term treatment of asthma." That in itself is lazy editing, since clearly "Singulair" is a portmanteau created, probably by someone in Hollywood, for the pharmaceuticals industry. The word singular apparently dates back to the fourteenth century, derived from an old French word which itself was derived from Latin. Singular is defined by the Online Etymology Dictionary as ""alone, apart; being a unit; special, unsurpassed," which is basically how it's used in the adventures of Sherlock Holmes, ad nauseum.

TWEET THIS: Do you want to know what does, apparently, belong to Victorian England? Writing tics and lazy editing. Seriously. At least once in every story I've read so far. Usually at least twice. Sometimes twice in the same paragraph. The author, Sir Arthur Conan Doyle, describes cases, visages, personalities, weather patterns, meals, mornings and evenings as "singular." I find that a bit ironic. That's the correct use of ironic, right? I track the use of singular in Sherlock Holmes stories with the same glee and cynicism with which I tracked the use of "at this juncture" by my college political science professor. Such is the social dysfunction of an editor that other people's communication foibles simultaneously annoy and fascinate me; I'm more impressed with myself for having noticed this tic, and I elevate my own editorial competence by inwardly shaming the editor who let Sir Arthur Conan Doyle get away with it. It's one of the many ways that I dehumanize people: I make fun of how they write. And honestly, it's pretty easy to dehumanize Sir Arthur Conan Doyle and his editor. For one thing, they're dead; they can no longer dehumanize me back. For another thing, their humanity has been in some ways eclipsed by the enduring notoriety and cultural resonance of this character they curated over the course of many years and pages. It's Holmes we care about, and to a lesser extent, Watson; Doyle and editor X are beside the point. Holmes himself is not quite human; he's an icon of rationalism, noticing and following the evidence systematically, cooly and objectively. Emotions are a distraction to him; relationships are an acceptable inefficiency. We accept this about Holmes, even celebrate him for it. But occasionally Sir Arthur Conan Doyle reminds us that Holmes is human too, as in this scene, from "The Adventure of the Six Napoleons":

Lestrade and I [Watson] sat silent for a moment, and then, with a spontaneous impulse, we both broke out clapping, as at the well-wrought crisis of a play. A flush of colour sprang to Holmes's pale cheeks, and he bowed to us like the master dramatist who receives the homage of his audience. It was at such moments that for an instant he ceased to be a reasoning machine, and betrayed his human love for admiration and applause. The same singularly proud and reserved nature which turned away with disdain from popular notoriety was capable of being moved to its depths by spontaneous wonder and praise from a friend.

So there you have it. Sir Arthur Conan Doyle made Sherlock Holmes blush. He even stuck a singular in there, and the scene remained heartwarming anyway. It seems Holmes and Doyle are both human after all. And if Sherlock Holmes can blush, then I suppose there's hope for the rest of us. 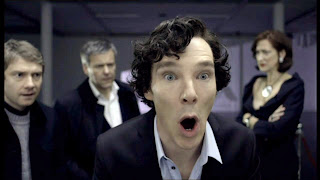 Rev. Tracy said…
I, like you, am a bit obsessed with the stories of Sherlock Holmes stories since the BBC series Sherlock. I too have noticed the overuse of singular. Did you happen to count the number of times? Really curious!
2:47 PM

Anonymous said…
I actually found this post looking for information on how many times the word was used. You must forgive it though and the editors, because remember these stories were published in newspapers and magazines. There was no common editor most likely. And they were written over the course of many years. They were standalone short stories for the most part. That is the only reason I excuse the over use of the word. Still I wonder how many times it has been used. Although I admit I am too lazy to count them myself.
8:58 AM