Charlie Chaplin: The Cautionary Tale of a Missional Genius

My boss sometimes takes me to bookstores. It's not a habit of mine, oddly enough, even though I'm a book editor and a lifelong reader. It's the sort of thing I'm supposed to equate with nerd heaven, and I do enjoy it, but it's not something I regularly indulge in. But when my boss takes me to a bookstore, I like to pick something up, especially when the bookstore is an independent. Most recently we went to the Tattered Cover in Denver, a sprawling store in the classic sense. Picture tall shelves with rolling ladders. Picture effusive recommendations from staff. Don't picture music or teapots or "Readers do it spine-out" bumper stickers; true believers don't need such ornamentations. Tattered Cover is a booklover's bookstore. I wandered the shelves, making mental notes, but the book I bought was in the last place I looked: Charlie Chaplin: A Brief Life is a relatively new biography of the most celebrated actor of the silent film era, the first worldwide celebrity, the icon of a generation. I've watched many (though by no means most) of his films and remember Robert Downey Jr.'s portrayal from the 1990s, but I'd not dug into his story. Now seemed as good a time as any. 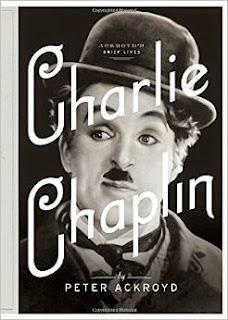 Watch early talkie movies and you'll quickly see how married to the stage the medium was. The actors deliver their lines to the back row of the theater, not to the overhead boom, and their reactions are exaggerated in ways that film doesn't require. It was in the silent era, the age celebrated in the recent film The Artist, that the particular strengths of film as a new medium were explored and tested. One director cut every fourth film cell to his action scenes to give a heightened sense of frenzy; chases and other intricate scenes were carefully choreographed so that the impossible seemed both unavoidable and entirely natural. Early films were short - around eleven minutes on average - but they packed a lot of punch. Chaplin came up in the theater scene and honed his craft mainly by observation. His capacity for acting drunk became legendary; his lampoons of class divisions were spot-on. But the thing that struck me, the thing that took his work from caricature and spoof to high art and cultural relevance, was rooted in observation. In the first days of his foray into film, after success in vaudeville in Britain and the States,

He wandered for some days among the actors and sets without actually being assigned a role. Then the moment came. ... He was not yet the Little Tramp; he was reprising the role of stage villain complete with cravat, top hat, monocle and costume. He had become a "dude" or seedy "toff." In this first film he is insidious, wheedling and oddly threatening. When he kisses a girl's hand, he then goes all the way up the arm. That is an early Chaplin touch. He was rpobably the first to do it on the screen. He already has a full range of facial mannerisms, twitching and smiling and scowling. He also tries out a distinctive walk, the ancestor of a more famous one. ... Moving Picture World said that "the clever player who takes the part of a sharper ... is a comedian of the first water."

Observation is the first virtue of comedy and really any meaningful engagement of society. I once heard theologian Soong-Chan Rah tell an audience of missionaries, "If you seek to change a city without first becoming a student of that city, you're not a missionary, you're a colonialist." Acting without first observing is destructive and is ultimately exposed as artifice, as imposition - at its worst, as violence. But critical observation that informs action is almost inherently transformative. The student of a culture, whether that culture is film or fashion or faith or something entirely different, discovers what that culture values, what it fears, what it longs for, what it assumes to be true. Even the culture under consideration is not as aware of these things as its student. We need the student, ironically, to teach us who we are and what we need.

TWEET THIS: We need the student, ironically, to teach us who we are and what we need. With the release of Kid Auto Races at Venice, his second or third film (the sequence is unclear, but shot within five days of his first film), Chaplin had discovered the character his audience wanted: a Little Tramp, clearly conscious of high society but far removed from its benefits, never welcomed into the in crowd but never defeated by its rejection. He is the outsider looking in, lifting up society's quirks for society to laugh at, making a hero of an outcast.It is this character, who will evolve over the course of many films, who becomes known the world over and who will define the new art form of film.

He is already dressed in a distinctive fashion, with clothes that are too small for him. ... He "hogs" the scene, serenely self-confident of his own image and aggressive to those who hinder his presentation of himself. He is bristling with the desire to perform. He gets in the way of the camera filming the races, and resists every attempt of the director to exclude him. He wants to commune with that camera but, more significantly, with the vast and unknown audience that is assembled behind the lens. He sets up a direct relationship with those who are watching him, both mocking and conspiratorial. ... He is absurdly solipsistic, as if to say that only he matters. Only he is worth watching. Chaplin would maintain these sentiments for the rest of his film career.

Film is barely a thing, and already Chaplin has knocked down the fourth wall separating the actor from the audience. This is, in fact, what they want - in an impersonal, detached medium Chaplin has supplied personal connection and attachment. The audience identifies with him; they cheer him on even as he violates social protocol right and left. Armed with that trust, Chaplin will go on to expand and ennoble the craft of filmmaking; no longer confined to slapstick, the laughable Little Tramp becomes our guide into a world in which the poor cannot escape poverty because the system is hard-wired against them. Chaplin had learned early on, in his stage career in London, the proximity of laughter to lament. As actress Marie Lloyd told him, "I believe that's what real comedy is, you know, it's almost like crying." And yet this lament that Chaplin led his audience to was never the final word: The young man who overcame adversity to become the most recognizable person in the world would end his films with a kick of the heels and shuffling strut off to his next adventure. In the world Chaplin observed and acted upon, there was always hope and never defeat. This was Chaplin's genius, and it is a good model for those of us who follow Christ to emulate. We study our society, we learn what is laughable and lamentable about it, and we bring it to the foreground so that it is no longer overlooked. We help those around us to see what must be seen, and we offer hope that what we see will not defeat us.

TWEET THIS: We help those around us to see what must be seen, and we offer hope that what we see will not defeat us. If that were all there was of Chaplin's story, that'd be a great thing. But Chaplin has sixty-some years to go, and while much of his art is brilliant, much of his life is tragic. The rewards he earned for his careful observation and sympathetic portrayal went to his head. There's little worse than a student who thinks they have nothing left to learn. Chaplin was officious and tyrannical as a director, going so far as to ignore obvious gaffes in his films because he was convinced the audience would never notice them, being as focused as they were on his performance. He was notorious for his treatment of women, most of whom began as muses and ended as used-up lovers. He liked young girls for their innocence, but he repeatedly stole innocence from them. He visited the tenements of his childhood but recoiled at the notion that he shared anything in common with their occupants. And over time this hubris affected his art as well, so that his characters became less a portrayal of Everyman and more a patronizing send up of everyone but himself.

TWEET THIS: There's little worse than a student who thinks they have nothing left to learn. Chaplin's tragic story has lessons for us as well: our successes in life don't make us better than our neighbors, and the true student of society never graduates. We've never fully uncovered the mystery of our neighbors, and whatever story we might tell on their behalf is never complete. It is always an honor, always a burden, and however we tell such stories, we must always look not just for what's laughable or lamentable in it but for the defiant hope on the other side of it. Without hope, even our most profound portrayals degrade into caricature. Without hope, all comedy degrades into tragedy.
at May 04, 2015 4 comments: