I write an occasional newsletter (quarterly when I don't forget) to friends and family about my life: music, books, work, and getting older. I'd love to send it to you. Sign up for Middling here. What follows is an excerpt from the fall 2019 issue.
***

Every September I attend a retreat for the Academy of Christian Editors. A feature of that retreat is a sharing circle where we each get roughly a minute to introduce our favorite book we read over the past year. You can see this year’s complete list here.

I had a number of books that came to mind, including the one I was still reading as I flew to Nashville for the retreat: The Nickel Boys, by Colson Whitehead. This novel inspired by true events is set in the mid 1960s at a “reform school” for boys. All the students are tyrannized by the staff, but the black kids are routinely terrorized and brutalized. Whitehead is a master at creating characters and carrying the reader into and through terrible things, and he does so here again. Schools like this one existed in my lifetime. Maybe they still do. I’m haunted by that: How many other atrocities are we allowing to exist, and why are we allowing it?

But I hadn’t finished The Nickel Boys yet, so instead I put forward Mandela and the General, a beautifully drawn graphic novel recounting the true story of how newly elected South African President Nelson Mandela, who was actively dismantling the century-old system of apartheid that had privileged whites over people of color, met with and earned the respect and loyalty of the leader of a nationalist resistance group bent on taking South Africa back for the whites. A story I’d never heard before — powerful, compelling — and nobody else had picked it. #winning
***
Thanks for reading! If you'd like to get Middling in your in-box, give me a shout and I'll set you up.
at September 21, 2020 No comments:

I write an occasional newsletter (quarterly when I don't forget) to friends and family about my life: music, books, work, and getting older. I'd love to send it to you. Sign up for Middling here. What follows is an excerpt from the fall 2019 issue.
***
I may have let my discipline slip a bit lately. I’ve been indulging my interest in vinyl a lot this year, which is at odds with my original purpose for switching to vinyl-only, which was to force myself to be more discriminating. Vinyl records are expensive and they take up a fair bit of space. But it can’t be helped when there’s so much good music to keep up with.

A lot of my new albums are not new, however. Case in point: You’re the Man by Marvin Gaye, the (intended) follow-up to his 1971 release What’s Going On. The record was shelved until this year, when it was released to mark the late artist’s eightieth birthday. I picked it up on Record Store Day in April. It’s a double-album, but the second disc is just b-sides and alternate takes, even a Christmas song. I lean hard into the first disc, and particularly side one. The title track is a nice jam that holds up well as an exemplar of its era; my favorite track is “Piece of Clay,” not written by Gaye but delivered with his signature passionate wisdom:

“That’s what’s wrong with the world today:
Everybody wants somebody to be
Their own piece of clay.”

For my birthday this summer I asked for and received a vinyl edition of an album I loved when I was not yet married, Tanita Tikaram’s 1988 debut Ancient Heart. I already had it on CD—like I said, I’m not very disciplined these days—but I wanted to hear it scratched out at me at 33 revolutions per minute. Tikaram was, at the time, being compared to Van Morrison and other resilient voices; I eventually would buy her second disc and lost track of her after that, but something about this album really did it for me. Her breakout hit was “Twist in My Sobriety,” but every track has gravitas to it—even the sing-songy ”Poor Cow,” which my friend Chris and I would play on our college radio program as we announced the cafeteria’s lunch menu for the day. “Slice her up, slice her up, slice her up, poor cow.” Turns out I wasn’t very disciplined then either.

Teaspoons of Something or Other: Excerpts from Middling

I write an occasional newsletter (quarterly when I don't forget) to friends and family about my life: music, books, work, and getting older. I'd love to send it to you. Sign up for Middling here. What follows is an excerpt from the fall 2019 issue.
***
Twenty-five years ago I was a twenty-four-year-old man-child in the throes of newly wedded bliss. Kara and I got married a few months after she finished her undergraduate degree. Our church at the time met in a rented theater, so to hold our wedding service we had to rent a church. Our friend Keith performed the ceremony, his first ever wedding. I remember he wished us ladles of honey for every teaspoon of something else—vinegar, maybe? Our wedding was an over-the-top affair, with a guest list that included pretty much everyone we ever met, testing the credit limits of both our sets of parents. Then we settled in to married life. There have surely been teaspoons of something or other over the years, but we’ve had plenty of honey to wash it down. This month we celebrated twenty-five years with a vacation in Maui, Hawaii. We were a few steps from a beach and a few more steps from a donut shop (malasadas in the local lingo). We drove the Road to Hana, a long and winding route that is more about the journey than the destination, with plenty of stops along the way to see beautiful things. Not a bad embodied analogy for a marriage—or for life itself, I suppose. 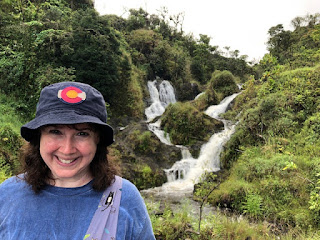