I recently attended a reunion of my mother's family. Not everyone in the family was there, but it seemed at times as though everyone in the world was there. The Gradys are Irish Catholic, which means they are both prolific and prodigious. And well-lubricated; in addition to two Grady-reunion-themed t-shirts we each went home with a Grady-reunion-themed pint glass - an appropriate memento if ever there was one. I had to leave early the day after the reunion for a cross-country road trip, so while I got to enjoy the fun of the reunion, I missed what might have been the most memorable part of the weekend. My uncle, the priest (now retired) offered to have the family over to his house for Sunday morning mass. Now, I'm not sure who all went - a few of my uncles, aunts and cousins have left the fold over the course of their adulthood - but my uncle the priest estimates about a ton and a half's worth of people showed up for the Eucharist. (That may be his subtle way of suggesting that some of us need to lose some weight, but I'll give him the benefit of the doubt.) I've heard of ministers comparing attendance numbers, but I've never heard of them calculating by tonnage. Anyway, at some point that morning the mass was interrupted by what my uncle describes as the "big bangs."

We have photos from the crawl space beneath the living room in my house. Two of the three bricks that, together with a cinder block, support the floor joists are cracked.

There's a joke in there somewhere. And if not a joke, there's at least a sermon illustration. I can't really think of one, but maybe you have ideas you can share in the comments. I'm no great fan of church construction; I think a lot of money goes into it that could be better spent on other things. Moreover, I think often church architecture enhances the separation of the church from the world around it, and subtly trains congregants to assume a fortress mentality, as though the church is their only protection from the world, as though their first priority ought to be protection from the world. I rather like the idea of something so quintessentially Christian as liturgical worship being celebrated in a family room packed to the gills with rough-and-tumble guests. It's a dynamic tension that, apparently, can make a big impact. It's a potentially atomic mass. Anyway, no one was hurt at the extra-dense mass in my uncle's family room, although apparently none of my family members saw anything wrong with sending my cousin into the crawl space of a house that could collapse at any moment. My uncle is looking into what would be involved in repairing or replacing the damaged bricks. In the meantime, I'll keep thinking about what jokes, and what applications, can be culled from this momentous mass. I welcome your help to that end.
at August 11, 2014 No comments:

I suppose that's what trees do: they produce leaves; it's part of the natural order of the universe. But by bungling the phrase Biff draws our attention to what's more obvious about trees: they stay. Often -- barring any disruptive event (say, deforestation) -- they stay for centuries. And yet Biff remains essentially correct: trees also "leave," by which I mean they generate leaves, which eventually fall off and mulch the ground, each tree's own little contribution to the circle of life. As fiercely protective as trees are of their roots, enabling them to out-stay virtually everything around them, they are also decidedly prodigal with their leaves. This is meaningful for me these days, as my wife and I prepare to leave our house of thirteen years, my home city of twenty-two years and her home city for her whole life. We're moving from greater Chicagoland, where it often seems we know everyone, to Colorado Springs, where we know virtually no one. We're making like a tree and getting out of here. 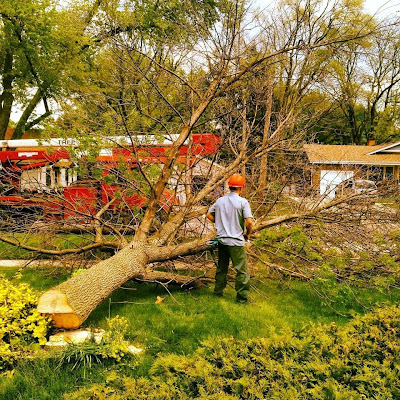 But that's only part of the story, isn't it? Even when trees uproot -- when they're burned by fires, which occasionally happens in Colorado, or when they're blown over by storms, which occasionally happens in Illinois -- they are still participating in the ecosystem in which they were planted. When anything ends, it becomes the incubator of something new; it's the great economy of creation and the triumph of the God of the living over the tyranny of death.

TWEET THIS: When anything ends, it becomes the incubator of something new. http://loud-time.blogspot.com/2014/08/on-making-like-tree.html I recently read some thoughts on trees from Andy Summers, the guitarist for the Police, in his memoir One Train Later:

"Guitars begin as trees, float down rivers, get hauled into lumberyards, are sawed into planks, and then are dried, cured, and left to age. They arrive in the player’s hand still with the memory of a tree, atoms and molecules reforming to become a guitar. A history begins; fate is determined; events take shape."

I like this. Before a guitar is a guitar, it's a tree. A tree gives up something true and beautiful about it, and through a careful, deliberate process it becomes something out of which truth and beauty can flow. Its treeness remains, but now its guitarness can take shape. It's part of the calling of every human, I think, to make like a tree: to take root, and to bloom and blossom, to offer shade and support to the ecosystem we find ourselves in; but then also to leave, and in that leaving to make new and different contributions to the world around us. They may be less, they may be more, they may cost us much, but they are ours to make, and we do no good if we refuse to make them.

TWEET THIS: It's part of the calling of every human to take root, but then also to make new and different contributions. So we're making like a tree, and we're getting out of here. And when we arrive in our new place, we hope to make like a tree, lay down roots, and give ourselves to something new. It's scary, and it's costing us a lot, but it's what's next for us. Moving is like a death. It's worth mourning as such. But it's also a new beginning; indeed, the death itself contributes to the new thing being created. We're grieving our leaving, but we're eager to plant new roots and start our new life. 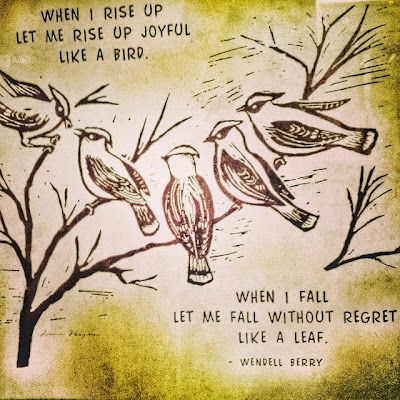