Happy Thanksgiving! A litte Sly and the Family Stone to put you in the mood.

A psalm. For giving grateful praise.

Shout for joy to the LORD, all the earth.
Worship the LORD with gladness;

come before him with joyful songs.
Know that the LORD is God.

It is he who made us, and we are his;
we are his people, the sheep of his pasture.
Enter his gates with thanksgiving

and his courts with praise;
give thanks to him and praise his name.
For the LORD is good and his love endures forever;

his faithfulness continues through all generations.
at November 24, 2011 No comments:

I suppose that I will be forevermore plagued with the sick expectation that sermons preached about pride, narcissism, egocentrism, selfishness, and other related behaviors and outlooks will reference my book Deliver Us from Me-Ville--this despite several instances of frustration to date when preachers have failed to reference it. But the topic still holds my attention, three years after the book's release. So I was pleased to read, of all things, Sarah Silverman's insights into the root causes of self-aggrandizing behavior in the recent "comedy issue" of Entertainment Weekly. Here it is; I hope you like it as much as I relate to it: 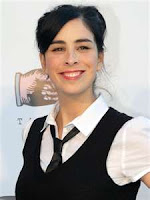 Hecklers are a heartbreaking breed, desperate to connect at any cost, positive or negative. Like a kid acting out for attention — even if they get spanked, at least it's contact; even if they get punished, at least they've garnered focus. When I get heckled, I tend to give the heckler what he wants — attention; to be ''mirrored,'' as the shrinks say. Sometimes I do an impression of what they probably won't be saying the next day: ''Oh, man, remember last night when I was like, 'You're f---ing Matt Damon!!'? That was so awesome!'' (Just to be clear, this is by no means encouragement — if the heckler spells trouble or f---s up my timing, they're skillfully escorted out by very subtle yet giant men.)

A guy once just yelled, ''ME!!'' in the middle of my set. It was amazing. This guy's heckle actually directly equaled its heartbreaking subtext — ''me!!'' Another time I was listening to Howard Stern and a young listener called in. He was being an a--hole so Howard hung up on him, but just before he was disconnected I heard him say, real quickly, ''I exist!'' Those were the only two times I ever heard a heckler say what he really, REALLY meant. I am real! Even if I make you mad, Mommy/Daddy, it's still proof — I EXIST!

Portrait of the Artist as an Angry Young Man: My Goodreads Review of Joe Jackson's A Cure for Gravity

A Cure for Gravity: A Musical Pilgrimage by Joe Jackson
My rating: 4 of 5 stars

Some of my friends probably wouldn't buy it, but I was a pretty melancholy kid. Stuff affected me pretty heavily, from the offhand comments of kids and adults who didn't know they were being mean to the scenes from movies that didn't know they were being poignant. My melancholy extended to music and particularly music videos, which I watched with cultlike devotion. Among the more resonant are a couple of Joe Jackson songs off his album Night and Day: "Breaking Us in Two," in which a woman packs her things and walks the long cobblestone road to the train station to start a new life, only to then gain some fresh perspective on her current life; and "Real Men," in which a young boy (probably about my age) struggles in vain to understand what constitutes masculinity. It wasn't till twenty years later that I actually bought any Joe Jackson music, first the single "Common People" that he did with William Shatner (buy it; it's killer) and then the two-disc retrospective of his long career, which includes his hits "Is She Really Going Out with Him?" and "You Can't Get What You Want (Till You Know What You Want," and a wide variety of other songs. Jackson is an eclectic songwriter, drawing on his classical training and jazz interest while working hard to remain true to his working-class roots and connected to a real, popular-level audience. And yet he's something of a perennial outsider, never quite at home in any environment. The videos for both songs that resonated so strongly for me have him not as the love interest or the protagonist but as narrator/commentator, in but not of the story being told; his pop music has always reflected his appreciation for other genres, and his forays into other genres have never shed his identification with pop.

That homelessness carries through his book A Cure for Gravity, written before "Common People" but well after "You Can't Get What You Want" fell off the charts. I found myself comparing the book regularly to Steve Martin's Born Standing Up, which covers a similar time period and point in an artist's blossoming career: Martin writes up to the point where he moves from stand-up comedy to film acting; Jackson writes from childhood through to the release of his breakout album Look Sharp! Both writers are philosophical about their craft and the culture they inhabit, but the books remain quite different, demonstrating the divides of chosen art form, age (Martin is nine years older than Jackson, a fact reflected heavily in how each experienced the 1960s), place of origin (wide-open Texas for Martin; working-class north England for Jackson) and outlook. Martin writes seemingly from retirement, with the voice of someone looking back on a life of relative ease; even his hardships are cast as welcome learning opportunities, and his point is, more than anything, appreciation for life and what comes of it. Jackson's book is roughly twice as long and reflects a hardscrabble life, a perpetual outsider's look back on what he's struggled to make of his world. His portraits of influential people aren't uncharitable but they are sometimes startlingly frank. He's not retiring or even resting as he writes; his long passages of memoir are frequently supplanted by well-considered arguments about the public role of music, the responsibility of artistry, the twin temptations of both a cultural aristocracy and a consumerist culture that rejects challenge and demands to be catered to. Martin writes a memoir; Jackson writes an "agendoir."

I don't mean that as a critique, although I did occasionally find myself silently accusing Jackson of the pretentiousness that he often defends himself against throughout the book. I find his argument for/against pretentiousness pretty compelling, however. From pages 84-85: "All those old structures [of musical training and apprenticeship] have broken down, and now anyone with a few quid to spend can simply walk into a record shop [note: written in 1999; now you don't have to walk anywhere] and choose from five centuries' worth of music from all over the world. . . . All very well for the 'consumer,' but how often do we consider how it affects the artist? Where does he start, when everything is transient and disconnected? How does he know who to be, when his roots are themselves rootless? . . . Sometimes I think that categories are proliferating to such an extent that nearly everyone, eventually, will be a subgenre of one. Maybe then we'll appreciate content a bit more than style--or rediscover the true meaning of style."

Leave it to Joe Jackson, perennial outsider, first-person observer/narrator of the vicissitudes of life, to take the opportunity to write a memoir and turn it into a manifesto for artists. The book is at times abrasive, occasionally self-indulgent, sometimes indecipherably British. But it's one of my favorite books of the year, partly because Joe Jackson has proved throughout his career that he knows how to get to me, and partly because he's more or less right about the public role of music, the responsibility of artistry, the twin temptations of both a cultural aristocracy and a consumerist culture that rejects challenge and demands to be catered to. Partly, also, because I was too young to enjoy the New Wave that Jackson represents as it was happening, and I relish every window into it I come across. So, for all its pretentiousness, for all its uncomfortable frankness, for all its commingling of autobiography and cultural agenda, I'm thankful to Jackson for writing A Cure for Gravity, and I anticipate dipping back into it now and again to revisit my own past and to get insight into my own future.

View all my reviews

Apocalypse Remixed: The Revelation Will Not Be Televised

Every once in a while the song "The Revolution Will Not Be Televised" by the late great Gil Scott-Heron sneaks into the queue on my iTunes, and I'm taken immediately back to my American history class with Dr. Weiss, where I first heard it alongside "Street-Fighting Man" by the Rolling Stones as an example of late-sixties ennui. But along with the nostalgia is something of an apocalyptic vision of the future. I think of this song as the kind of vibe we out to assign to the end of this world and the inauguration of the next--not the "nah nah--enjoy hell" scorn of the Left Behind set, not the disaster-addiction of the Mayan-calendar Schwartzenerds, not the often tragically wonkish numerology of the cultists. The Revelation (and the "everything new" it heralds) is the sort of thing that offers hope even as it rages against the status quo. Dietrich Bonhoeffer suggested that Jesus judges us even as he saves us, and such an audacious event as the end of the world ought to inspire us to a similar work in the songs we sing and prophetic words we utter. So, with apologies and respect to Gil Scott-Heron, here's a twenty-first-century spiritualized remix of a classic song with an eye toward the future.

There will be no pictures of you and Harold and Kumar
pushing that shopping cart down the block on the dead run,
or trying to slide that color television into a stolen ambulance.
Drudge will not be able to report the winner at 8:32 or offer sound bites from 29 districts.
The Revelation will not be televised.

Jersey Shore, Jerseylicious, and CSI New Jersey
will no longer be so damned relevant, and
no one will care if Chloe and Lamar can keep it together
Because people in darkness will take to the street
Looking for a brighter day.
The Revelation will not be televised.

There will be no tweets or Google plus ones or status updates
No streaming video of hairy armed liberationists
And J-Lo blowing her nose.
The theme song will not be written by Ke$ha or Katy Perry,
Nor sung by Toby Keith, Keb Mo, Kanye West, Kelly Clarkson, or the Killers.
The Revelation will not be televised.