The Fight or Flight of the Bumblebees

When I was very nearly five years old, my brother and I would regularly cross the street to play with our neighbor Jimmy. On one such occasion, we were running around the house over and over again (like you do) when we stumbled into a swarm of bees. My brother and Jimmy, being several months older than I, knew to stand still; the bees were as scared of us as we were of them, and they would not attack if not provoked. I, young and stupid, had not learned that lesson. I writhed in panic as one bee made a literal beeline for my nose. Once I felt the beat of its wings on my face, I turned and ran, making a metaphorical beeline for the street, where I was promptly hit by a car. I broke six ribs that day. Bee stings suck, but they don't suck that much. I have, ever since, had an irrational panic associated with flying, stinging insects. I don't run into the street any more, but neither am I particularly good at feigning calm around them. Like nothing else, bees stir up in me the fight or flight response. Fear, I understand, is a natural, biochemical thing. Fear is what we experience when we are confronted with danger. Fear attends to every risky endeavor because that's what fear is supposed to do: to remind us of risk, to prepare us for danger. It's what we do with our fear that gets us into trouble. We fight, with the adrenaline-crazed passion of a mother bear or a wounded wolf. Or we take flight, our mind so set on the object of our fear that we fail to notice the other hazards in our path. It takes a lot of discipline to address our fear effectively, to fight fair or to fly in the right direction.

TWEET THIS: It takes a lot of discipline to address our fear effectively, to fight fair or to fly in the right direction. A measured response to our fear, in fact, may lead us to discover that we're fighting or fleeing the wrong thing—our spouse instead of our boss, perhaps, or the wee little bee rather than the two tons of steel barreling down the street. We may even realize that we've mistaken fear for something else: anxiety, worry, insecurity, bigotry. In the face of some fear, the best response may not be to fight or flee, but to listen, to question, to nonviolently resist, to confront, to repent, to love. We may find ourselves facing opponents or adversaries, but in most cases, our true enemy, our only enemy, the one who can cause us and those around us the most harm, is fear. We need to confront the fear before we address the thing we find ourselves fearing. We'll often see opportunity where we had formerly seen a threat - or, in the place of an enemy, a friend, or a neighbor, or a person created in the image of God - once we cast the fear out.
at February 22, 2016 No comments:

Everybody Knows Your Name: Two Recent Books on Shame 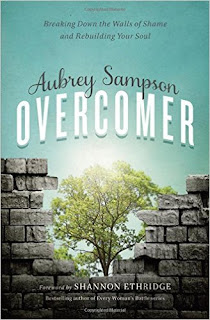 (When that book is explicitly directed toward women and you're a man, you get to thinking all over again.) In my defense, there's a reason I was sent The Soul of Shame by Curt Thompson and Overcomer: Breaking Down the Walls of Shame and Rebuilding Your Soul by Aubrey Sampson. As a book editor, I had made bids to publish both of them when they were still just proposals--each a gestating idea in the mind of the author. Aubrey's book went to a different publisher; I managed to sign a contract with Curt, but I went to a different publisher before he finished writing. So while I was familiar with both projects, each when finished was a new book to me, a printed and bound truth bomb right there on my doorstep.

As I read and reflected on both these books I kept thinking about a song by Mavis Staples, recorded with Jeff Tweedy of Wilco. If, as both Curt and Aubrey suggest, shame is countered by encounter - if we are best equipped to contend with shame when we understand it as a common enemy that has power over each of us but not over all of us - then "You're Not Alone" isn't just good news; it's gospel. When I was a kid we sang shame onto each other: "Shame, shame, everybody knows your name." But also, when I was a kid, the notion of everybody knowing our name was a source of encouragement - a universal desire that directed our steps. "Sometimes you want to go," the theme song to the TV show Cheers declared, "where everybody knows your name." (My friends Lance Ford and Brad Brisco reflect on that anthem in their forthcoming book Next Door As It Is in Heaven.) The cure for shame, it turns out, closely resembles the poison. We fear being found out, being known for what we've done, and what we've failed to do. But the gospel, alluded to by Mavis, celebrated by Curt and Aubrey (and Lance and Brad), is the good news that a God who knows us inside and out has taken all our shame upon himself, and has written our name in the book of life. We will never be forgotten; we will never be alone. We will know fully, even as we are fully known.
at February 08, 2016 1 comment:

The Cult of the Big C

You know what bugs me? "The big C church." I hear pastors and church leaders and culture leaders associated with Christianity say it all the time. And all the time, it drives me crazy. When these leaders refer to the "big C Church," they're referring not to their own, local gathering of Christians, but to the aggregation of every Christian gathering throughout the world, a head count of every Christian in the history of the world. It's a heady, heady concept. But then you look at the marquis at the entrance of their church building, and you look at the masthead of their church bulletin, and what do you see? A big C. It's appropriate to capitalize the C on a church's marquis or masthead, though. That's what you do with proper nouns—from institutional names to honorific titles. To lowercase the name of your church would be an act of shocking pretension. If you're not the first church of e. e. cummings or bell hooks baptist, then it would be silly to act like it. The flip side of the rules of capitalization is that you don't capitalize things that are functional, or conceptual, or generic, or of ambiguous relation. President Obama (honorific) is president (functional) of the United States. The church (generic) down the street is First Church of _________ (the institution).

TWEET THIS: The church (generic) down the street is First Church of _________ (the institution). I get why people refer to the "big C church." Sometimes you need to speak universally of not just the church in your midst but the "great cloud of witnesses" that the New Testament names as the church in the world. Sometimes you need to identify yourself with fellow Christians on the other side of the world. It's a good, well-meaning impulse.

TWEET THIS: When we capitalize church we emphasize the institutionality of it. But the nature of capitalization is to assign importance. When we capitalize "church" we emphasize the institutionality of it: We assert the "big C church" as something that everyone everywhere must take seriously, even show due deference to. It becomes equivalent in its meaning in the world to other such audacious entities: the United Nations (which is something more than a mere gathering of united nations), the Illuminati, the Mafia, Monsanto, that sort of thing. Such entities assert themselves into the world, flexing their muscles and declaring themselves as the world's great hope. The church, as the living and active presence of Christ in the world, loses some of its vitality when it is so institutionalized. We aren't meant to be set on a pedestal or a throne; we are meant to sink into the dirt of our context, like a seed, there to die in order to bring about new life.

TWEET THIS: We must decrease; only Christ must increase. I don't expect anyone is going to join me on this bandwagon. The greatest hurdle is probably because I don't have a clever monicker for what I mean to compete with the cutesy "big C church." Everybody knows what people mean when they say that. Maybe it's evidence that we talk too much about the church to begin with, when we ought to just get to it and do it. Maybe a hashtag would do it: #lowercaseus. We could make bumper stickers.
at February 01, 2016 1 comment: