History Involved Itself (It Came Upon a Midnight Clear)

For whatever reason, this song makes me think of Christmas. It's probably this line: "Or what it was . . . incarnation." I picture a shepherd on a hill at night, and suddenly angels and archangels heralding the birth of God . . .

When the revenant came down,
we couldn't imagine what it was.
In the spirit of three stars--the alien thing that took its form.
Then to Lebanon, oh God, the flashing at night,
the sirens grow and grow . . .

Mysterious shade that took its form,
Or what it was:

Three stars delivering signs and dusting from their eyes.

Finding a Path to True: My GoodReads Review of Jesus, My Father, the CIA, and Me

I was predisposed to think Jesus, My Father, the CIA, and Me by Ian Morgan Cron would be great. It was recommended to me by friends, coworkers, a vicar’s wife I met on retreat, even the editor who asked me to review it for Relevant Magazine's year-end best-of-2011 list. I picked up a humidity-soaked copy at the Wild Goose Festival in North Carolina in June, where the euphoria surrounding the book was palpable.

I normally resist such mania. Anything that gets that many people so quickly in a lather must be putting something in their drinks first. That may be why I put off reading the book for six months. But it turns out everyone was right. Cron's book is a good memoir that, in the final fifty pages, turns great.

Memoir is a tricky thing to write, trickier than it appears on the surface. You would think that anyone could do it; it seems like simply putting words to paper to tell the story of your life. Cron's memoir covers nearly half a century of life as he's known it, from his Irish Catholic childhood that splits time between Great Britain and New England, during which (no spoiler alert; it's in the book title) his dad works secretly for the CIA. His dad is also an alcoholic with diagnosed Narcissistic Personality Disorder that quickly caught up with his professional life and wreaked havoc on his home life. Plenty of grist for a sensational story, and to write a memoir based on it, given the zeitgeist, seems like a no-brainer.

Ah, but while anyone can write down their story, it takes talent to write a memoir, to tell an intensely personal story that not only compels the reader forward without losing his or her interest (the line between personal and arcane is as fine as it is unforgiving) but universalizes the themes so that the readers can find themselves, and something beyond themselves, in the telling. This is the feat that Cron accomplishes, moving generally effortlessly between the ethereal and the earthy, the sublime and the silly, all in service to the task of finding a path to true--a spiritual and emotional equilibrium that, for the person, approaches a reconciled self.

The book isn't perfect; Cron wears his fondness for (and debt to) writer and radio personality Jean Shepherd on his sleeve. Shepherd is a featured player in one of Cron's moments of epiphany, who was listening to Shepherd's radio program the night he told the story of a childhood friend whose tongue was frozen to a wintry flagpole. That scene was immortalized in Shepherd's short-story-turned-film A Christmas Story. It was Christmastime as I read Cron's book, and I had visited the house featured in the film A Christmas Story earlier in the year, so I may have been especially attuned to the writing style that Cron clearly emulates. But it's not a bad style to emulate, and besides, Cron's a good writer, so it's a generally pleasant homage.

One of the major themes of the book is the Eucharist, which figures prominently in Cron's childhood story and comes full circle when he, as an Episcopal priest, celebrates the mass at the end of the book. The Eucharist is a sacrament, a dispensation of grace, something that every memoir ought to aspire to, in my opinion, and something that Cron manages to achieve here. He mixes humor and sadness like bread and wine, yielding a conversion narrative that rings true in ways that only emerge from the commingling of suffering and faith, of the altar and the therapist's couch, of the body and blood of Christ. We join Cron in his search for a safe home, a caring father, redemption from a deeply scarred past, even though his story is entirely unique; it is in fact through his unique story that his readers are graced with a fundamental truth of the universe: love always stoops, and faith always jumps.

I get two kinds of mail at the end of the year: Christmas cards from friends and end-of-year appeals from nonprofits. The cleverer nonprofits make their end-of-year appeals look like holiday greetings, but we all know better: their fiscal year is coming to a close, and they're looking to end strong.

There are some year-end appeals, however, that I open as eagerly as I do the Christmas cards (and, if I'm being honest, more eagerly than I do some Christmas cards). These are the letters from friends who happen to work for nonprofits. Some of them raise the funds that pay their salaries, which is to say their housing, their health insurance, their kids' education, their retirement. Some of them raise a significant portion of (in some cases the entirety of) the budget for their organizations. Their letters are often not much different in form from the letters that come from more anonymous fundraisers--there are pictures of smiling or frowning kids, pie charts and bar graphs, underlined phrases and digitized signatures--but I know the people behind the letters, and I know that their hearts are in the letters because their hearts are in the work.

The end of the year isn't just Christmas and fiscal-year-end for nonprofits; it's also the end of the tax year. Many of us are staring down some nasty capital gains or unanticipated freelance income to report to the Internal Revenue Service in a matter of weeks; we are sometimes advised in such a situation to give some money away, to jack up our deductibles and offset our tax burden. Or something like that. I'm not typically in such a rosy financial scenario; I am, after all, the 99 percent. Many of you are as well, and you're developing nonprofit fatigue at the same rate as holiday shopping fatigue. I get that, believe me. But you may find yourself with a few extra shekels in your stocking come December 26--the second day of Christmas as well as St. Stephen's Day, for those who pay attention to such things. On that day some years ago, so it is said, good King Wenceslas looked out and saw a poor man gath'ring winter fuel. Wenceslas was sainted for his kindness to those in need, and the song dedicated to him reminds us that "he who now will bless the poor, shall yourselves find blessing." 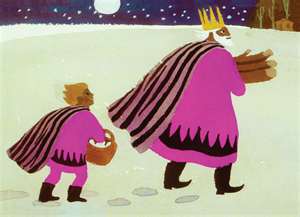 I write all this as much as anything to serve as a reminder to myself that, like my friends, there are people doing good and often unsung work behind those wearying year-end appeals in between all my Christmas cards--to remind myself that there may yet be some bucks left in the bank after the Christmas shopping is behind us, and those bucks could yet do some good. You may looking for such a reminder yourself. If that's the case, consider yourself reminded.

I've added a sidebar to Loud Time of "Organizations I Like." These are groups led and sustained by people I admire--many of them people I consider dear friends. If you're looking for some nonprofit to bless or to send you that blessed tax receipt this year, I happily commend them all to you. If you're a dear friend or person I admire whose nonprofit organization I've failed to like, feel free to hit me up, and I'll add it. If you have organizations you don't see in the sidebar you'd like to turn me on to, or if you'd like to add your thanks for the organizations you do see there, please comment freely. And in case I forget to say it later, have yourself a merry little Christmas.
at December 16, 2011 No comments:

I can't think of anything else to write about, so I'll write about this: my wife, because she loves me, bought me the She & Him Christmas album. It was the first thing I saw as I walked through the door after a three-day trip. I haven't listened to it yet, but I'm really looking forward to it. She & Him is a group made up of Zooey Deschanel and M. Ward--Zooey of Elf and New Girl fame; M. Ward the accomplished alt-folk singer-songwriter and one of the Monsters of Folk. The songs they record for She & Him are reminiscent of mid-fifties pop-chanteuse music; I saw them in Chicago for free with my in-laws at the Millennium Park amphitheater and quickly gobbled up both their releases, so yeah, I was eager to hear what they did on a Christmas album.

I get bored easily with Christmas music, to be honest. So much of recorded holiday music is opportunistic and pandering. You're more likely to hear harps and violins at the Wal-Mart in December than you are to hear them in heaven, and there's a reason for that. But when I find Christmas music that's different, that someone took on for the challenge of it rather than for the quick buck it churns out, I take notice. So I thought I'd offer a list of songs and albums that I've come to rely on during the holiday season. I welcome your feedback and supplements.

That's what I've got. What have you got?