Book Review: The Truth About You 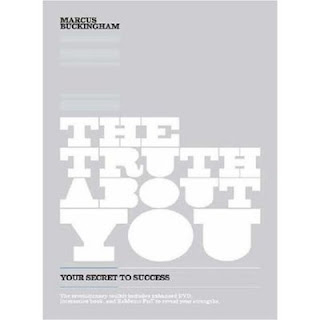 I'm surprised that a publisher like Thomas Nelson would publish a book that advises people to "break" the Golden Rule--Jesus' command to "do unto others as you would have them do unto you"--every day. But that's exactly what they did with Marcus Buckingham's The Truth About You. Buckingham offers this advice not as an act of rebellion per se but because, apparently, Jesus had some flawed logic.

This book had been sitting around the house for some time, waiting for me to work up the moxie to enter fully into it. It's like a Bible in that way, right down to the shiny lettering on the face and spine. It's also like a Bible in its dual promise of practicality and transformation: by taking it up you're not just reading a book, you're adopting a discipline, entering into a way of life.

The truth about you offers almost nothing to the desperately poor, and little more to the merely poor. That's fine; books are, arguably, the domain of the well-to-do. This book is for them--people born and raised in prosperity who are starting to chafe against the artificial restraints placed on them. As such it's pretty good, actually, except that its starting point is so secondary.

The truth about you necessarily includes the truth about the human condition, and the meaning of life, and so a book like this--which has the moxie to suggest it can tell you all you need to know to live your best life now, or whatever--really should begin with the question of why human beings exist, and why is there suffering?

To sprint past these questions to the really more mundane question of, essentially, "What do you most enjoy doing?" doesn't necessarily lead someone down the wrong path to their vocation, but neither does it necessarily generate real, deep reflection on life's purpose, regardless of how inspiring the soundtrack of the accompanying video or the typography of the pages. I think the author would agree that "no man is an island"--I get that from some of his rhetoric--but once you establish that no man is an island, digging a moat around your kingdom and casting away all the duties and responsibilities that don't enhance your self-concept makes precious little sense.

Buckingham's definition of "strengths" and "weaknesses" is a big departure from common understanding. "Strengths" are not what you do well but what you're "strengthened" by; likewise with weaknesses. So the solution to all the world's ills, we're led to believe, is to do whatever makes you happy as much of the time as possible. Tell that to the kid living in the garbage dump. I'm sure she has things that make her happy. Under Buckingham's program, that would be enough for everyone.
Email Post