David Letterman Can Do Wrong 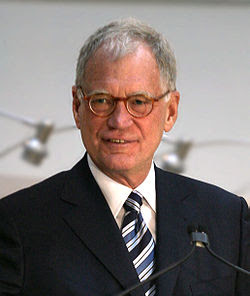 I like to think that if an anthropologist traveled from home to home in my extended family, she would readily observe the influence of David Letterman. My brother makes jokes like him. My uncle tells stories like him. We all repeat stories and jokes well past their shelf life. We are, by and large, Letterman people.

It's not surprising that Letterman would have that much influence on my family's sense of humor--or any family's sense of humor, for that matter. Whether you consider yourself a fan or not, Letterman has had almost unparalleled influence on American comedy culture. Giants of comedy readily acknowledge his influence. The Academy of Television Arts and Sciences regularly nominates and awards him Emmys for his work. He's closing in on the thirtieth anniversary of his first eponymous television program, a morning show that was eventually replaced by his late-night shows, putting him in front of millions of people five nights a week. And beyond his own show, he's produced critical and financial successes such as Everybody Loves Raymond. If you've noticed the gradual uptick of irony and absurdity in American humor since 1980, you have Letterman to thank--at least in part.

Beyond Letterman's influential approach to humor, over thirty years he's developed a particular rapport with his audience, both in audience and at home. Letterman's audience is for him, and he occasionally lays aside the veneer of showbiz to speak frankly and seriously with them. I remember his return to the air after the attacks of September 11, 2001, that took place just down the road from his studios; he better than anyone returned to comedy by first addressing the attacks in full seriousness and contagious defiance. He spoke frankly and seriously again last week when he announced that a person had been arrested for blackmailing him over his sexual affairs with women on staff at his show.

Now, admitting an affair is an entirely different enterprise from ushering in the return to normalcy after a historic, catastrophic event. The difference was plainly evident: Letterman's post-9/11 address was delivered before a silent audience; his confession this week was delivered to awkward spurts of applause and nervous laughter. The audience didn't know what was coming, and each detail sent them in a slightly different direction. The disturbing details of how Letterman's blackmailer approached him; the unfamiliar protocols for reporting and investigating extortion; the ultimate disclosure of the nature of Letterman's indiscretions. Audience members didn't know whether to laugh, clap or--could it be--boo?

David Letterman is a public figure. As such, the details of his private life, once made known, become public information. We prayed for Letterman during his bypass surgery and during his recovery. We celebrated with Letterman when his son was born and, earlier this year, when he married his longtime partner. How then, ought we to respond when we learn of his infidelity?

The issue is further complicated by the fact that David Letterman's job is to make us laugh. Every minute without a laugh is a production problem, and every production problem is Letterman's to solve. If infidelity is Letterman's private sin, dead air is his most pressing public failure. So even when he's disclosing something embarrassing and private, he's constrained by the relationship he's developed with us to give us jokes. And even when we should be lamenting Letterman's abuse of power and the distress he's brought to his family and company, we're counting the moments until our next opportunity to laugh.

David Letterman has done something regrettable, something he should grieve and we should lament. But we've been exposed as well: we are more prepared to consume humor than confront wrongdoing. Even when we should lament, we prefer to laugh.
Email Post