Bringin' On the Heartache

Today, without warning, I was thrust into a Def Leppard kick.

You may recall Def Leppard, a new-wave rock band out of England in the late 1970s who were ultimately tossed in with the hair-metal crowd in the 1980s, experienced a brief return to the top in the early 1990s, performed with Taylor Swift in the 2000s, and are still touring and recording today. This morning two friends had referenced their hit song "Armageddon It" in their Facebook status updates. Now I can't get them out of my head. I'm in the middle of March Music Madness at my other blog, Strangely Dim, with a post going live today about "What Do I Do?" by alt-folk artist Sam Phillips - who could not be more different from Def Leppard - so the best I can do to honor today's idea virus is to give the band equal time here at Loud Time.

Loud Time is a better forum, to be honest. "Loud" is a claim to fame for Def Leppard - at least from their earliest artistic exploits. Their song "Rock of Ages," their requisite ode to rock n roll, opens with ""Gunter glieben glauchen globen" and then launches into a cowbell-heavy anthem complete with slogans like "What do you want? I want rock n roll!" and "It's better to burn out than to fade away!" It's hard to be an early-adolescent suburban boy in the decade of greed, hear that song and not want to break something. As nerdy and mainstream as I turned out, that song and the rest of Pyromania - really the rest of any Def Leppard playlist - is nevertheless part of my musical DNA. 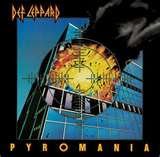 I remember sitting in a second- or third-grade classroom, bored out of my gourd, reading the graffiti scrawled on my desk. Two bands had left their marks, thanks to some similarly bored student who came and went before me: "Led Zeppelin" and "Def Leppard." You see the influence of the former on the latter immediately; it's not all they have in common either, since they are two of only five bands to have sold more than ten million copies of more than one album in the United States. (Any guesses at the other three?) At the time I was more of a Kenny Rogers fan, but the scrawl made an impression. If I wanted to be cool, I'd better get to know these bands.

My sister and I bought my brother the aforementioned Pyromania as a birthday gift or a Christmas gift (I'm not sure which), but instead of wrapping it, we hid it and made him find it. (It was in the piano bench.) I don't think he liked that game very much, and we went back to wrapping presents from that day to this.

Def Leppard was part of the soundtrack as my friends and I drove aimlessly around Des Moines in our late adolescence. They secured a spot in my musical memory that I never opened up to any other similar band: no Bon Jovi, no Scorpions, not even Led Zeppelin themselves were let in to the extent that Def Leppard was let in. I'm not sure what that says about me, let alone what it says about them. But I'm happy to own it as true; I'm not f-f-f-foolin'.

Mark Nielsen said…
Aw, you're not nerdy and mainstream... just an embedded freakazoid reporter/double-agent, gathering intel for the coming revolution. (I'll rendezvous with you at the usual place to pick up the latest dossier.)
To steal a line from music even older...
Let your freak flag fly!
9:16 AM

Has your computer lost its spell check function?
11:45 AM

David Zimmerman said…
That's how the cool kids spell it, old man. Look at my life--I'm a lot like you were!
8:18 AM