I have a new cause I'm fighting for: an end to male-pattern exhibitionism. This, it seems to me, is among the more pressing concerns of our day, ranking alongside the imminent end of America's global economic domination (after which we'll have to settle for being the world's only remaining military superpower), the questionable nature of muppets Bert and Ernie's relationship (the best word I've heard on this was thirdhand: "Everybody cares whether Bert and Ernie are gay; nobody cares that Oscar is homeless"), and the looming fall television lineup. I've seen the signs of it all summer: guys walking around shirtless, and everybody else accepting this as normal.

Friends, this must not stand. 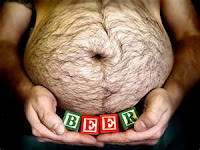 The tragedy of male-pattern exhibitionism is pervasive, reaching far beyond the gym. It's not just Ryan Gosling and the Situation who are showing off their abs, but men with beer guts the size of Delaware and backs as hairy as Snooky's extensions closet. I've seen toddlers and octogenarians wandering around shirtless; I've seen topless men on park benches and at outdoor concerts and, sigh, on the sidewalk outside my house. I'm honestly dreading our church's fall picnic because any number of my fellow congregants haven't gotten the message that WE DON'T NEED TO SEE THAT.

Frankly, I don't understand the appeal at all of walking around shirtless. It makes some sense at the beach or the pool, I suppose, but in the parking lot of a grocery store? In the audience at a tent lecture on social activism at a Christian music festival? Maybe I'm too self-conscious about my body, but there are reasons for me to be so. And trust me, there are reasons for you to be self-conscious about your body too, Mr. Navel-Gazer.

All physical quirkiness aside, there's a more troubling aspect of male-pattern exhibitionism, considering how widespread women's body-image issues are. Many women fret and anguish over their bodies. Men--at least a certain genome of men--seem to suffer no such self-consciousness. They flaunt their physical selves, while undoubtedly at least some of the women around them suffer self-loathing in their ill-fitting clothing. The men live free, letting it all hang out with wild abandon, daring the rest of us to look negatively or judgmentally on their physique.

There's something admirable about that, I suppose. I once read an article by a woman who noticed how much more assertive men were with their body posture on public transportation than women were--women sat tightly and took up as little space as possible, while men sprawled out and enveloped the space around them. So she started sitting like a man and felt immediately empowered by the experience. A liberated sense of body image is something we all ought to strive for; our bodies are temples, you might say, and to let others determine the value of our temple is to show disrespect for the One who lovingly crafted our temple in secret.

But the solution to the tyranny of body image isn't exhibitionism. Nudity never solved anything, did it? (Insert joke here.) By flaunting their physicality men assert a kind of cultural dominance over women, whether they think they do or not. "In a civilized society, clothing is mandatory for everyone, but less mandatory for men." The truly liberated man will recognize that his freedom is caught up in the freedom of others, so he will express his solidarity by remaining fully clothed, and instead rejecting the manifold small and large ways that our culture oppresses us all by defining beauty in severely limited ways.

But honestly, guys, mainly I just want you to put on a shirt. I want it so badly that I'm thisclose to praying for an early winter. Because honestly, guys, WE DON'T NEED TO SEE THAT.

Support the crusade against male-pattern exhibitionism! For a two-dollar donation I'll ship you a copy of The Parable of the Unexpected Guest. Click on the "buy now" button in the right sidebar under the book cover image.
Email Post

Anonymous said…
So, you don't want to see my belly. Well, young man, that belly you see is just the natural evolution from my six pack abs to a pony keg. Kinda raises questions of both cause and effect and evolution, don't it?

Talk about your uninvited guest! Who let this guy on the blog?
5:38 PM

David Zimmerman said…
Doesn't really raise questions to those of us who know you, Anonymous.
5:52 PM