I used to have this standing argument with a friend of mine. He always initiated it, probably because he's better at initiating arguments (I'm conflict-avoidant) and because he found my exasperation entertaining. The argument was, which is the true universal language: music or sports?

I know, right? It's a no-brainer. Music is a universal language. Sports is just people running around, occasionally knocking into stuff or one another or both. But not so fast: much to my dismay, he actually made a compelling argument. You find sports in all cultures, and sports always attracts a crowd. Whatever the manifestation, sports invites both participation and witness, and as transportable as it is (consider as only one example the "sports evangelism" groups that travel from America to foreign lands to beat the locals at basketball and then brain them with Bibles), it's also a cultural marker. Baseball is a "national pastime"; "football" is not merely football but soccer or American or Australian or some other domestic derivation. Sumo wrestling is known the world over, but it's known as inherently Japanese.

Not so fast, though, sporties. Music is likewise both universal and contextual. You can tell the geographical origins of a music even as you enjoy it from afar. You hear it everywhere you go, either ambiently or in some intentional broadcast. It's appended to the news and the weather and our driving and our working and in some cases even our sleeping. It almost by definition demands both a performer and an audience, and the lines between the two are easily and regularly blurred. I, for example, surely annoyed all the people around me as much as they annoyed me as we all sang along, as loudly as we could, with U2 or Paul McCartney or the various other artists I've seen perform this summer.

We'd go back and forth, my friend and I, in our ritual dance/sparring match. He would observe that thousands of people pile into stadiums every week to watch the same group of people run back and forth for a few hours. I would observe that all of them would be listening to marching bands and electric organs and AC/DC riffs while they did so. He would note that evening news programs had blocks of time dedicated to sports; I would counter by pointing out the music that played at the beginning and end (and sometimes the middle) of the block. I don't think I ever lost, at least by my estimation, because I could always close with the acknowledgment that you often saw trumpet players run across a football field, but you never saw football players run across a symphony stage.

Anyway, today I read a portion of A Cure for Gravity by Joe Jackson (the musician who performed "Is She Really Going Out with Him?" and "Breaking Us in Two" and countless other great new wave songs of the late twentieth century) in which Jackson argued that musicians and athletes "actually have a lot in common." I was scandalized, but he makes some good points. 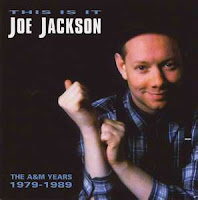 From a coldly rational point of view, what we [athletes and musicians] do is useless, unnecessary. Yet we pour years of dedication into it, training our bodies and minds, striving to transcend human limitations. We work in teams, we take solos, we go on tour. We're heroes and role models, and then again--as someone is always on hand to point out--we're just entertainers, and we should all be bloody well grateful if we can make a living doing something we like.

Well, that pretty much says it, I guess. Cue the music. (Ha! I win again!)
Email Post