Spoiler Alert: Publishing and The Artist

I saw The Artist this weekend, just in time for the Oscars. It really is a great movie; it's remarkable how much the actors are able to communicate nonverbally, and how secondary a role dialogue can actually play. But mostly what I took from The Artist is a question: What does this have to do with me?

I had the same reaction to Moneyball when I saw it on the plane, which may be an indication that I've become hopelessly self-absorbed. But I think mainly it's an indication of how much anxiety surrounds my industry--book publishing--right now; everybody's looking everywhere for hints at what the way forward might be. We are, to hear people tell it, fast approaching a time where books are not manufactured products but stored bits of data that are eventually either downloaded onto someone's system or printed on demand for the quaint and nostalgic. Meanwhile, and partly as a consequence, it's becoming dramatically simpler for anyone to publish a book, and there are less hurdles to sales success than there were in a more concrete, brick-mortar/paperback world. It seems, to the morose among us, that every publisher's anxious cry "What will become of me?" is met by its customers' cold response: "Frankly, I don't give a damn."

A similar futility faces the silent film actor George Valentin in The Artist. He's at the top of his game, an American treasure, when he bumps into a young, starry-eyed girl (Peppy Miller) looking to make her break in the business. They feel a spark but don't act on it; he's married and, while not particularly happy, he's noble and responsible. But he does her a couple of big favors and she's on her way to the top--just as "talkies" are about to make their break.

George is initially incredulous about the dawn of the nonsilent film, but in the best scene of the movie we see the fear of his own obsolescence come into stark relief. We see him pass through the stages of grief as the film progresses--through that initial denial, to anger at the industry that is so quickly and gleefully leaving him behind (including a sad moment when Peppy mocks him while he listens on), to bargaining with the American people to continue to trust him for their entertainment, to a prolonged and devastating depression, and finally to acceptance--a point that has its own sense of tragedy. Like any experience of grief, the path is not clean, and we see each stage reassert itself at various points. But it's a classic passage, one that many of us face in ways large and small. It's why the movie works so well despite not having spoken dialogue; it's why the movie feels fresh and progressive even as it uses a long-outdated form.

What's most interesting to me--and what I hope will be encouraging to my friends in my industry--is that The Artist adds a sixth stage to grief. Beyond acceptance comes, surprisingly even to George himself, a new wave of creativity. No sooner has the talkie killed the silent film star than the silent film star has innovated the talkie, revitalizing his industry before it even realized that innovation is necessarily part of its mission. 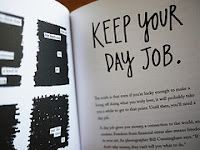 We are reminded in The Artist that there was no Cambrian explosion in cinema, before which all films were silent and fundamentally the same, and after which all films were talkies and fundamentally the same. Cinema, like all art--like publishing if we're smart about it--is never static but always growing, and major changes are never the final page of the story, only the turning of a chapter. The rise of the ebook, the democratization of the publishing process, the advances of on-demand printing are to publishing what talkies were to silent films: they are challenges, most definitely, but they are not terminal diseases, not death sentences. They are challenges to our creativity, and it would be a shame if we settled for mere acceptance.