Bat-Canon: Must Reads for the Wholly Perplexed

My mind continues to return to The Dark Knight Rises, which is, in my mind, a good thing. I imagine there are people of other opinions; I read, for example, a strong case against the myth of redemptive violence by Shane Claiborne that, while not referencing Batman stories, probably could have if Shane had wanted a few more hits. I know that violence begets violence and that peace should be our pursuit; still, I like a good Batman movie, and I'm not particularly embarrassed by it. I suspect that some folks are a little bewildered by the Batman mythology that makes up the trilogy of films. Assuming that to be the case, and assuming that people still have some energy for the subject matter, here are some good books, comics and graphic novels to help you enjoy the movies better.

First off, Understanding Comics by Scott McCloud. This has nothing to do with Batman, but everything to do with the primary medium through which Batman stories have been told. McCloud is a genius, and in this book he offers a McLuhanite understanding of comics as a medium, and all the possibilities that open up when we open ourselves to it. (If you're a little comic-timid, I'm sure this Ted Talk that I haven't watched is quite good.) Next, Batman Unmasked by Will Brooker. This cultural history of the Caped Crusader (in straight prose--the only non-comic in this list) brilliantly offers meaning and continuity between a Batman who is occasionally campy (as in the 1960s TV show) and occasionally rightly asked "Why so serious?"

OK, now on to the Batman comics. Two are obvious and bookend the crimefighter's career; they're also both written by the same person: Frank Miller, who does dystopia better than pretty much anyone. Batman: Year One is an origin story that emphasizes Bruce Wayne's early wrestling with the nature of crime and the ethics of punishment. It's here that Batman says "I'm no killer" and eschews guns, so all fisticuffs aside, Shane Claiborne ought to like it. Batman: The Dark Knight Returns is probably one of the two or three most influential comics ever written and the primary source material, I suspect, for Christopher Nolan's cinematic vision. It's set some years after Batman's retirement, and shows a world gone horribly bleak. In such a world, a humorless, anachronistic vigilante can actually inspire greatness. It's more violent than Year One, so Shane, don't say I didn't warn you. By the way, they're better read in reverse order; Dark Knight Returns was written first, and Year One is better read with it in mind.

Alan Moore's The Killing Joke is a particularly good and insightful look at the Joker and his relationship to Batman. I don't love the art, but as a story it's tragic and genius. Very disturbing, just so you know; probably a chief source for the second Batman film, featuring Heath Ledger as the Joker. For a helpful insight into Batman's complicated relationship with Ra's al Ghul (and family), check out Batman: Son of the Demon. It's been a while since I read it, but everything I know about Ra's I got from it--and that seemed to be enough. Finally (nothing on Bane, sorry), because I'm really into Neil Gaiman right now, you should read his piece "When Is a Door" in Secret Origins Special #1, an otherwise missable one-off comic. Like Brooker, Gaiman brilliantly connects the dots between the campy and the caustic in Batman's various mythologies; "When is a door" is a philosophical statement, a suggestion that our context shapes our ability to understand what is good and true, or something like that. 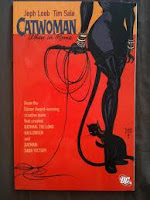 Honorable mention to Jeph Loeb's Catwoman: When in Rome, a short story following Selina Kyle on an intriguing caper. Batman: Year One gives us a similarly insightful look into the Catwoman, but I always liked this one. That's it. Happy Bat-reading!
Email Post