My friend Sarah Cunningham is running an experiment on her blog, encouraging people to show their appreciation to their friends. She's calling it the "Great Big Friendship Blog." Check it out; I think you'll like it. The experiment happened to coincide with a surprise celebration for a friend of mine, Keith, on the occasion of his fiftieth birthday. Several of his friends were asked to reflect on what he has meant to our lives. What follows are my comments. Thanks, Sarah, for the excuse to share them more broadly; thanks, Keith, for inspiring them in the first place. ~~~ I was trying to think about whether I would talk about Keith as a friend, or Keith as a leader. 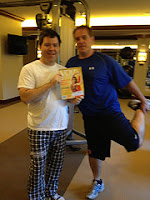 On the one hand, he’s been present to some of the most significant moments of my life. He was at, even in, my wedding. He and his family helped us move into our house. He came to my book signings. He and Angela were the first to visit us after my wife’s surgery this year. We’ve traveled together. We’ve even surfed together, and I’ve only surfed once in my whole life ever. So it’d be pretty easy to talk about Keith as a friend. But then again, he’s also been a significant leader in my life. When I first moved to the area, he was a youth pastor and I was one of his volunteers. When we later worked together in an organization he started, he was my boss. When I got married, he officiated at the wedding. When we’ve traveled together, it’s been mainly me helping him on projects he’s taken on for himself. And when I wasn’t helping him on those projects, he was pitching me other projects to work with him on. So it’d be pretty easy to talk about Keith as a leader. But then again, he hasn’t ceased to be my friend when he’s been my leader. And he hasn’t ceased to be a leader when he’s been my friend. Those two categories of relationship commingle with Keith—and not just with me. As I’ve observed over time, Keith offers friendship and leadership interchangeably to the people in his life. They’re a bonded pair for Keith, a mixed bag sometimes but always there together—friend and leader, leader and friend. So to call Keith my friend doesn’t seem respectful enough of the influence he’s been in my life. And to call him my leader seems to downplay the very personal role he’s played in my life. I need a different word, a third word. It doesn’t have to consolidate the two, like friendler or something stupid like that. It just needs to be distinctly Keithy. So I thought about it, and I settled on a word: Bro. Keith is the only person in my forty-two years of life who has regularly called me "Bro." I’ve never called him "Bro" back until now. It’s just not in my lexicon. Bro is an artifact of a culture I know only through Keith. It only shows up in my life when Keith is in the room. I know I’m not Keith’s only Bro, of course, because I’ve been at get-togethers at his house where people were throwing the word Bro around like it was a party trick. I have a friend who recently discovered that we both know Keith; he told me that he and a mutual friend occasionally recall a time when they both would see Keith regularly. They look at each other, get really quiet and serious for a moment, and just say one word to each other: “Bro.” But I like the word Bro for Keith, because presumably it’s the short form of the word brother, and I think the word brother is an apt description of Keith—not just for me, but for a lot of people. Keith shines the brightest, in my opinion, as a friend and a leader when he is faced with friends who have happened on hard times. I’ve watched him fly across country to be with someone who’s struggling. I’ve watched him agonize for long periods of time over how to care for people who are hurting, challenge people who are digging their own graves, restore people who have either been removed or removed themselves from significant relationships. I’ve watched Keith go through adversity with people, unsatisfied with the prospect of merely praying for them or merely being there for them in a latent, passive kind of way. Proverbs 17:17 says that a friend loves at all times, and a brother is born for a time of adversity. We live in a time when it’s easy to be a friend—you’re never more than a click away. And it’s easy to be a leader: you just declare yourself one and read a book or two. It’s even easy to love in a culture like ours, when we’re too busy for loving one another to mean anything material, anything more than emotionalism or sentimentality. But it’s still hard to be a brother, and it’s harder still to be a brother for a time of adversity. That’s what Keith is: a brother for a time of adversity, where his friendship and his leadership align most clearly and creatively. But brother is far too stodgy and formal a word for someone like Keith, so I’ll settle for Bro. Thanks, Bro, for your broship.
Email Post