Yesterday was voting day. It also happened to be the day I was scheduled to give blood. So just before I ate breakfast yesterday, I drove to my polling place and cast my vote; just after I ate lunch, I drove to Heartland Blood Center, where my phlebotomist tapped a vein in my left arm. I find myself wondering, which act had more lasting importance? 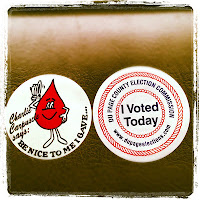 It was startlingly slow at the blood center; where usually many people would be cycling through over the lunch hour, yesterday there was only me. Meanwhile, at the polling place, I waited in a long line (nowhere near the hours-long lines in Virginia and Miami that Rachel Maddow would not shut up about, but for Du Page County, Illinois, a little lengthy). It struck me that some people's schedules seemed to have forced them to choose between voting and giving blood, and they chose voting. I put the question to my friends on Facebook, and here's how they responded: Matt: "I'd say it depends on who(m) you voted for. (I can never remember the who/whom rule.)" Stener: "Giving blood :-)" Mark: "depends on who you're asking! If you're currently in an operating room bleeding out, I think I know the answer :) But maybe the person elected will help end the completely unjustified denial of not letting me donate my perfectly clean O-negative universal donor blood because of outdated policies, so maybe your vote will help result in MORE blood donations!" Justin: "The latter [giving blood] without a doubt..." Marshall: "Vote. Thousands have already given their blood for our right to vote." Sue: "voting. You can give blood any time (unless you've given in the past 8 weeks or have been pregnant or had surgery or are a man who's had sexual contact with another man or been around someone with the TB virus or have babesiosis or chagas disease)." Christopher: "if Heartland is still giving a quart of Oberweis for a pint of blood, one will have a greater ROI than the other" Juanita: "One will have individual impact, one will have systemic impact. both matter." Al: "Are you just collecting stickers today?" Dani: "You are über responsible." Sean: "I can't do either in the US. so do both!" Julie: "Why the need for a hierarchy?" So it was actually a split decision: Three for voting, three for giving blood, and thre for both. Julie is right, of course; it was no skin off my nose to vote and give blood in the same day. I'm sure it was for some people, but it wasn't for me. For myself, I think voting is in principle more important, since it's a right and civic responsibility that can only be exercised on specific days, whereas you can give blood every twelve weeks or so. But I also think there are principled reasons for not voting, but the principled reasons for not giving blood are pretty few and thin. (My friend Joel offered his rationale for giving blood here.) This year's election didn't quite rise to the level of nonparticipation for me, but it came close, and in fact I did decline to vote in one race on my ballot because both candidates were onerous to me. And I know that some friends of mine saw the choice between, for example, an anti-government/pro-multinational-corporate conservative and a liberal who sends robots into sovereign nations to kill people, as no choice worth making. But ultimately I'm kind of glad that it worked out for me to vote and give blood on the same day. Most days of most weeks I'm going through a very predictable routine; shaping the direction my government takes for the next four years over breakfast and potentially saving a life or two with my precious bodily fluids over lunch gave yesterday a particular punch. Anyway, polls have not yet closed on this split decision; your vote could tip the scales. Which is more important: voting or giving blood?
at November 07, 2012

Sue missed one. You also cannot give blood if you lived in the UK or various other countries. Meaning I can't. In case I have mad cow disease.

So I voted. It was upsetting. I literally didn't know who I was going to vote for until I filled in the little circle, and then I felt sick for about five minutes afterwards. I don't feel so good about the results, either, just because they prove such division.