An Anchor of Time: The Letter from Birmingham Jail, 50 Years Later

Everybody wants to be on Martin Luther King's side, but no one wants to cross the street.

Back in college one of my professors suggested that, while it was appropriate to date time from the birth of Christ, given the historical and cultural significance of that moment, the time had come to mark time differently. He proposed August 6, 1945, the day on which the U.S. government dropped a bomb on Hiroshima, Japan, and ushered in the nuclear age. That day changed history, he argued, and he was right. But the interesting thing to me about how we mark time now--according to the birth of Christ--is how unremarkable that day was to the people who were living it. It's only through the lens of history that we came to recognize its significance, only in retrospect that we know how profoundly that day changed history. So, if my professor is right and the time has come to re-mark time, I think we ought to look for something more subtle than a nuclear explosion. I might propose April 16, 1963. April 16, 1963, is the day Martin Luther King Jr. began writing his letter to white clergy, on the occasion of his arrest and imprisonment in Birmingham, Alabama, for "parading without a permit" in an effort to end legal segregation in that city. He wrote in response to an editorial, written by various white clergy, offering general support for the cause of the black person in the American South but urging patience and meekness. Today is the fiftieth anniversary of the writing of that letter, and it is as current today as it was then. 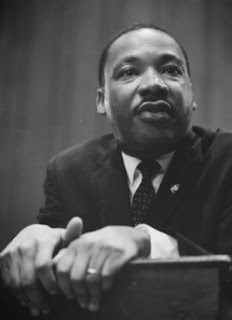 Oh, the details of the story may be slightly different, but both in the specifics (the systemic injustices that keep people of different ethnicities separate and unequal) and in the generalities (the long arc of history that still leads to but has yet to arrive at justice), King's letter is profound and prophetic. You don't know in a moment how significant a piece of writing will be. Even a bestseller can't be judged at the point of sale. Only time tells the real value of a good word. And time has been very good to King's Letter from Birmingham Jail. It is eminently quotable but merits thorough reading and reflection. It has been the impetus for any number of short-term and lifelong works of reconciliation and justice. It has shored up the courage of people fighting good fights; it has comforted the afflicted and afflicted the comfortable. To those who seethe under a general situation of injustice or who crave revenge over specific acts of hate and violence--as I suspect many are feeling today--King's letter points to "the more excellent way of love and nonviolent protest." For those who think the law is the law is the law, King points out that "everything Adolf Hitler did in Germany was 'legal' and . . . it was 'illegal' to aid and comfort a Jew in Hitler's Germany." To those who think that the best life is the avoidance of extremism and the preservation of peace at all costs, King replies that "on Calvary's hill three men were crucified . . . for the same crime--the crime of extremism. Two were extremists for immorality, and thus fell below their environment. The other, Jesus Christ, was an extremist for love, truth and goodness, and thereby rose above his environment. Perhaps the South, the nation and the world are in dire need of creative extremists." "So the question," King asks for all time, "is not whether we will be extremists, but what kind of extremists we will be." This question, grounded in history as it is, will haunt us far into the future. It is transcendent, the way all good anchors of time should be. As we return to it, we make inevitable progress on the long arc of history toward justice. As King declares in his letter:

Human progress never rolls in on wheels of inevitability; it comes through the tireless efforts of men willing to be co workers with God, and without this hard work, time itself becomes an ally of the forces of social stagnation. We must use time creatively, in the knowledge that the time is always ripe to do right.

For the full text of the letter (which I read once a year, every year--a practice I recommend wholeheartedly), click here.