I had the privilege, some time ago, of editing Jamie Arpin-Ricci's book The Cost of Community. I had been introduced to Jamie by my friend Adrianna Wright, and we had the opportunity to travel to Haiti together on a learning mission hosted by Haiti Partners and funded by InterVarsity Press, which had recently published another great book, Following Jesus Through the Eye of a Needle, by another good friend, Kent Annan. Publishing is not always so friendly, so familiar, but when it is, it's particularly rewarding. Jamie has remained a friend (at a distance, as he lives in community in Manitoba and doesn't venture out much), and so I was honored to be invited to review his latest book, Vulnerable Faith, this time published by Paraclete Press. Jamie gets right to it in this book, challenging a common but distressing element of contemporary Christian faith: "cheap faithfulness."

Cheap faithfulness is taking the name of Christ as our identity without requiring the renunciation of self and selfish ends. It is seeking full intimacy with God yet giving little, if any, commitment. It is about negotiating terms with Jesus, as though we have anything at all to bring to the table. It is an abuse of love no better than trying to achieve the pleasures of intimacy by using another person for cheap sex. (Vulnerable Faith, p. 22) 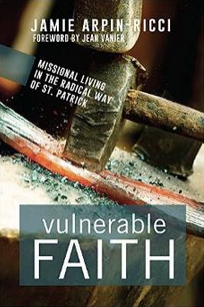 Cheap faithfulness is only one manifestation of a larger crisis in the human condition, one that causes us to lean toward cheapness in all our relationships and away from the more risky, but more rewarding, relationships with God and others characterized by vulnerability and authenticity. Vulnerable Faith is, essentially, a conversation about the nature of truth and our essential distance from it at all times, thanks to our regrettable finiteness. A fear of death inspires in us a sense of self-preservation that puts us at odds with one another, at odds with God. The best we can hope for, as this sense of self-preservation lives in us, is what Scott Peck calls "pseudo-community," a kind of conspiracy of pretense underlying all our relationships, and ultimately a self-deception that renders us other even from ourselves. Jamie demonstrates this problem by looking at the life of none other than St. Patrick, the manliest of saints.

If you would put half as much effort into being who you could truly become, rather than trying to be who you think everyone else wants you to be, you could become a man people would follow. (Calpurnius, father of St. Patrick, to his son, aged sixteen, p. 36)

So few of us are our true selves; perhaps this is why so few of us are saints. To be a saint is to be other than what we are, in our striving, self-protection and self-deception. But in another sense, to be a saint is to be finally what we were created to be, what we are underneath our own fortresses of artifice and pretense. We have lost sight of ourselves; Only God can understand us now. Only God can save us. And how he saves us? We're not going to like it. "The cross is an instrument of death" (pp. 29-30). Taking up the cross of Christ involves the emptying of our lives of all pretense to be replaced with the Truth. The embrace of truth is not a conceptual, intellectual thing, but an embrace of Jesus who is the truth and who gives his life for us and calls us into a daily martyrdom from which we are resurrected as better, humbler, more compassionate, saintlier versions of ourselves. Jamie calls this the "martyrological" life. "Because Jesus embraced this emptiness and because it glorifies God," Jamie assures us, "it is not a punitive emptying, but a meaningful and hopeful one, promising that something far greater will fill us" (p. 93): vulnerability, authenticity, humility, born of the grace and truth of Christ. In this respect, the cross is not just an event - the salvific work of Jesus - it is also an ethic. We often think of dying to ourselves as living self-sacrificially, and that's a part of it. But as Jamie explores in this book, dying to ourselves is also more existential than that, more fundamental than that. After all, we can live self-sacrificially and still be incredibly pretentious, even violently judgmental. But dying to ourselves? This is the type of martyrological life uncovered in, of all things, the recovery movement. We die to ourselves by admitting our incapacity to kill it at life. We acknowledge the thing we love, cling to, the thing that is slowly killing us but that we have entrusted our security to. Alcohol, food, gambling, sex, sin, whatever, these are presenting problems of an underlying issue: our fear of our own mortality, our own vulnerability. We are on an undiverting path toward death and we can't handle it. We are contributing to our own demise and it's freaking us out. By the grace of God we are delivered of this fear of death (as if we are ever delivered from the fear of death without first going through it), emptied of our pretensions and self-deceptions (as though we are ever rendered invulnerable to such things). On the far side of the cross we are no longer diverted from the mission of God, which has as its goal a world rightly ordered under the sovereignty of a good God of love, with all of creation demonstrating loving mutuality without pretense or self-protection. The poor among us are no longer "the poor" but brothers and sisters who need our help; the struggling among us are no longer objects of our impatient pity but those we struggle with. While most of Jamie's book is personalized, it is never individualized: indeed, he demonstrates very effectively that reconciliation between people is prior to reconciliation with God, according to the gospel of the Bible. This isn't works-righteousness; it's the nature of our healing. Jamie tells the story of a husband who was confronted for flirting with another woman; his wife's cross to bear was neither to silently endure this indignity nor to cut ties and forge a new life - either of which is commonly prescribed in our highly transactional, hyper-individualized age. Her cross to bear was to leave her husband for a time, to endure the embarrassment and complication of separation, and to pray for her husband to die to himself. And she and her husband, though separated from each other, were accompanied in their cross-bearing by their supportive community. This was a communal challenge, and though in this instance it ended tragically, it still demonstrates the fundamentally plural nature of the Christian life. "The relationship," Jamie observes, borrowing from the sponsor relationship in Alcoholics Anonymous, "is not about positional authority but dynamic mutuality." To be Christian is, above all, to not be alone: we are led by a God who promises to never leave us or forsake us, but we are also bound to one another by our crosses. Jamie's portrait of Patrick and his transformation, from spoiled child of privilege to patron saint of Ireland, is insightful and arresting. Not only is Patrick's story dramatic enough to bear telling, it's also existentially significant: there is more to his story than the facts--the people, the place, the things. Patrick is a saint, but he is also us. And this is both bad news and good: We are as vulnerable as was young Patrick, but we are also as capable of great things as he, as available to transformation as he. We are us, but we are also, somewhere in the DNA of us, saints.
Email Post

We have painted God with the brush of our ignorance. God is a little old man up in the sky, way up there somewhere.
That might have been okay, a story even 200 years ago, but it is not today.
Organised Religion - the lucrative industrial empire, churning out deciples accordingly.
Amen

What do we then do with quantum physics ?
The scientific community holds that the universe never forgets. That everything has memory & not only memory but also intellectual capacity.
That is how everything stays together & does not fly all over the place.
Therefore nothing can become extince - when we hear that a species of eg., musk rats, that have been extince for 30 years have just been found - just a few of them mind, do we realise that the universe may have just spat them out of nowhere ?
Instant like....so as to maintain equalibriam / to restore balance.
A miracle or quantum physics ?
Or are they the same thing ?
If we believe that God created all things, then we cannot exclude God from this equation. It's His handy work.
Primative is not the way to go anymore.
Xmas Mass at the vatican on TV. A magnificent splendor, as an offering to God for his generous grace.
Outside there is someone forraging in a rubbish bin for food, all this in the sight of God.
Somehow I don't think that that is what God had in mind, that we have got it horribly wrong.
Welfare is Satans work only.
Seeking God & the truth - would that be something worthy enough to bring to the table of Christ ?
Even when it defys the maunstream pomp & ceremony ?

Anonymous said…
Feeding the multitudes:
The Second Miracle - th efeeding of 5.000 with 5 barley loaves & 2 small fishes.
Hypnosis:
Mesmorism:
ESR: reception of information sensed with the mind.
Placebo Effect: the phenomenon in which some people experience some type of benefit from a - fake treatment.
Transceiver: in radio terminology, a transceiver means a unit which contains both a receiver & a transmitter.
The RF Transceiver uses RF modules for high speed data transmission.
Telephony: we have mobil phones today & "hey ma, look, no hands or wires".
Electromagnetic theories of consciousness propose that consciousness can be understood as an electromagnetic phenomenon.

Is it possible that Jesus Christ was a more advanced human being that your average man.
Is it possible that a transceiver type situation occcurred & everone believed that they had eaten = placebo.
YES INDEED.
The Lord works in mysterious ways.
Blessed be the name of the Lord.
And it is up to us to get some learning so as to know & understand God & his universe.

Honour thy father & thy mother - father & mother is everyrthing that has brought me to this existence - from the begining og time - even to the minutest particles that we don't know exist yet - respect all thing & tred with caution for the universe is a tricky place.

Anonymous said…
I never believed He couldn't do it.
i went looking to see how He did it.
11:47 PM

Anonymous said…
SORRY !
I forgot to say
CROWD PSYCHOLOGY:
IT ONLY TAKES 7% OF A CROWD
TO SWAY THE REST OF THE PEOPLE
Adolf Hitler was not a successful/mesmorising speaker full of charism - they had hecklers in the crowd going rah, rah, rah, & everyone just followed.
SO HERE IS JESUS
HAVING CONVINCED 7% OF THE CROWD THAT THEY HAD EATEN TO THE FULL & PRETTY SOON THEY ALL FELT THE SAME WAY.
STAY COOL GUY.