Stitched into Every Ending: A Guest Post from Steve Wiens, Author of Beginnings

I have had the great pleasure of editing a great number of great books. The most recent to be numbered among them is Beginnings: The First Seven Days of the Rest of Your Life, by Steve Wiens. I wanted to edit this book - I wanted to real bad. I wanted to so bad that I changed jobs and moved a whole time zone away from my home of twenty-two years to do so. Not really. I mean, it's a great book and all, but come on. But seriously, Steve's book was on the table when I started feeling the urge to take a new leap into a new void, to leave a job I'd enjoyed for nearly two decades and relocate from a place my wife had never not called home. I had gotten a taste of Beginnings as a proposal at my Illinois job, but I learned that Steve had signed with NavPress, a publisher in Colorado that happened to be in need of an editor. The fact that Steve's book was here, waiting for me, was reassuring: There are good books to be edited, good authors to befriend, even up in the high hills of Colorado. We would be moving, of course, and we would be leaving many significant relationships and sacred ties behind. We would be entering into an ending. But as Steve notes below, stitched into every ending is a beginning. And hovering over every beginning is the Spirit of the Living God, making flesh with a word and new life with a breath.

TWEET THIS: Stitched into every ending is a beginning. And hovering over every beginning is the Spirit of the Living God. Here's Steve, reflecting on the genesis of his book about Genesis. Keep reading for a taste of the book itself. Trust me: It's delicious. *** 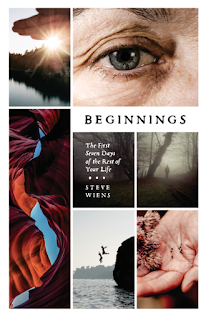 I suppose it might be considered a cliché to say that my first book discovered me; that it fluttered down to me in a bright burst of color and flame, beckoning and irresistible. But it did. It came to me as a question, but one with a smirk and a wink. It was a delicious question, the kind that invites you to leave Bag End with only a walking stick and a stomach hungry for adventure. I was stuck, but I was only beginning to realize it, and it was a sickening kind of feeling when I finally did. My life seemed to be drifting away from me, like someone was using a pair of bellows all wrong, extracting breath from me instead of adding it. The question thundered around me, accompanied by random flashes of lightning, and I was dazzled enough to turn aside to see what it was before it rolled by. What if the creative act of God described so richly in the Genesis poem was not simply an event in time, but a process that is reflected in all beginnings that follow? What if new beginnings were lurking around every corner, inside every whisper, and even stitched into every ending? What if they hovered above us, and filled in the fault lines beneath us? What if being stuck wasn’t the inevitable destination? What if the world, right here and now, is crying out once again, and what if the God who hears is responding, and sending, and moving, and acting? So I wrote and wrote and wrote, and with three boys under the age of six, it was mostly done by magic tricks and stopping time. The more I wrote, the more I believed. It came in torrents, flooding me, until it didn’t. Then it trickled in: a paragraph, a sentence, a word. But it came all the way out, and I’m about to let it go into the world. Beginnings is my manifesto of hope, that the creative activity of God is not finished, not even close. Beginnings is my defiant shout that even when we are lost in the inky blackness, there can emerge out of that swampland something glorious, something eternal, something covered in the goodness of God.

TWEET THIS: The creative activity of God is not finished, not even close. Steve Wiens What follows are the first words I used to translate the fluttering reality in which I now am grounded. I hope it leaves you hungry for more.

THE ACHE HAD probably been creeping up on me, but I didn’t notice it until that night, sitting on the deck behind my suburban house looking out onto my suburban life. Isaac was two, and the twins were six months old. I was a pastor at a large church, I had been married for fourteen years, and my twenty-year high school reunion had come and gone. I didn’t go to that reunion. I didn’t have the energy for the awkwardness, the sizing up, and the plastic cups of stale beer to chase down our stale memories. But the ache that had been whispering through my body rattled to a clumsy stop on that night, in those suburbs, on that deck. I had been looking at pictures of my friends who went to the reunion: my old girlfriend, the guys I used to go all night skiing with on those blisteringly cold nights in Minnesota, my soccer team. And I remembered all the beginnings. I remembered moving from Southern California to Belgium the summer before seventh grade. I remembered the sour, un-American body odor of the team of men who moved our old furniture into our new house. That smell was the baptism of our new life in Europe. I remembered my friend Colin who lived across the street in a two-story white brick house in Waterloo with black shutters, like they all were. I remembered the in-ground trampoline in his back yard, on which we spent hours and hours, jumping our way into adolescence. I remembered his mother’s unbearably loud voice, as it boomed around their house like a grenade and made us run for cover. I remembered falling treacherously in love with Tammi the moment I saw her, coming down those stairs in the fall of my ninth grade year. She liked me back, and then she didn’t like me. I was devastated. That’s when I started listening to the Cure and Depeche Mode, bands who were created for teenagers like me who don’t know how to express the frightening chaos brewing beneath our skin, bubbling and boiling. I remembered Mr. Tobin, my tenth grade English teacher. Every student should have a Mr. Tobin. He got to know each of us and selected books based on what he thought we’d like. The first book he gave me was Trinity, by Leon Uris. I remember staying up late into the night reading about Conor Larkin, the main character, who was everything I wanted to be but feared I wasn’t: brave and passionate and rough edged. Almost thirty years have passed since I met Mr. Tobin, and I credit my deep love for reading to his deep love for teaching. I remembered kissing Angie under a starry summer night on that dock that jutted out into Lake Como, the thrill of that moment reflecting off the lake and making everything luminous that summer before our senior year. I can still see the picture of us at the homecoming game: she was beautiful, holding my hand under the dark October sky. I had a ridiculous acid-washed denim jacket on, with only the bottom button fastened in the chilly air. There was a grin on my face and my eyes were sparkling. I was seventeen. I remembered driving around in Matt’s Bronco for hours, finishing off the beer that Carl’s older brother bought us. We must have burned hundreds of gallons of gas on those cold winter nights; we were irresponsible, irrepressible and immortal. I remembered deciding to go to college in a sleepy little town in southern Minnesota, instead of up north, where most of my closest friends from high school had chosen to go. I remembered trying to explain it to them, in the awkward way that high school guys do. I don’t remember much of that summer before college. I only remember the familiar sensation that comes with every new beginning: the thrill of reinventing yourself running parallel with the fear of the unknown—the twin tracks that lead to everything else. But on that night, on that deck, in those suburbs, the continual forward movement seemed to have stopped. The tracks had run out. I used to be in motion, rattling forward toward a destination that kept morphing. But on that stationary deck, I had become solid and stable, and stuck. There would be no new beginnings. My life should have felt full and rich, but instead it felt empty and dark. There was only the slow work of playing out the reality of the decisions that had already come and gone. I was a pastor. I was a father. I was a husband. I didn’t regret any of those things. I loved my kids and my wife and my job. But the finality of it all was a relentless crashing—wave after wave, under those stars, in those suburbs, on that night. It felt vacant, like staring into nothingness. It was empty and full at the same time. Empty of beginnings, full of endings. As I sat there motionless with the emptiness closing in around me, there was something else hovering above me in the darkness, but I couldn’t see it. If I could have seen it, it would have looked like a beginning.”

* * * Steve Wiens lives near Minneapolis, Minnesota, with his wife Mary and their three young boys. Steve blogs publishes a weekly podcast called This Good Word. You can order his book Beginnings here: Amazon | Books-A-Million | IndieBound | Barnes and Noble. You know you want it.
Email Post