There's a conspiracy afoot, people. It extends to the highest offices in the world: the British government, the Archbishop of Canterbury, the Pope, the Orthodox primates—"and," undoubtedly, in the words of the great film So I Married an Axe Murderer, "Colonel Sanders before he went teats up." The conspiracy is to set a permanent, fixed date for Easter. We simply can't let that happen. "For one and a half millennia," writes Nick Miller of the Sydney Morning Herald, "for Anglicans and Catholics, Easter Sunday has been the first Sunday after the first full moon following the spring equinox – a convoluted formula which means the date can vary by more than a month from year to year." This is the problem as leaders of Catholic, Anglican, and Orthodox churches see it: Easter is too wild, too unpredictable. You have to work too hard to let people know it's happening. Schools have to excuse too many unscheduled absences. Stores have to concoct too many algorithms to schedule their sales. Such chaos is beneath a society as well-heeled and commercialized as ours. Thus say our religious authorities and corporate overlords. I imagine some cabal of evangelicalati is giving their nod to it as well: Rick Warren, John Piper, and whoever else everyone seems to think speaks for me. But I'd like to nip this thing in the bud. It's a good thing that Easter is hard to schedule. We are blessed by the confounding of our calendars represented in Easter. It makes us harder to subjugate. It provides the last line of resistance against the commercializing forces of modern materialism. Keeping Easter a moveable feast keeps Christians on our toes. It keeps Christianity untamed. 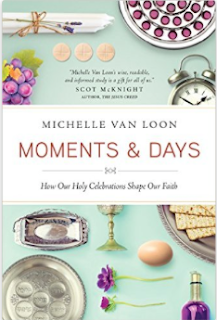 As I learned from Michelle Van Loon, whose book explores the Jewish feasts and Christian calendar and will release this fall (just in time for Advent!), the lunar calendar informs the Jewish feasts, and those feasts inform the Christian holy days that followed them. Easter is tagged to Passover because Jesus was commemorating Passover when he was arrested, and Passover is celebrated in accordance with the cycles of the moon. The birth of the church takes place on Pentecost, a Jewish feast that is similarly rooted in the agricultural year, tied as it is to the lunar calendar. These celebrations were born in a time when empires had yet to colonize time itself: that would come a few centuries later, when holy Roman emperors deemed it expeditious to bind time to the sun rather than the moon, the better to systematize their empires with. Holidays tied to the lunar calendar are more organic than those tied to the solar year. They remind us that calendars are social constructs. They force us to pause and think about when, and why, we celebrate and commemorate. They reassert that there are rhythms more natural than the ones we have acquiesced to, that our sacred celebrations transcend communal or corporate convenience. Our holidays should be weird because, as the apostle Peter tells us, we are a "peculiar people" (1 Peter 2:9, KJV)

TWEET THIS: Our holidays should be weird because, as the apostle Peter tells us, we are a peculiar people. I'm not calling for anything radical here. I'm not saying we should dress funny for Easter (although, frankly, some of you do). I'm not demanding that Christmas be untethered from December 25 (although has celebrating Christmas every December 25 really helped keep Christ in Christmas?) any more than I'm demanding that civil holidays like Independence Day no longer be fixed to particular days, like July 4. (I think if you're going to blow up a bunch of stuff one day every year, you should keep it as predictable as possible.) I'm simply suggesting we leave well enough alone, that we keep Easter weird. It's one of the cooler things about us, I think.