Middling 2.2: Whenever Possible, I Go Vinyl

Have you heard about the woman whose full name includes the command prefixes of two AI devices on the market? Alexa Seary says her life has become “a waking nightmare” since Apple and later Amazon introduced their virtual assistants. At least now, I suppose, her friends are ordering her around using her first name instead of her last name. Ha ha very funny. We opened our home to artificial intelligence this year when Kara’s sister gave us two Amazon Echo Dots. So far we use them mostly for weather reports, sci-fi humor (“Tea. Earl grey. Hot.” Ha ha very funny), and music. Here’s the problem: Your virtual assistant is more loyal to her corporate creator than to you. So Alexa will not link to our iTunes account; she will only access our Amazon account. That means I can listen to all the music I’ve bought Kara’s mom through Amazon, but none of the music I've bought for myself through iTunes. (Not to mention none of the music Kara's mom has bought for me. And she and I . . . well, we have different musical tastes.) That’s okay, because I am still, by and large, stubborn about owning music in physical form. Whenever possible, I go vinyl. So for Christmas I also got two brand new records: If All I Was Was Black by the great Mavis Staples, and Fifteen by the Wailin’ Jennys. 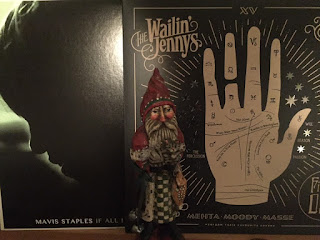 Let me quickly say that even a “bad” Mavis Staples album still prominently features Mavis Staples: earnest, soulful, wise, fully committed. I read an interview with her years ago where she revealed that Bob Dylan had wanted to marry her. She told him he needed to get right with God first. I like that and I like Mavis. In recent years she’s collaborated with Chicago legend and Wilco front man Jeff Tweedy, which in theory should work: Both are great artists who don’t do anything halfway. But I found this album a little too quaint. I wonder if Tweedy is star struck: I know that I get a little deferential when I’m editing a legend. I wonder if Mavis exists in his imagination more as an icon than a person. I wonder if she’s just getting tired after nearly seventy years of singing and nearly eighty years of fighting the good fight. Or maybe they’ve gone as far as they can go together. Whatever the case may be, in the end it’s still an American treasure singing, so maybe it will grow on me. Tracks of note include “Little Bit” and “Try Harder.” But also check out her collaborations with Arcade Fire: “I Give You Power” and the Talking Heads track “Slippery People.” Powerful and prophetic—classic Mavis. The Wailin’ Jennys is, I suppose, technically a “super group.” Three women, each doing just fine as a solo act, decided to get together. Their voices are heavenly together. They broke up a while ago but reunited for their fifteenth anniversary, with a new album of favorite covers and a tour to support it. They actually came to Colorado Springs while I was out of town. Sigh. Fifteen came out the year Tom Petty died, so a cover of his “Wildflowers” was perhaps inevitable. But it’s amazing. I could listen to it over and over and over. Also of note is the cover of “The Valley” by K. D. Lang, a song I’d heard but never really noticed, a sad and knowing piece with a hopeful chorus. That and “Keep Me in Your Heart,” which Warren Zevon wrote from his death bed, are now shortlisted for my own funeral playlist. I also, kind of as a joke, got the new Taylor Swift CD, Reputation, for Christmas. It’s pretty good, although whoever started the “Old Taylor is dead” thing (spoiler alert: it was Taylor herself) needs to take a second pass. 1989 was her Great Leap Forward; this is just her natural next step. *** This post is excerpted from the Spring 2018 issue of Middling, an occasional e-newsletter I send out, focused on music, books, and life in middle age. Let me know if you'd like to get it. Postscript: The Mavis Staples album has indeed grown on me. You should get it.
Email Post