I was so pumped to watch the Grammies that I just plopped down and did it--twenty-two hours after the fact. That's the reality we live in, a reality in which live broadcasting can, through the technological marvel known as "digital video recording," still be asynchronous communication.

I learned the term "asynchronous communication" from Lynne Baab, whose book Friending is inching toward publication as we speak. Of course, we're not really "speaking"; I'm typing, alone in my family room, and you're wherever you are, however many hours or days or even years after I post this, reading my thoughts in my absence. That's what's meant by "asynchronous," as opposed to "synchronous communication" such as phone or face-to-face conversations, or instant messaging.

More and more communication falls somewhere in between synchronous and asynchronous these days, thanks mostly to the advent of social media. E-mailing, texting, tweeting and status updating all straddle the categories: e-mail is faster than snail-mail, and so carries for the sender some expectation of immediacy, and yet it sits in an in-box to be opened at the discretion of the receiver. I e-mailed an author last Friday, and on Monday I was panicked that she hadn't responded yet. Meanwhile, I have several unopened e-mails that are days upon days old. It's the same with texts and tweets and status updates: we send these communiques out of an immediate, sometimes even urgent, impulse; they're then received and digested and responded to at the leisure of their recipients.

This fact struck me midway through my status blitz as I was watching the Grammies. Recorded from the previous night, they were old news by the time I turned them on. But they were so fun to watch that I felt compelled to share. Interestingly enough, I didn't start posting till the moment I had most been waiting for: Mumford & Sons meet Avett Brothers meet Bob Dylan. Here's where I went from there:

* I'm watching the Grammies. Mumford & Sons are pretty exciting to watch, even while trapped on a tiny stage.
* And the Avett Brothers remind me of a folk version of Ben Folds Five.
* Bob Dylan just made these guys' life.
* There was a time I was convinced Katy Perry would be a one-hit wonder.
* Em.In.Em!
* Just so you know, it's not easy tweeting your way through an event a day after it happened.
* I'm watching the super-cheesy promotion of the Recording Academy--lots of pointing and loungey segues. Matthew Morrison was well cast.
* Impressive that Mick Jagger can honor the memory of Solomon Burke while totally forgetting all his lyrics.
* I wonder if Eminem's best rap album victory is tainted at all by Will.I.Am giving it to him.
* Sometimes you have to slog through a lot of Bieber to get to the Arcade Fire.
* I don't think I've ever seen Arcade Fire look happy before.


I ended my running commentary by quoting Arcade Fire as they performed the closing song, "Ready to Start" (ironic, no?):

"All the kids have always known
That the emperor wears no clothes
But they bow down to him anyway
It's better than being alone." 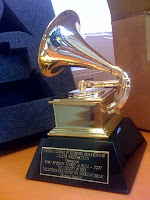 My posts generated a decent amount of interaction from a small number of people, none of whom were watching the show at the same moment but rather recalling the event from the night before or asking questions about stuff they hadn't seen yet. It may be, then, that the shared experience has itself become an asynchronous form of communication--not quite the watercooler conversation after the fact of an event, the Monday-morning quarterbacking that gives us something to talk about with friends we see only intermittently, but rather something different, something like watching a movie you've already seen with a friend who hasn't seen it. Your friend takes delight in watching the film; you take delight in watching your friend.
Email Post

TBone said…
That's what I see as the cool part of asyn (whatever you called it)- sharing stories about events, sharing reactions, building community around events even if you are not able to share them together. I will say this, I must be old. I had no idea who 50% of those Grammy people were.
7:25 AM