I've written before (here and here, most notably) on my concerns with corporate personhood. But lately I've been reflecting on another troubling trend: personhood incorporated. I don't suppose this is a new trend; celebrities, for example, have always had entourages--teams who attended to them and accompanied them everywhere. I think I started to realize that individual celebrities actually represented whole universes of employment and output when (a) I saw Bono from U2 congratulate a stageworker on his retirement during a show in Pittsburgh and (b) I heard some country singer talk about pop singer Adele's 2011 throat surgery and the economic impact on everybody who works for her thanks to canceled shows and delayed recordings. That actually helped me understand the phenomenon of celebrity better: it takes a village, it seems, to keep a fickle public interested in an actor or musician in between releases, and that sustained interest is a driver of success for future products. It's simple free-market economics. Then, of course, you have celebrities who are famous for nothing. The Kardashians are the most notable examples; they have any number of television series that consist of little more than home movies, with conspiracy theories suggesting that any drama that enters into these meandering documentaries is manufactured to keep the viewers interested. Even marriages and divorces, so the scuttlebutt goes, are contrivances cooked up to make us care about the Kardashians and get us to visit their stores and buy their fragrances or whatever. The Kardashians aren't exactly what I'm troubled by, though. They were absurdly wealthy before they got absurdly famous, and I think they simply (and very shrewdly) gamed the system that their celebrity friends are forced to play in order to expand an already profitable enterprise. I'm actually more troubled by the likes of "Honey Boo Boo Child," a young girl whose family has organized itself around her as their best shot at fame and fortune: first in the child beauty pageant community and now in the field of reality television. 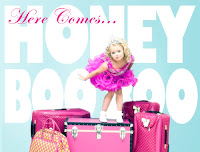 Honey Boo Boo Child is six. Her mom, I'm told (I don't watch the show), is the real center of the universe on the eponymous reality show, but Honey Boo Boo is the draw--sort of like, back in the day, when Madonna would star in a Guy Ritchie movie because he was her husband and, if she didn't, no one would go see it. Madonna wasn't just a person, she was a brand asset that could be exploited to good effect. Honey Boo Boo, at age six, is exactly that. Because these corporations are also people, there's a built-in symbiosis. Madonna benefits from the exploitation of Madonna by Madonna, Inc. Honey Boo Boo does likewise (assuming that the benefits that accrue to a child reality star are actually benefits in the long term). But symbiosis is not always a virtue. When resources go scarce, one side's needs dominate the other's. Whatever ecological harmony is achieved in any corporation, much less one that is built around a human being with a personality and personal needs, is vulnerable and easily toxified. The mind goes quickly to reality television when discussing people as corporations because there are so dang many of them. But I'm starting to realize that this phenomenon is offline as well. The children brought up in the age of helicopter parenting--parents orbiting their children and addressing each need immediately as it surfaces--are now adults, and in many cases the parent-child dynamic has entered adulthood with them. I've heard of parents helping their adult children with their professional growth, their day-to-day work, their housework, their graduate studies. The success of the whole family in these instances, it seems, is dependent on the success of the child because success has been defined around the child. It may take a village to raise a child, but it seems increasingly to take a child to justify a village. I'm not one to talk about "kids today" and all that. I think it's far too easy for people my age to critique people in their early twenties. I actually think the adult-onset helicopter parenting dynamic is more pressure-inducing on the grown child than actually helpful. With so many people's self-worth and sense of achievement weighing on their shoulders, I envision early-onset gray hair, ulcers and other stress-born struggles. I write this as a non-parent, incidentally; who knows what kind of pressure I might have put on a child by virtue of trying to protect her from all hardship and set her up for nothing but success. The logic of helicopter parenting is obvious to me: kids are your responsibility, and besides that you love them and want the best for them, and so you invest whatever you can in them. Turns out, we learn twenty years later, we can invest more of ourselves in other people than is helpful for them or healthy for us. It's good to acknowledge that no one achieves success on their own. God knows that whatever success I've achieved in life has a great deal to do with sacrifices my parents and other loved ones (and even casual acquaintances and total strangers, if I'm being honest) made on my behalf. The problem is that we've let success be defined by standards that are specific to very specific fields: what constitutes success has been dictated by moguls and heiresses, which places unrealistic expectations on parents and children alike. I can't be a mogul without stepping all over any number of people and neglecting the needs of countless others; if I want my children to be moguls, I'm going to have to let them step all over me. I once heard Andy Crouch suggest that all idolatry ends in child sacrifice; that's true of cultic religions, he says, but it's also true of the idolatrous inclinations of civilized society. By setting mogul-sized goals for our children, by organizing our families around the success of children, we lay them on altars of our own constructions, and we raise the knife. Only God can save us now.
Email Post

KlamMan said…
Bravo Dave. I heard Deb Hirsch say that we live in an age where the nuclear family is an idol that keeps us away from our calling of caring for the stranger and alien. I think she, and you, are on to something. Your last paragraph is one I will be pondering for a long while
10:32 AM

David Zimmerman said…
Hey Mike--thanks for that! Deb knows her stuff, doesn't she? I guess I'd add that idolizing our nuclear families corrupts the kind of love we owe and were in fact created to give our families. To idolize someone, just as to sacrifice someone, is an act of objectification, not an act of love.
12:12 PM