In the Year of Our Lord CCCXII, Roman Emperor Constantine beheld a vision in the sky of a cross, made of a spear, bearing the message "By This, Conquer." Shortly thereafter the destinies of the Roman Empire and the Christian Church were married, and they begat and begat and begat, and have been begetting ever since.

Frankly, I think McLaren is being a bit silly. "Conquer" is language an emperor can work with; by contrast, "serve" and "reconcile" are meaningless, even alien terms. The whole vision would have been incomprehensible, easily dismissed. Maybe "By this [communion table] or this [bowl and towel] conquer" would have worked, but I think a more cautionary vision would be more interesting: "By this [cross] shall you be conquered," perhaps--or, the image that's lately captured my fancy: "This cross kills elitists." 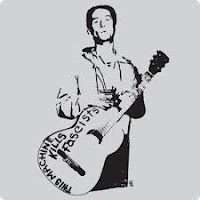 The great American protest musician Woody Guthrie decorated his guitars with the phrase "This machine kills fascists"--supposedly an allusion to fighter pilots in the Spanish Civil War--as an implicit message to the powers-that-be that their days were numbered. It was ironic, of course: a guitar can't kill anyone. Oh, I suppose it could if you tried hard enough: if you took the strings off and choked someone with them, maybe, or if you broke the car into shards and splintered someone to death. Highly unlikely though. A guitar, in the hands of most everyone, doesn't kill. The music, though . . . the music could, conceivably, topple empires.

In another era, a different symbol would offer a similar message. Who, after all, is more elitist than an emperor, inheritor of a life station equated by the people with gods? Such a person may be a fascist, but only because why wouldn't he (or she) be? If you had the authority and the funding to make everyone fall in line behind you and do your bidding, wouldn't you? And so fascism, I think, is a byproduct of a more insidious spiritual problem: elitism. And who is more elitist than the most powerful person in the world?

I am, I suppose. We live in an era of democratized elitism. We all (in the West at least) have experienced the privilege of bending reality to our will; we can have whatever we want whenever we want, on demand. We apply our experience of consumer sovereignty to our politics and culture, so that those who don't bend to our will are enemies to be vanquished. We're practical fascists, but we're everyday elitists.

This cross, though: it kills elitists. The ground is level before it; on the far side of it we are all brothers and sisters with one father--all parts of the same body with one head. Our claims to cosmic sovereignty are crucified on it; our wants are purified through it; our lives are transformed by it. As much as we might desire and even presume ourselves to be kings and queens of the world, by the cross all our elitist aspirations are conquered.

The world would look very different had Constantine seen the vision "This Cross Kills Elitists." Only two options would have remained for him: forswear his elitism, lay down his crown and transform the way the world understands power and leadership; or wipe Christianity off the map--in the same way Herod tried to wipe Christianity off the map in the Year of Our Lord I, when Jesus was born, fulfilling prophecies and announcing a different kind of kingdom. That didn't work out so well for Herod, and I daresay it wouldn't have worked out so well for Constantine. He's lucky he saw something else, frankly.

You can't change the past, I guess. But I think this cross still kills elitists--all evidence to the contrary notwithstanding--and that means each of us is faced, daily, with Constantine's choice: side with the elitists, or side with the cross.