Waking Up with Wendell Berry

I'm very newly into the novel Jayber Crow by Wendell Berry. It begins with a notice to the reader that I am trying hard to take seriously: 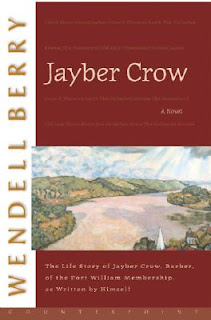 I'm trying, really I am, not to be the dreaded explainer. That is my bent, I'm afraid, but the author has asked in good faith and good humor, and so I'm trying hard to indulge him and honor his request. To resist explanation, it turns out, is to invite emotional resonance. I'm forty pages into Jayber Crow's 363 pages and already hopelessly in awe of the title character, telling his story in retrospect. By reading his memories of childhood I'm recalling my own memories; by way of his reflections on the impact of time and the wheels of progress I'm noticing how much the places I've lived have changed over the years, and how much I've changed myself in relation to them. I'm observing him observe these other people and recalling my own observations of the people whose paths I have crossed. It's not necessarily comfortable terrain for one such as I, so predisposed to deconstruction, but it's not a bad way to wake up in the morning. This morning I awoke to Crow, late in life, recounting his time at The Good Shepherd orphanage, where as some odd institutional protocol his name was truncated from Jonah to J., only to be recast at some later date as Jay and familiarized as Jayber. What follows is how my day today begins, and I expect it will shape how my day today unfolds.

For a while after they had come to The Good Shepherd, the newcomers were known as "newboys" and "newgirls." This status of newness we sooner or later simply wore our way out of. . . . I remember a little girl, the E. Lawler I mentioned before, who came to The Good Shepherd when she was about seven years old. She was a slight, brown-haired, sad-looking, lonesome-looking girl whose clothes did not fit. She looked accidental or unexpected, and seemed to be without expectation, and resigned, and so quiet that even in my selfishness I wished I knew of a way to help her. I watched her all the time. When her class went out to play, she did not take part but only stood back and watched the other girls. She always wore a dress that sagged and brown cotton stockings that were always wrinkled. She was waiting. I did not understand that she was waiting, but she was. And then one day as her classmates were joining hands to play some sort of game, one of the girls broke the circle. She held out her hand to the newcomer to beckon her in. And E. Lawler ran into the circle and joined hands with the others. I wrote E. Lawler in my tablet so that I would not forget her.

Kirkistan said…
One of my favorite Berry quotes come from Mr. Crow in Chapter 29 [http://livingstoncontent.com/2013/01/13/wendell-berrys-jayber-crow-christ-came-to-found-an-unorganized-religion/ ]
6:02 PM