Waking Up with Wendell Berry: This Is How You Make a Joke

Whenever I run out of things to write, I freely admit, I write about things I read. Such is the case today, and this week, and this past month. Maybe I'll get original again soon, but for now I'm resigned (and contented, oddly enough) to write about a novel I'm reading by Wendell Berry. 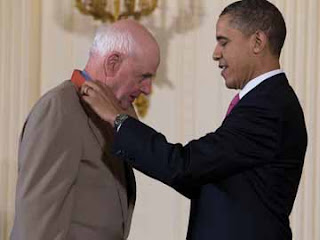 Jayber Crow, I've come to learn, is one of several books in the Port William Membership family--novels by Berry that occupy the same geographical space and chronological time. It's not the first, but so far as I can tell the sequence isn't that important. I've reached the point in this novel where Jonah Crow (who through a series of events came to be known as Jayber) has resettled himself in the town of his childhood, becoming the local barber. Small town folk don't take quickly to newcomers, and so now in the story Jonah is doing the slow work of making friends. The following scene is critical to that process, but it also strikes me as funny. It strikes me as funny because it's supposed to. Burley Coulter, Jonah's first adult acquaintance, is trying to make Jonah and others laugh. But he's mainly trying to make himself laugh, which amuses Wendell Berry and is meant to amuse us. And it works. This is, after all, the essential foundation of humor: You say out loud (or in print, which is roughly the same thing) what you find amusing. Sometimes it's observational; sometimes it's absurdist. Sometimes it's crass or profane or mean or insensitive. Sometimes it's a combination of some or all of the above. But you say it, or you write it, or you otherwise demonstrate it, and people discover by way of your demonstration, and by way of some shared experience with you, that it is, in fact, funny. Humor is a curative process. The making of a joke is sometimes quick and sometimes slow, but it is always methodical and never accidental. The humor we think is accidental has been curated after the fact, actually; we are ourselves the curators, making our own observations and judgments. Kids who say the darnedest things, for example, aren't trying to be funny; it takes the rest of us to identify and call out the humor in their innocence. Whatever it is, even at its most uncharitable, humor is conscientious, a bid to connect. Jokes are made; comedy is presented; laughs are shared. Here's how Wendell Berry does it in one scene from Jayber Crow:

One of the early signs of my acceptance into at least a part of Port William society was the following letter, folded once and stuck under the shop door in the dead of night: "Come to a little worter dranking party Sat night at the Grandstand. Whatever you want to delute your worter with will be fine." I did not then recognize the handwriting as that of my friend Burley Coulter. Had I done so, I might also have recognized at least one of the misspellings as the work of Burley's conscientious sense of humor. "Worter," as I would know later, was quoted from a famous letter-to-the-teacher written by Oma Wages on behalf of her daughter, who during her three years in the eighth grade had come to be known by the boys as "Topheavy": "Please let Bobra Sue be excuse when she akses. She cant hole her worter." That Burley wrote anonymously, making no attempt to disguise either his hand or his manner, was a joke on anonymity and on himself, his way of laying by a little something to laugh about at a later time.