Every Good Thing Begins in a Garden

I stumbled across a recipe yesterday that calls for, among other very trendy things like sea salt, "seven organic, free range eggs." My wife is thinking of making this recipe, which will result in some truffley, moussey, heart-unhealthy bowl of deliciousness for me, I am sure. But for now, it's just the latest instance of a recipe being, for me, a source of humor. There is no benefit to eggs whatsoever from being "free range." Eggs are immobile; set them down in a free range and they will sit there, slowly spoiling, until you return them to the refrigerator. I know, I know. "Free range eggs" are the output of free range chickens, which do benefit from the open space both in terms of health and dignity (for the chickens and for those who raise them). But you can't put a misplaced modifier in front of an editor and expect him not to poke fun at it. But seriously, folks. What really stood out to me about the organic, free range eggs wasn't the modifier so much as the signifier: this recipe is telling me which particular eggs to buy. Not those eggs--they're not organic, and the farming cosmoporation that brought them to market subjected the chickens that bore them to terrible, terrible living conditions. No, buy these eggs--these eggs that hearken back to simpler times, when human hands tilled the earth and fetched eggs out of the nests of loving hens. If your eggs aren't organic, aren't free range, then you're buying the wrong eggs. Your recipe is steeped in the blood and byproduct of factory farming. Even that isn't my point. My point is, if you're going to give such specific instructions about the eggs, why not go all the way? "Take seven eggs from your hen. Crack into a bowl. Separate the yolks. Whip the whites until stiff peaks form." Something like that. 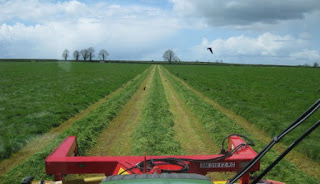 I'm trying to grow vegetables in my garden. I'm not very good at it--partly because I'm lazy, but mostly because really, what's the point? Why grow a tomato when they're, like, forty cents at the grocery store, and I'm going there anyway to buy some deodorant? Or, for that matter, why do I need a tomato in the first place? They come pre-diced in a can in aisle seven. And even then, if I have such a taste for tomatoes, why don't I just buy a Lean Cuisine in the frozen section, pop it in the microwave and get on with my life? Or, for that matter, why don't I just run by the Arby's and get myself an Ultimate BLT(tm)? Gardening is so far removed from my normal routine--slow instead of fast, dirty instead of clean, active instead of passive--that it takes a regular act of the will just to walk the twenty feet or so from my TV to my garden plot to see what's happening. And yet I keep trying, year after year. And eventually I get something to eat out of it. I think it helps me--and I say that I think this because it only occurred to me this morning--to think of a garden as part of a recipe. No one cooks today because they must; it's too easy to get food without cooking. People cook because the experience of cooking has reward to it: health rewards, for sure, but also emotional rewards of accomplishment, physiological rewards from slow and focused activity, and sensual rewards from the scents and sensations along the way. When you take the long view of gardening, you see the essential steps of gardening not so much as labor but as a process akin to cooking, complete with its own rewards. When I spend an evening weeding, I'm not tending to the garden; I'm accomplishing something while indulging in a multisensory experience. I'm not weeding; I'm making soup. I think this will help me. I won't be sure till several days from now, several days' worth of positive self talk while crawling around pulling weeds and scaring off rabbits. "I'm making soup. I'm making soup. I'm making soup." My neighbors will probably think I'm crazy; if you want soup so bad, just make a run to Panera. I'm reminded of something cosmologist Carl Sagan once said: If you wish to make an apple pie from scratch, you must first invent the universe. That's what a garden is, in a way: a universe from which everything we need emerges, the point of origin for every good thing. In gardening we reconnect ourselves to the fundamentally creative nature of the universe we find ourselves in. We watch goodness come to life, and we ourselves have a hand in bringing those good things forth. Too bad I'm not very good at it. Maybe next year I'll be better.
Email Post