I wrote the following post for Hug an Author Day 2012. It still rings true today. *** I should really probably start keeping a gratitude journal. I think I learned about such things from Oprah--indirectly, of course, via my wife. Write down what you're thankful for in life on a regular basis, and magically your thoughts will be transformed from paranoia and bitterness to gladness and a general openness to the world. In the third millennium of the church, it seems, God uses gratitude journals as much as anything to take people's hearts of stone and turn them into hearts of flesh. I could list any number of reasons I need to start keeping a gratitude journal. An ingratitude journal would be easier for me, quite frankly; I've been called Eeyore by more than one person in my life. But to preface my gratitude journal with a list of laments seems somehow counterproductive. Light a candle, they say, and there will be little darkness left to curse. So I'll just start with gratitude, and in so doing I'll start with authors. Ah, authors. They are the wingnuts that hold the whole publishing enterprise together. I publish people, not books, I regularly remind myself, because books don't wish me happy birthday on my birthday or graciously include me in their acknowledgments even after I've dropped the ball more than once on their precious project. Authors do that. Before there is a book, there is an author. Books are not an end in and of themselves but a means to both the author's and the publisher's end: in IVP's case, to equip and encourage people to follow Jesus as Savior and Lord in all of life. That's a lofty ambition, and you don't get there just by assembling random words on a page and mass-producing it; you need authors with hearts, souls, minds and strengths to put forward such audacious ideas and give them life. I appreciate book authors for that. I appreciate book authors because unlike communicators who look directly into the eyes of their audience or who write with the assurance of a subscription base putting eyes on their words, or who have access to analytics that help them gauge and react quickly to reader response, book authors publish into a void and wait--sometimes months and even years--to learn the impact of their words. As glamorous as being an author appears, in many ways it's actually quite thankless. Worse than thankless, sometimes being a book author seems to be more trouble than it's worth. Once a book is out, its author has to cash in favors, chase an audience, move units, all in coordination with a publishing house biting its nails and tapping its feet to see if the potential audience takes the bait. Even more pressure descends on the self-published author, who faces the same demand with ewer resources (and less moral support) to draw from in their effort to get their message out. Authors wait anxiously for the first and then the next review, and thanks to an increasingly uncivil and combative cultural context, it's reasonable to expect as many negative reviews as positive. And then there's the conventional wisdom that assumes the last thing anyone wants to do is to read a book. Books are too long, too wordy, too linear, too monochrome, too, too, too. Some ideas can't be crystallized into a sound bite or conveyed in an image--everyone knows that--and yet the notion of giving an idea adequate space to make its case is considered among many as quaint at best, stupid at worst. "Great minds discuss ideas," Eleanor Roosevelt said, and yet book-length attempts to discuss ideas in a format that allows them to be considered in full scope are out of vogue. It's hard out there being an author, I tell you. Hey, look at that. My gratitude journal has become a list of laments. I really am quite good at that, aren't I? OK, so maybe instead of a gratitude journal, I'll just start a new tradition: Hug an Author Day. Seriously, given the portrait I've painted above, don't you think an author could use a hug? So let's do it. Let's say September 15. Why not? Don't be creepy or anything--a side hug counts as a hug in my book. But let the authors you know know that you love them, that you get that it's hard, that you still appreciate the hard work of giving an idea its due. Give them a hug, people! Or, better yet, buy their book and read it. *** So, which author would you like to give a hug on Hug an Author Day? Post their names and why you want to hug them here! 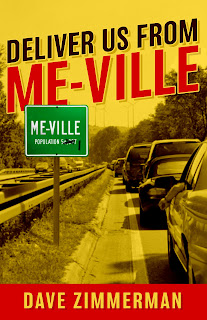 On the off chance that it's me ... My book Deliver Us from Me-Ville is available as an ebook for 99 cents for a couple more weeks. If you haven't gotten the book yet, you can get it for a song right now. (Seriously; it's cheaper than "The One That Got Away" by the Civil Wars.) One reader called it "a joyfully sarcastic look at our own self-absorption from a Christian perspective." That reminds me: if you post a review of the book during the sale, send me a link and your mailing address, and I'll send you a free copy of my booklet Parable of the Unexpected Guest.
Email Post