In Search of a Chaordic Conference: The Permanent Revolution Roadshow

I'm now mostly through The Permanent Revolution, the case for a rediscovered apostolic ministry from Alan Hirsch and Tim Catchim. I'm highlighting a lot; it's a rich and energizing book, one that I'll return to a fair bit. It's evidence of Hirsch and Catchim's particular genius that they've read as much as they have, let alone that they've so effectively synthesized it for the church. I have, for example, roughly outlined two followup books from Hirsch, whenever he's ready. 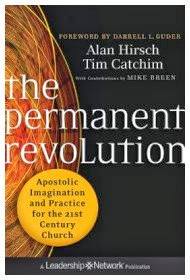 The thing that's in my head right now is the notion of chaordic ecclesiology--the notion that a church should be equal parts chaos and order. Hirsch and Catchim appropriate the term chaordic from Dee Hock, founder of Visa and author of The Birth of the Chaordic Age. A chaordic organization "has a deeply held purpose and set of principles at the very center . . . and yet also has high creativity at the edges." As Hock puts it,

To the degree you hold purpose and principles in common among you, you can dispense with command and control. People will know how to behave in accordance with them, and they'll do it in thousands of unimaginable, creative ways. The organization will become a vital, living set of beliefs.

I don't suppose anyone reads that and pictures a church. I certainly don't, which is one of the problems Hirsch and Catchim identify in the contemporary Western church. Not enough chaos, mainly, and yet also not enough order: local churches and global denominations alike are bound more by cultural commonalities and external commitments (such as statements of faith, catechisms and other organizing documents) than they are by a unified and internalized vision. Chaos and the creative process that resembles it are viewed with suspicion; meanwhile bureaucratic checks and balances replace the internal logic of a well-ordered system. Don't believe me? Among other characteristics of a chaordic church (which, Hirsch and Catchim suggest, would characterize the church of the first century, as well as the contemporary secret church in China) are the following, all of which eschew bureaucracy and invite creative chaos, none of which are visible in most Western expressions of Christianity:

* Are self-organizing and self-governing in whole and in part * Are powered from the periphery and unified from the core * Are durable in purpose and principle and malleable in form and function * Learn, adapt and innovate in ever-expanding cycles * Liberate and amplify ingenuity, initiative, and judgment * Equitably distribute power, rights, responsibility, and rewards * [Are] compatible with and foster diversity, complexity, and change * Constructively use and harmonize conflict and paradox

Bottom line: the church, in its primal, chaordic state, was organized not as an institution or organization but as a movement. The contemporary Western church is not primal, nor chaordic, nor a movement. I think I would very much like a chaordic church. But I'm a realist: churches aren't changed by good ideas. They're changed by changing expectations. Churches change from the outside in. Youth group members grow up and return to church expecting loud music and chubby bunnies, and where they don't find them, they agitate for them. Enough pastors find enough interesting ideas in enough business books, and suddenly churches have org charts and executive pastors and mission statements and marketing budgets. Change in churches is like sleight of hand; it only works when people are looking somewhere they wouldn't otherwise look. A good liminal space for such subversion is the contemporary church conference. Most church conferences, of course, aren't especially subversive: they have their own form that they're accustomed to, and they follow it as slavishly and blindly as most of us follow the Kardashian family. So conferences sandwich a few innovative ideas in among lots of bangs and whistles and sounds and fury. You sing a little, you listen a lot, you spend a little money, you trade business cards, and you go home. It's a lot like church, actually. But a chaordic conference, now that would be interesting. I imagine a conference in which equal time is given to the celebration of order--those organizing purposes and principles that bind us together, some more consciously than others--and to the celebration of the often chaotic creative process. I go to a fair number of conferences, and I for one would like to not be a consumer of them so much as a participant in them. I'd like them to require creative collaboration from me and call on me to reaffirm who I am in community with everyone else present. I'd like to go to a conference expecting to be recentered, so that I go home with a renewed and even clearer sense of what motivates me in my mission, and to be stretched, so that I am more alert to the shortcomings in my local context that have perhaps been sanctified by the status quo. I'd like both these itches scratched, and yet when it's over I'd like them both to continue to itch. So, that's what I want. How to get it--ah, there's the rub. In my next post I'll explore some possibilities, based on best practices I've observed. Till then, though:

* What church-related conferences do you find most compelling, most resonant, most chaordic? * What makes them that way?