The Chaordic Church in Open Space: From Fetishizing Order to Embracing Chaos

Nobody likes chaos. Chaos is a dirty word. It sounds stressful -- like you know that h is in there somewhere but you can't quite flush it out; it just sits there silently, making your life harder. The only time I hear chaos spun positively is when it's creatively juxtaposed with something more orderly -- like "organized chaos," or "controlled chaos." The phrase shows up when someone is describing the creative process, or when someone is talking about a particularly generative team or communal environment. The writers room on your favorite TV show: controlled chaos. The recording studio for your favorite band: organized chaos. We actually like chaos -- we acknowledge its creative potential -- so long as we maintain order. I use the term creatively, by the way, with as much tongue in my cheek as those who use terms like "organized chaos." It's not creative, actually; it's quite cliche. I've used it myself with the kind of smug satisfaction I imagine others using it. The subtext of a phrase like "controlled chaos" is something like "See what I did there?" or "Aren't I clever?" But the fact that this cliche endures is testament to how valuable we actually understand chaos to be. Imagine a world of nothing but order, nothing but control. Where such a tightly organized world has existed in the past, where chaos has been so effectively rooted out -- we describe those times and places as "tyranny." Why do we assign so much value to order and view chaos with so much suspicion? Imagine if the creative juxtaposition were flipped: if instead of winking at chaos we embraced it, and instead of genuflecting before order we subverted it. "Arcade Fire recording sessions are a kind of 'suppressed creativity." "Putting together an episode of Game of Thrones is like an exercise in generative fascism." It doesn't work, does it? But the reason it doesn't work isn't because chaos is inherently bad, or even because chaos is inherent to the creative process. It's because we fear creativity and fetishize control. In my previous post I looked at the kind of "chaordic" (chaos+order) ecclesiology hinted at in The Permanent Revolution by missional church leaders Alan Hirsch and Tim Catchim. A church that gives as much energy to innovation and adaptation as it gives to deeply seeding its core convictions and beliefs -- not more, I have to add to placate the heresy police, but not less -- is a church that keeps its "movementum" as a cohort of missionaries. It retains its relevance without bowing to trends and dancing around controversy. It uses what power it has rather than amassing as much of it as possible. It values order and organization as both an efficiency for its movementum and as a witness itself to a God who loves order without idolizing it. 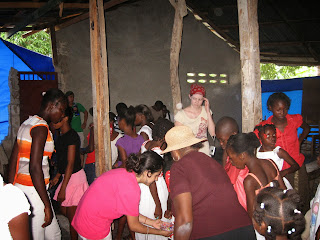 When I was in Haiti I sat in on a regional conference of educators, organized by the U.S. evangelical mission Haiti Partners. One by one the teachers introduced themselves, each of them including some iteration of the unusual phrase "I practice open space technology." My friends at HP, Kent Annan and John Engle, later described open space to me: it's a way of convening a meeting that begins with no agenda, only a theme and a facilitator who can organize settings. Participants nominate breakout sessions and then serve as hosts for those sessions; the facilitator sets a place and time for each session, and participants decide which sessions they want to make sure they participate in. Each session takes notes and reports back to the whole group the gist of what they discussed. Open space meetings, when well run, are perhaps paradoxically highly disciplined and productive times. They are also highly democratic: anyone in the room can lead a breakout session, regardless of tenure or notoriety. People's passions are channeled into real outcomes, and meanwhile they are revitalized in their commitments to their colleagues and the convictions that brought them together in the first place. This, to me, sounds like the first-century gatherings of the fledgling church. It sounds like what the apostle Paul had in mind when he simultaneously held up order and chaos, control and creativity, as inherent to the church's mission.
Email Post

Daniel Efosa Uyi said…
hey nice post mehn. I love your style of blogging here. The way you writes reminds me of an equally interesting post that I read some time ago on Daniel Uyi's blog: How To Always Be Tracking Your Progress On Each Goal So You Don’t Lose Guard .
keep up the good work.