Marry Our Fortunes Together: Sting and Paul Simon in Concert

I have had the good fortune of seeing several living legends in concert. Paul McCartney, Ringo Starr, Bill Cosby, Bob Newhart, Peter, Paul & Mary, David Bowie--some lived up to their legendary status, others have not. How they do isn't entirely the point; the point is to participate, to have a point of contact with someone who in small and big ways marks our cultural history for us. But most of them were awesome anyway. Last night I got to kill two old birds, Sting and Paul Simon, with one rock show at Chicago's United Center. Sting--the lead singer, bassist and main songwriter from one of my favorite bands, the Police, whose solo work was always in the background of my late adolescence and early adulthood, eluded me for years before I finally first saw him perform in the late 1990s. He's a true artist, regularly reinventing his songs and reconstructing his band accordingly--as a saxophonist, for example, I was sad when he parted ways with Branford Marsalis and started favoring the trumpet in his arrangements. The trumpet! I suppose I'll still listen ... Paul Simon is, it turns out, one of Sting's "mentors," an idol even to other idols. His music didn't just shape me, it shaped a generation--two generations, actually, as his constructive engagement of African musicians in the 1980s was as influential as his New York folk standards from the 1960s and 1970s. I sat next to a woman probably ten to fifteen years older than I am; we sang along to many different songs, but we sang along together to even more. I like the premise of a show like this. It requires a level of musical maturity and mutuality; Simon must appreciate Sting as much as Sting appreciates Simon; Sting must take ownership of Simon's songs as freely as Simon does his. And then, of course, they have to blend with one another. In this case, that's no mean feat: far beyond the typical pop orchestration--drums, bass, guitar, keyboard--each artist's repertoire required a wide range of additional instrumentation. Their bands had to learn one another's songs, had to gel with one another, the musical equivalent of Simon's lyric from "America": "Let us be lovers; we'll marry our fortunes together." Two bands become one band, never losing their own identities, creating something new and dynamic and meaningful. 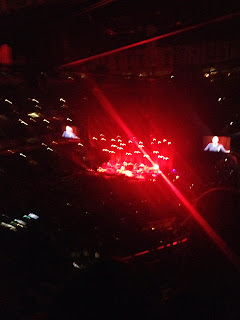 As eclectic as Sting can be, he played to the crowd last night. Before he was a tantric Viking living in a castle, doing yoga and playing the lute, he was a hardscrabble musician fronting a leading British new wave band, competing for fans with the likes of Elvis Costello and the Clash. So he knows how to rile people up. He name-dropped Chicago a lot, each time eliciting a loud cheer; he and his background singer frequently encouraged the crowd to take over the vocals, which only made us happier. Even though Sting is debuting a Broadway-bound musical in Chicago later this spring, he steered clear of the unfamiliar stuff. He didn't even mention the musical, let alone play any songs from it. No, his set list was, by and large, limited to the hits, stuff we'd all heard a million times, stuff we drove in longing to hear. Simon, however, leaned into his status as the pop music sage. His first song, performed alongside Sting and immediately following Sting's adult-contemporary opener "Brand New Day," was the subversive "Boy in the Bubble": "It's a turn-around jump shot," he sang in the house that Michael Jordan built.

In contrast to Sting's radio-friendly list, Simon went for a few deep tracks. I took notes for each tune, but what I wrote down for a whole set from him was not song titles but phrases like "Some zydeco song" and "Some song about wandering in Mexico." He has enough gravitas that he could get away with it; we followed him wherever he took us. (It's probably worth noting that I'm much more familiar with Sting's discography than Simon's, so what counts as a deep track to me might be very familiar to Simon diehards, and similarly, I might be misremembering a few Sting songs as chart-topping that were, in reality, B-sides or even more arcane.) Anyway, here are some of my highlights: * Paul Simon, dancing wildly backstage as Sting performed "Walking on the Moon. * Sting performing a tender version of Simon's "America," which suddenly exploded into a raucous rendition of "Message in a Bottle." * Simon pivoting from a Chet Atkins instrumental ("Wheels") into the Latin-flavored, drum-heavy groove "The Obvious Child." * Simon and Sting wrapping "Bridge Over Troubled Water" and moving straight into "Every Breath You Take." * Simon and Sting closing the night with a tribute to the late Phil Everly, "When Will I Be Loved." 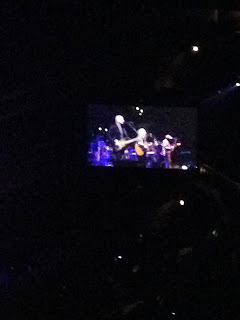 Here's the set list: Together Brand New Day Boy in the Bubble Fields of Gold Sting only Every Little Thing She Does Is Magic Englishman in New York I Hung My Head Driven to Tears Walking on the Moon Together Mother and Child Reunion Paul Simon Fifty Ways to Leave Your Lover Dazzling Blue Graceland Still Crazy After All These Years Me and Julio Together Fragile (sung by Paul Simon) Sting America Message in a Bottle Hounds of Winter They Dance Alone (Gueca Solo) --Sting notably left off the verse directly addressing Chilean dictator Agusto Pinochet Roxanne Desert Rose Together The Boxer Paul Simon That Was Your Mother(?) Hearts and Bones(?) Misty Train(?) --a cover, Simon called it his "favorite song" Wheels (instrumental by Chet Atkins) The Obvious Child Diamonds on the Soles of Her Shoes You Can Call Me Al Together Bridge Over Troubled Water Every Breath You Take Late in the Evening Encore When Will I Be Loved --no band, just Sting and Paul Simon, one mike and a couple of guitars
Email Post

Unknown said…
That was an amazing show that easily makes my top five of all time.
7:32 PM

Unknown said…
That was an amazing show that easily makes my top five of all time.
7:32 PM