My friend Sean Gladding, one of the best people in the whole world, has written his second book, Ten: Words of Life for an Addicted, Compulsive, Cynical, Divided and Worn-Out Culture. Sean is a strong and sympathetic storyteller, helping us enter into familiar stories and even familiar theological assertions--in this case, the Ten Commandments (or Ten Words, as he prefers)--with fresh perspective. 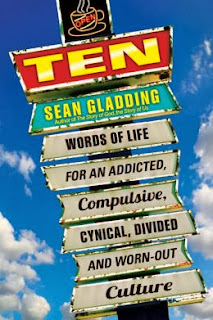 The story begins with an angry patron of a coffeehouse thrusting a newspaper under the nose of an unsuspecting local pastor. The Ten Commandments have been politicized yet again. What comes next is a weeks-long group conversation about what's really behind each of the Ten Words, what's really behind our visceral reactions to them and our efforts to understand and uphold them. I thought it might be fun to run a kind of "Ten Commandments Scavenger Hunt." I'll send a free copy of the book to the person who posts the news article, song, image or other artifact that best illustrates the commandment of the week in contemporary life--either here, in the comments, or elsewhere with the hashtag #10Cscavengerhunt.

Last week's winner was Karl Mitchell, who has excellent taste in music and blogs at Ponderances of a Visionary. In response to the post on covetousness (the Tenth Word--Sean counts them down in reverse order), Karl offered this little ditty:

@ivpress #10Cscavengerhunt I want your phone even mine is perfectly good.

See how easy it is? You can do this! I believe in you! So, without further ado, here's the ninth commandment, along with an excerpt from Sean's book.

You shall not bear false witness against your neighbor. (Exodus 20:16, New American Standard Bible) "Maybe the Ninth Word still has something to say to us. Because all these ways of bearing false witness against each other, whether through advertising or gossip or telling racist jokes, lead to one thing: the erosion of trust. And without trust, how is it possible to have any kind of genuine communication? How is it possible to have any kind of meaningful relationships with others?" [John] reached for another book. "Truth telling is thus not a general virtue so much as it is a necessity for maintaining harmonious relationships. It is one of the clearest manifestations of love of God and love of neighbor." . . . Will interjected, . . . "A little half-truth here. A little deception there. A little doubt sown here. A little gossip there. A little rationalization, and slowly the trust necessary for relationships unravels. Everything comes undone. Every word of deception carries a price tag. Every lie. Every half-truth. Every untruth." He leaned forward. "And here's the irony of our situation. When we bear false witness against our neighbor, we think our neighbor is the one who is going to pay the price. That's why we do it. . . . But the reality is, we bear the cost." . . . "Joan Chittister says this, 'Truth is its own reward. It requires no memory. No elaborate explanations. No conspiring confederates. And no fear of exposure.' Telling the truth is liberating."

So, there you have it: a taste of the Ninth Word from Sean Gladding's Ten. Now it's your turn. Fetch me an example of bearing false witness--of lying, or gossiping, or dehumanizing, or even advertising--from somewhere in the broad cultural landscape. Use the hashtag #10Cscavengerhunt. The best example gets a free copy of the book. I'll announce the winner next week. Don't worry: you can trust me. And do me and Sean a solid and spread the word about this contest; when it comes to scavenger hunts, the more the merrier, I always say. (That's a lie: I actually almost never say that.)
Email Post