Refugees Are People Too: Some Resources for World Refugee Day

Some problems are global problems, and when you scale out problems to the level of the globe, it's hard to keep the fine points of detail in view. There are over 40 million refugees and internally displaced people around the world. These are people who have been forced to flee their home countries (or to flee within their home countries) to escape persecution (either direct and individual, or as part of a "persecuted social group") or the effects of war and other conflict. The UN Refugee Agency estimates that 80 percent of refugees and internally displaced people are women and children.

So often a day is all we have time for, but so often a day is all it takes to open our hearts. For the past several years the U.S. State Department has admitted around 80,000 refugees annually into the United States. The home countries of these refugees are distributed throughout the world, and percentages per region are adapted according to need. A number of non-governmental agencies assist in placing these refugees throughout the United States, some for short periods until a safe return home is possible, and many for permanent relocation. These are all big numbers. What's worth thinking about is that upwards of 80,000 times a year someone is moving into a neighborhood who has never been in the United States before. They're figuring out how stuff works. They're learning (often the hard way) which of their local customs will or will not be tolerated in their new community. They're learning new languages and new monetary systems, even new street signs and rules of the road. They've left something awful and landed in the midst of something bewildering. They need good neighbors. I'm privileged to be on the board of a group called Exodus World Service, which in Chicago recruits churches and other groups to welcome refugees to the community, with move-in packets of necessary resources, with visits and meals and playdates, and more generally with enough expressions of kindness and support
to make the refugee's resettlement a little less unsettling. The

logic of Exodus requires that people be willing to step out of their comfort zone and enter into the awkwardness of a new, cross-cultural friendship. Sometimes these new relationships click, and sometimes they don't. But the value is in the trying, in the welcoming. Getting up the courage to initiate with someone from literally the other side of the world can be a bit of a challenge. So today, on World Refugee Day, may I recommend a couple of resources that will shore up your strength? 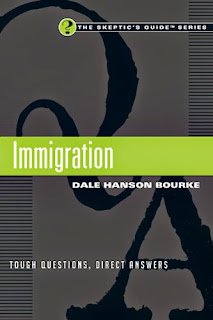 Immigration, by Dale Hanson Bourke. This brand new book starts with the assumption that Americans are perplexed by immigration. Dale does the hard work of sifting through the enormously complex immigration system in the United States, as well as the incredibly complicated world refugee situation, and filtering down to the most helpful basic information - enough to overcome the intimidation factor and allow you to see refugees and immigrants for what they are: human beings with often difficult life stories who don't need to be rendered as statistics but rather cared for as human beings made in the image of God - as neighbors, which is what they are. Full-color photographs and helpful charts and figures throughout. Order it direct from the publisher here. Ah Mu Weaves a Story, by Sarah Gilliam. This beautifully illustrated book tells one family's story of their journey from Burma to the United States. Written for children, it inspires resilience and hope while gently introducing the challenges refugees face both at home and in their resettlement. Children will love it; adults may well weep over it. Order it direct from the publisher here.

June 20 is World Refugee Day. The name of the event is a nice juxtaposition: "World," because this is one of those global problems that so easily overwhelms us; "Refugee," because those 40+ million refugees and internally displaced people throughout the world, those 80,000 refugees recently resettled in the United States, each have their own stories to tell, their own grief to bear, their own needs which only a friend can attend to; "Day," because so often a day is all we have time for, but so often a day is all it takes to open our hearts to a whole new world. Whether you get hold of these resources or not, I hope today you'll join me in praying for refugees and internally displaced people throughout the world, and I hope you'll consider how your story and that of a refugee near you might intersect.
Email Post

Anonymous said…
'Some problems are global problems'
2015 there are over 3 billion refugees roaming the planet looking for a safe place to stop.
Last month 150 men women & children were illegally transported from Turkey to Greece where the Greek authority picked them up. They have not been seen since - vanished. It is believed that the authority that picked them up killed them, a problem solved.
500.000 Christians were expelled from Syria over the 3-4 year civil war, where are they now ?
Mostly dead I fear.
2010 Australia had 1-2 boats or refugees arriving each day, PM as of 18 Sep 2013 - Tony Abbott & his counterpart in Malaysia have stopped them completely. There is a concern that the boats are left to sink - if this is the case it has been 611 days X 50 boat people a day.
The problem is not 'a refugee problem'
These are people like me, just like me, ordinary people who are victims of Trans National Organised Crime Syndicates, lawless mavericks who rule the world with brute force for profit & adventure - thrills.
Snatch & grab anything & everything in sight & destroy what you can't take with you cowboys.
Why do we pretend other wise ?
I had nothing to do so I went looking for something to read.