Platform for Postmoderns: Writing for Free & for Freedom

The following originally appeared on the High Calling blog. I'm a little short on ideas at the moment, so I repost it here as part of my series on platform for postmoderns. Read part one of that series here, or the whole series (in random order) here. There was a time in my adult life where my wages were a result of my fundraising efforts. I was horrible at it. I lasted about two years, and only then by taking job after job of the oddest sorts. Finally I admitted defeat and secured a position at a not-for-profit publishing company that paid me a set hourly wage. Instead of cajoling or guilting my friends every month, now I only had to keep my bosses satisfied. Around that time I was getting the itch to write—and by “write” I don’t mean keep a journal or send letters to loved ones that didn’t involve asking them for money. I mean writing for publication, so I set to work getting my name out there. I’m about as good a networker as I am a fundraiser, but I managed to make a couple of connections that led to some intermittent assignments and a corresponding byline. I was living the dream—if by dream you mean a steady paycheck and some cash on the side, with an occasionally indulged delusion of grandeur. 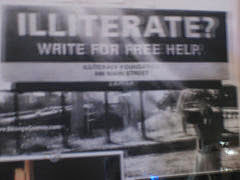 I still work in publishing, and so the collision of fame and fortune is almost part of my job description. Several times a year I put a book contract in the mail to someone who’s always dreamt of writing a book; when I get the contract back from them, I send them a check. Sometime later, I send them a printed book with their name on the front and the back and the spine, and typically another check. It’s generally a tossup whether they’ll be more excited about the book or the check. I get it, when authors care more about the money than the book. For one thing, who wouldn’t want a little more brass in pocket? But more than that, these days anyone can write anything for easy and cheap public dissemination. Getting paid to write these days is more than just remuneration; it’s validation.

TWEET THIS: Getting paid to write these days is more than just remuneration; it’s validation. I get it when the book wins out too, though: money is fleeting, but a Library of Congress entry is forever. Besides, for many people a book is a door-opener, making it possible to speak in front of large crowds and create new revenue streams for themselves. Sometimes the least profitable outcome of an author’s writing is the royalty check. But step back from this fame-fortune matrix and you start to see a problem: everything, from your name to your innermost thoughts to your way of turning a phrase, is a commodity. You no longer create just for the sake of creating; you create to exploit, and everything is exploitable. You reach a point where you catch yourself mid-thought and think instead, Where can I pitch this? Once, when I was regularly failing to hit my fundraising goals and desperately cutting costs to get by, my monthly letter took an introspective turn. “If something’s worth doing,” I remember writing, “it’s worth doing for free.” I remember leaning back from my computer and wondering if I actually believed it. And of course, it’s easily countered by no less than the apostle Paul reminding us that the worker is worth his wages. But I remember deciding that I did, in fact, actually believe it. And it’s changed how I write, and even how I think. Writing for free, it turns out, is actually freeing. It turns out that exploitation doesn’t just affect the exploited; it also affects the exploiter. These days I write what interests me, and I don’t write what bores me. If people want to pay me, I welcome their money, but if something doesn’t strike me as worth the time and energy it’ll take me, these days no amount of money will sway me. (At least no amount I’ve been offered to date.)

TWEET THIS: Writing for free, it turns out, is actually freeing. No less than Jesus the Christ once said that you can’t serve both God and mammon. That’s not a statement about mammon; it’s a statement about us. You can’t serve both God and food either, but that doesn’t mean you give up eating forever. You just choose who you’re going to serve, and you do what makes sense. Sometimes that means a little brass in pocket, but sometimes it means that if something’s worth doing, it’s worth doing for free.
Email Post