The Simple Act of Singing Together

The other day I had occasion to dig around in the trunk of my car, and among other treasures I found was what has become my soundtrack for the week: Farewell to the World, the double-CD of Crowded House's final concert (in its original lineup) from the Sydney Opera House. Lead singer Neil Finn is one of the world's great living pop song writers, and that is surely on display, but the thing that's captivated me on this listen, the thing that keeps me listening - the thing that makes me glad for an excuse to get in the car, quite honestly - is the band's showmanship.

"She came all the way from America. She had a blind date with destiny."

A crowd that had waited on their feet the whole day hears that line from "Mean to Me" off the band's first album and erupts in no-longer-contained excitement. The band knew it would happen, and they milk it and reward it throughout, with interactive interruptions to the set, like a call-and-response recitation of a beer slogan, a segue from the nightmare-inspired "Sister Madly" into "Climb Every Mountain" from the musical Sound of Music, and a Tina Turner impression that I can only guess is of her dancing, not her singing, since it's announced from the stage but YOU DON'T HEAR ANYTHING. 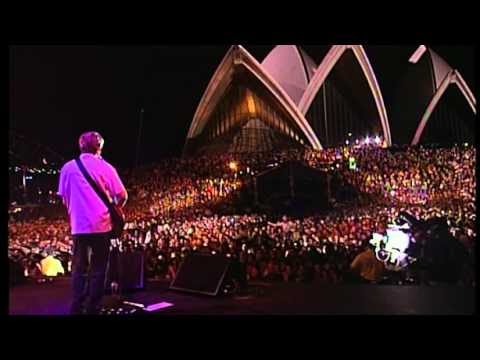 An unbelievable energy fills the record from beginning to the final chorus of "Don't Dream It's Over," with the crowd singing along and occasionally taking over singing and not bothering to forgive the band when the drummer drops his sticks or the guitarist plays the wrong chord or the singers butcher the lyrics of "Italian Plastic" because there's nothing to forgive: the goal of the evening has been achieved, the world and the band have had and bidden their fare-thee-wells.

You can't end a Crowded House concert with anything other than "Don't Dream It's Over," their first and most enduring hit. But the song that I keep going back to, the one I play on repeat, isn't a Crowded House song; it's not even an entire song, actually. It's the chorus of a song by the Australian group Hunters & Collectors, a song that has become a treasured classic there even though it's hardly known here in the States. The band quickly cedes the singing of it to the audience.

"We may never meet again. So shed your skin and let's get started. And you will throw your arms around me."

The original version of the song is intensely overproduced in all the ways you might imagine a mid-1980s pop song might be overproduced - sonic equivalents of too much hairspray and eyeliner and apocalyptic angst. But here it's stripped down: an electric guitar strumming the chords and thousands of people shouting the wordless refrain in unison. Originally an ode to a sexual encounter with a lost love, in the Sydney Opera House it takes on a more transcendent quality: Our lives are so fleeting, so transitory, and yet the things we do even in the limited encounters we have with one another can go on and on and on. Let's not weep over it; let's allow ourselves to be awestruck by it. Let's give ourselves to this moment together.

This is the sort of dynamic that churches all over the world would give their left lung for, I think. There are a lot of naysayers who think that contemporary praise and worship are thinning the theology of the church, that the fault for the church's cultural decline lies square at the feet of songwriters and worship leaders who force congregations to repeat the same pious pillow talk over and over and over again. I can see their point; song lyrics should mean something, and too often in mass-marketed pop worship (likr mass-marketed pop anything) they start to mean nothing. But there's something that those who fetishize ancient hymns often overlook: We are bound together not just by what we sing together but by the simple act of singing together itself.

TWEET THIS: We are bound together not just by what we sing together but by the simple act of singing together itself. "Our lives," Dorothy Bass writes in the introduction to her book Practicing Our Faith, "are tangled up with everyone else's in ways beyond our knowing." It's why we can sing a nonsense lyric such as "Oh yeah!" at the top of our lungs alongside 160,000 other people and walk away feeling like we've been to church. We already know what we know, what we believe, what we assume to be true. What amazes us is the hints we get here and there that there is more to it than what we know, that there is life and meaning and majesty beyond us. It's why atheists are having church services now, and it's why even agnostics and cynics and Baptists will still receive the Eucharist in moments of pregnant silence. It's why message art of any kind is so hard to pull off: putting too fine a point on our songs and paintings and films and sermons and blog posts for that matter stops a moment of transcendence in its tracks and shouts "Did you see what I did there!?!" My point? I guess it's this: You don't have to make a point to make a moment sacred; you just have to enter into it, receive it and take it with you. And it helps if you're not alone when you do it.

TWEET THIS: You don't have to make a point to make a moment sacred. You have to enter into it, receive it and take it with you. Here's video of Neil Finn singing the entirety of "Throw Your Arms Around Me" with his friend and Pearl Jam front man Eddie Vedder. I hope you enjoy it, and if you can muster up the moxie, I hop you join in on the chorus.
Email Post