Values Voting and the Wheel of Misfortune

On one occasion a values voter stood up to test Jesus. "Teacher," he asked, "what must I do to inherit eternal life?" "What is written in the Law?" he replied. "How do you read it?" He answered, "'Love the Lord your God with all your heart and with all your soul and with all your strength and with all your mind'; and, 'Love your neighbor as yourself.'" "You have answered correctly," Jesus replied. "Do this and you will live." But he wanted to justify himself, so he asked Jesus, "And who is my neighbor?" 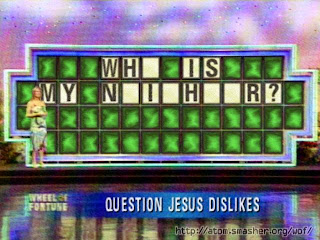 In reply Jesus said: "A Jehovah's Witness was going door to door in a suburban neighborhood, when he was attacked by some folks who didn't appreciate being interrupted during the lightning round on Wheel of Fortune. They stripped him of his clothes, beat him and tossed him from their entryway to the sidewalk, leaving him half dead. "A volunteer for the ______________________ Party happened to be canvassing the neighborhood, warning residents about the evil deeds of the incumbent candidate, encouraging them to vote the bum out in the upcoming election. When he saw the man, he stepped over him and wisely decided to skip on to the next house. "So too, a volunteer for the incumbent candidate, eager to alert residents to the out-of-touch and dangerous policy positions of her candidate's opponent, came to the place and saw the Jehovah's Witness. She too stepped over him and hurried on to the next house. "But then a young man from the other side of town, carrying a milk crate full of candy he was being forced to sell door to door "so I can go to youth camp this summer," came where the man was. He took pity on him, dropped his crate of candy (to the consternation of his handler, watching him carefully from a car down the street), picked the man up, and carried him to a nearby church, waiting there with him while the church receptionist speed-dialed the head of the deacons to decide how to handle this situation (which perhaps understandably wasn't covered in the church employee handbook). Eventually it was decided that the church receptionist should call 911, and soon thereafter an ambulance and a police car came. "The Jehovah's Witness was rushed to a local emergency room, where nurses bandaged his wounds. The police took the young man into custody. For his one phone call from the police department, the young man called the emergency room and told the triage nurse, 'Look after that Jehovah's Witness, and when I return, I will reimburse you for any extra expense you may have - no matter how many candy bar sales it takes.' "Which of these people do you think was a neighbor to the man who was beaten for interrupting Wheel of Fortune?" The values voter replied, "The one who had mercy on him." Jesus told him, "Go and do likewise." (Luke 10:25-37, paraphrased)
Email Post