I've just made my first ever visit to Birmingham, Alabama, where fifty-one-and-a-half years ago Martin Luther King Jr. was jailed for his role in organizing nonviolent protests by black Alabamans against the unfair, inhumane and fundamentally unjust policies of their city. While King was in prison, men, women and children of color were attacked on the streets of Birmingham with dogs and fire hoses. Their attackers were police and fire fighters; the attacks were sanctioned by the commissioner of public safety. 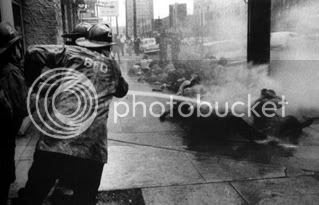 These things happen. I like to think they don’t. I like to think that they used to happen but we know better now; that we’re wiser and more enlightened than the people who decided fifty-one-and-a-half years ago that attacking children was the right thing to do. We like to think that, unlike those silly old Southern racists, we always handle power and authority responsibly, that our motives are more pure, that we are always acting for the greater good. But history bears out that at least some of the time - certainly more of the time than we'd like to be true about ourselves - we’re not. Sometimes we participate in (or we affirm or we tacitly endorse by our silence) things that are horrific and fundamentally unjust.

TWEET THIS: Sometimes we participate in (or affirm or tacitly endorse by our silence) things that are fundamentally unjust. Black lives matter just as much now as they did fifty-one-and-a-half years ago when white moderate clergy were complaining that Martin Luther King was stirring up trouble. Those well-intended white folks back then encouraged black people that their inherent dignity as human beings was a matter to be deferred till white people were more ready for it. They counseled black people to be patient and understanding toward white racists who were actively, in legal and insidious ways, cultivating a permanent race-based underclass. Black lives mattered back then; those of us who are white just didn’t fully appreciate that fact. It seems so silly now. Black lives matter just as much now as they did twenty-five years ago when South African whites finally agreed to stop secretly executing black dissidents and officially oppressing the 90 percent of the country who were not white. Black lives mattered back then, even if in every meaningful way, their government demonstrated that they did not. It seems so silly that they didn’t see the fundamental injustice of what they were doing and allowing to be done. Black lives matter: it seems so silly to say in the abstract. But we say it now as much to ourselves as to everyone else because we as much as anyone, black and white and otherwise, need to be reminded on a regular basis that it’s true. Because in the absence of such reminders, a much quieter system continues to function as though black lives don’t matter that much at all. And the consequences of that system are not silly; they are in fact sobering and solemn: daily injustices and indignities regularly punctuated with the violent deaths of young men — children, more often than not — at the hands of people of power and privilege. Future generations will read the stories of our time and think us silly; with time the absurdity of it will obscure the bloodiness of it, the inhumanity of it.

TWEET THIS: Future generations will read of our time and think us silly. The absurdity of it will obscure the inhumanity of it. *** Read Martin Luther King Jr.'s letter from Birmingham Jail here. Read it out loud; read it in a group.
Email Post