My Paragraph from Birmingham Jail

Earlier this month I had the opportunity to participate in a reading of Martin Luther King's letter from Birmingham Jail. We recorded it; it'll eventually be made available at Red Letter Christians. This was the letter King wrote, on scraps of paper snuck in and out of prison by his lawyer and other visitors, in response to white moderate clergy who had criticized the nonviolent direct action King and others had conducted against the city's segregationist policies. In addition to putting people in prison, Birmingham police and fire fighters attacked protesters, including children, with dogs and fire hoses. 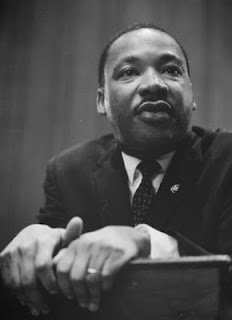 The letter is one of the most significant moral documents of the twentieth century and is especially poignant in the wake of recent acts of violence by police against black men and children in various precincts throughout the country, and the failures of the justice system to properly prosecute the deaths of black men like Michael Brown in Ferguson, Missouri, and Eric Garner in Staten Island, New York. We read this document in the context of a larger conversation about race, institutional bias and violence, and the role of white allies in the cause of racial justice. There are, of course, other racially tinged conversations taking place in the United States these days, principally related to immigration reform. Our group was relatively ethnically diverse, made up mainly of activists and community organizers of various stripes, with a progressive bent. It was still hard to talk about race, and especially to talk about the role of white people in the pursuit of what King called the beloved community. We didn't resolve anything in particular, and I suspect more conversations were started than wrapped up. But we sat together, and in ways small and large we stood together. I mostly operated the video camera for the reading of the letter, which was profound for me in and of itself. Tony Campolo, a decades-long champion of justice and racial healing, spoke with his typical passion. Urban hippie Shane Claiborne was powerful in his soft voice; new monastic Jonathan Wilson-Hartgrove read slowly and deliberately, letting every word count. Seminarian Micky ScottBey Jones and organizer-scholar Alexie Torres-Fleming read with the passion of a mother and a prophet; pastor and blogger Anthony Smith delivered the opening and closing paragraphs of the letter with the same delicate balance of vision and cynicism that I see reflected in King's text. And there were many, many others, people of all stripes, giving voice to King's words, reminding us that though we've come a long, long way, we have terribly far still to go. 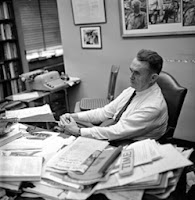 In addition to recording the letter, I also got to read a portion of it. I actually requested the paragraph I read; it references my wife's great-uncle, Ralph McGill, at the time the editor of the Atlanta Constitution, who I'm proud-slash-relieved to say was on the right side of history. I think of Ralph often, as our work overlaps: he, the editor of a historic newspaper in a major city; I, an editor of books. That's about where the similarities end, but I like to think about how hard it must have been for him to have a public voice, to curate messages and stories for a divided public, at a seminal and painful moment in American history: I have no idea how Ralph carried this burden - he died well before I met his great-niece - but I think of him when I think about the weight of history I sometimes find landing in my in box. Here's what I read from King's letter:

I had hoped that the white moderate would see this need [the need for intervention in the oppression of blacks in the segregated American South]. Perhaps I was too optimistic; perhaps I expected too much. I suppose I should have realized that few members of the oppressor race can understand the deep groans and passionate yearnings of the oppressed race, and still fewer have the vision to see that injustice must be rooted out by strong, persistent and determined action. I am thankful, however, that some of our white brothers in the South have grasped the meaning of this social revolution and committed themselves to it. They are still all too few in quantity, but they are big in quality. Some - such as Ralph McGill, Lillian Smith, Harry Golden, James McBride Dabbs, Ann Braden and Sarah Patton Boyle - have written about our struggle in eloquent and prophetic terms. Others have marched with us down nameless streets of the South. They have languished in filthy, roach infested jails, suffering the abuse and brutality of policemen who view them as "dirty nigger-lovers." Unlike so many of their moderate brothers and sisters, they have recognized the urgency of the moment and sensed the need for powerful "action" antidotes to combat the disease of segregation.

I wanted to read this paragraph for the video because I thought it would honor Ralph's memory. It was, nevertheless, a hard paragraph to read. There are words in it that I am loathe to say. More than even that, however, was the challenge underlying these words. Ralph McGill, Lillian Smith, Harry Golden, James McBride Dabbs, Ann Braden, Sarah Patton Boyle and the other unnamed white allies in King's letter are not characterized as "radicals" or even "progressives." They're certainly honored as "brothers" (and, presumably, "sisters"), but brothers and sisters "of the oppressor race." Moreover, their acts of moral courage - to write to a white audience in favor of integration and the civil rights of black people, to march with blacks in hostile towns, to endure imprisonment, to experience official violence in solidarity with their black neighbors - these acts of moral courage are merely, in King's vision, "moderate." It is not in the least bit radical, King demonstrates methodically throughout the letter, to acknowledge the basic human rights of another human being. It's hardly progressive to recognize the difference between a just law and an unjust law, to obey the one and defy the other. We are not saints when we stand with people who are persecuted and oppressed. We are doing the basic thing, the only right thing.

TWEET THIS: It is not in the least bit radical to acknowledge the basic human rights of another human being. When we fail to do these things, we fall short of even moderation; when we fail to stand for and with those whose rights are being violated, who are suffering violence in service to an unjust system, we have fallen into sin.

TWEET THIS: We are not saints when we stand with people who are oppressed. We are doing the basic thing, the only right thing. The burning question, I think, for most white people, especially white people of good will, when it comes to race relations, is "How much is enough?" That elusive "enough" will ease our white conscience, but it will not serve the cause of justice; it will not settle the matter of racial inequality. King addressed the elusive enough in another historic paragraph, delivered only a few months after Birmingham:

That day is slow in coming. But it is coming. And we who are white would be wise to be at least moderate enough to stand on the right side of history with our neighbors of color who have waited long enough.
Email Post

Eddie Eddings said…
Half way through your Me-ville book. Enjoying every page!
4:08 AM

Eliseo Weinstein said…
Thank for letting me speak my peace. Everyone needs to do their own research before picking a bail bondsmen. Go online and join a local Facebook group and ask about reviews concerning a bail bondsmen. You will get a great cross section of impartial third party comments that will help you to make a more informed decision.