I am the target audience of the recently released record The Art of McCartney. I see the word McCartney, I click "Add to cart." In this case, however, I clicked "Add to Christmas list" (thanks, Ginny!) which explains this late review of the album. Sorry. Paul McCartney is, undoubtedly, one of the most prolific musicians/songwriters of the past fifty years. Indeed, he's been actively contributing to the canon for more than half a century now, and he shows no signs of slowing down, as evidenced by his even more recent collaboration with Kanye West. Based on output, consistent quality and global influence, McCartney is certainly a good candidate for a tribute album by "the world's greatest artists." If only there were such an album. I was eager to get into The Art of McCartney, and I should probably admit at the outset that I've listened to little else beside it since I opened my Christmas presents. That said, the album is, on balance, disappointing. And it could hardly not be. The album is an odd marriage of incredible hubris and, in many cases, creative laziness. 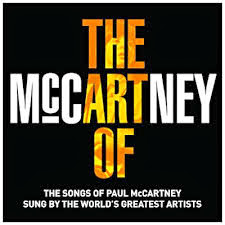 We begin with the hubris, amply demonstrated in the album's subtitle: "The Songs of Paul McCartney Sung by the World's Greatest Artists." I will quibble over the relative greatness of various contributors later, but for now let's just consider what is being said by this statement. I quibble. Forgive me. Despite the deep offense I've taken from the album's subtitle, I do enjoy listening to it - mainly, however, because it's a convenient collection of good songs by an artist I like. Most of the contributors stick pretty close to the original arrangements, which makes the songs easy to digest even if it doesn't mine the songs for their deepest meaning or inherent artistry. As much as I love Chrissie Hynde, her version of "Let It Be" casts no new light on the song. I can play it, or I can skip it, and I am neither better nor worse for it. The most egregious example is Hagar's "Birthday," which sounds like something he recorded at a karaoke kiosk at the mall. I seriously doubt he was in the same country as the house band behind him. (Note to Sammy Hagar: Repeatedly exhorting your listeners to "Come on!" does not a world's greatest artist make.) There are, I think, three classes of contributors to The Art of McCartney: his appreciative contemporaries (e.g., Smokey Robinson, Willie Nelson, Bob Dylan); those who appreciate him as a historical artifact (e.g., Owl City, The Airborne Toxic Event, Corinne Bailey Rae); and those who were directly influenced by or indebted to him (e.g., Paul Rodgers, Heart, Steve Miller). The older and the younger the contributors are, it seems to me, the less slavish their renditions of McCartney's songs. I actually love the strain in Smokey's voice as he sings "So Bad" and in that of Yusuf (Cat Stevens) as he takes on "The Long and Winding Road." Toots Hibbert (with Sly and Robbie, presumably of the Maytalls) does a great reggae version of "Come and Get It"; he doesn't seem too enthralled by McCartney to make a song his own, which I appreciate. And "Wanderlust" by Brian Wilson? Fantastic. Similarly, the younger musicians on the album seem to retain their artistic objectivity and are able to both find the right McCartney song to perform and find the artistic core of it. Harry Connick Jr., who I acknowledge is not especially young but who beat the drum consistently on American Idol about song choice, reveals the excellent crooner qualities of "My Love," a nice contrast to Paul's higher-pitched, arena-sized rendition. Corinne Bailey Rae brings "Bluebird" out of the post-hippie basement and introduces us to the song's (and Paul's) jazz core. The Airborne Toxic Event strips down the cinematic "No More Lonely Nights" (a victim of 80s overproduction when Paul first put it out) and helps us tap into how it feels when you "can't wait another day until I call you." And Robert Smith makes "C Moon" sound exactly like a Cure song should. That leaves the third category: the artists who in large ways or small owe their careers to Paul. These contributions work when the artists lean into the legacy. I was surprised to find that I most enjoy the rockers: Def Leppard, Cheap Trick, and of all things, Kiss?!? Paul, I think it's fair to say, was the founder and godfather of arena rock, which is the sweet spot of these folks. They aren't intimidated by big songs like "Helen Wheels," "Jet" and "Rock Show"; they dive into them and enjoy themselves in the performance. Steve Miller has a good time with "Junior's Farm" and, in contrast to Chrissie Hynde's overly self-conscious version of "Let It Be," makes the iconic "Hey Jude" sound like something he might have written himself. That being said, the contributions that don't work, still work, because they're great songs by a great artist. The slavish arrangements of "Live and Let Die" and "Band on the Run" and "Eleanor Rigby" don't demonstrate the greatness of the artists performing them, but they do demonstrate the art of McCartney, who knows how to write and arrange and perform a song like nobody. It's nice to have this mix of singles and deep tracks all in one place, and even when I skip a song here and there now and then, I'm enjoying the overall experience on each listen. And while I am pretty offended by the hubris of the album's producers, for the reasons noted above, I do give them props: Paul has so many iconic ender songs, from "Hey Jude" and "Let It Be" to "Live and Let Die" and Hello Goodbye"; and yet they chose as their final track of thirty-six songs something soft and gentle, loving and lovely.
"Put it there If it weighs a ton" - That's what a father says to his younger son. "I don't care if it weighs a ton. As long as you and I are here, put it there."
Email Post