This past year I've reflected a lot on the Civil Rights Movement, in part because the-fifty-year anniversaries of seminal moments in the movement keep popping up on the calendar, but mostly because the news is filled with regular reminders that the fight for basic human rights is far from over. I find myself turning regularly to the writings of Martin Luther King, the movement's most public and prolific champion of nonviolent direct social action as a force for cultural change. White memory of the Civil Rights Movement tends, I think, to focus on its emphasis on nonviolence. It's noble, poetic and, of course, absent of conflict. What's not to like? But this memory is selective at best, sentimental at worst. The notion of nonviolence divorced from direct action removes virtually all value from it; nonviolence becomes docility, meekness, impotence. Introduce direct action and white memory quickly becomes uncomfortable, because the nonviolence of demonstrators for civil rights was contrasted with the despicable violence of its opponents.

TWEET THIS: The notion of nonviolence divorced from direct action removes virtually all value from it. The graphic novel March (volume two of three comes out in early 2015) does a great job of describing, in prose and pictures, the violent reactions to nonviolent direct action; more compellingly even, it portrays the discipline and spiritual preparation that came before every action. 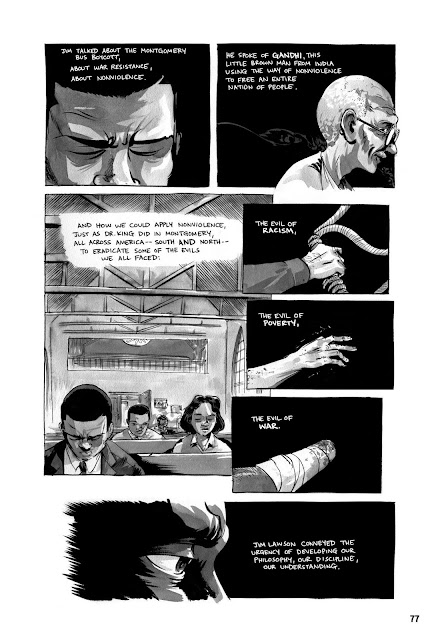 Jim Lawson trained college students in Nashville (including future U.S. congressman John Lewis, the narrator of March) to engage in sit-ins at segregated lunch counters. They prepared themselves to be spit on, cursed at, scalded with hot coffee, burned with cigarette butts, and otherwise physically attacked - all while maintaining their composure and commitment, all for the simple reward of sitting down to eat in a public place. Similar preparation was involved in marches in Birmingham and Selma, Alabama, where nonviolent demonstrators were attacked with dogs and firehoses by public officials. Nonviolence confronted violence - both the physical violence of reactionary racists and the insidious violence of institutionalized racism. Nonviolence won. "In any nonviolent campaign," Dr. King wrote in his letter to critical white clergy from Birmingham Jail in the midst of a direct action in that city, "there are four basic steps: collection of the facts to determine whether injustices exist; negotiation; self purification; and direct action." Those four steps undergird every nonviolent direct action of the Civil Rights Movement; they preceded the bus boycotts in Montgomery, Alabama, the march on Selma, Alabama, the citywide protests in Birmingham, Alabama, and the lunch-counter sit-ins throughout the South. In the warm glow of history we often lose sight of how much work goes in to social change. We picture George Washington and Thomas Jefferson happily pouring tea into a harbor; we picture Mohandas Gandhi waving goodbye to British troops as they finally let his people go; we picture Nelson Mandela smiling and shaking hands with the warden as he walks out of prison on Robben Island. We forget that even nonviolent campaigns for justice don't succeed without a fight.

TWEET THIS: Even nonviolent campaigns for justice don't succeed without a fight. You prepare yourself for a fight. What follows, quoted from King's book Why We Can't Wait, is how the soldiers in the battle for civil rights in America prepared themselves for their fight. It strikes me that these are not casual commitments; you don't just do them until they've gotten you what you want. These are lifestyle commitments, life-changing commitments. They lend themselves to far more than nonviolent direct action, actually: commit yourself to these things and you'll probably get into some trouble; but commit yourself to these things and you'll probably change the world.
I HEREBY PLEDGE MYSELF—MY PERSON AND BODY—TO THE NONVIOLENT MOVEMENT. THEREFORE I WILL KEEP THE FOLLOWING TEN COMMANDMENTS:
I sign this pledge, having seriously considered what I do and with the determination and will to persevere.