Two Ladders, No Heaven: Stan Lee, Yoko Ono, and the Universes They Imagined

When Stan Lee was a student, he was clowning around with friends in the classroom office of the school paper when he spotted a ladder. "“So I climbed up and wrote Stan Lee Is God on the ceiling, which was one of the earliest evidences of my overpowering inferiority complex.” He was joking, of course: Stan Lee was a lot of things, but he was not dealing with an inferiority complex. Joining the comic book industry in its infancy, Stan Lee, who died this week at the age of 95, worked like a horse for decades, seeing the fortunes of his chosen media rise and fall in the process. By the time he found himself working for Marvel Comics, the superhero genre was running on fumes, a caricature of its former greatness. It was all monsters all the time for Marvel. And then Stan and Jack Kirby came up with the Fantastic Four, a highly dysfunctional family of superheroes made powerful by exposure to radiation. There was even a monster among them--the Thing, a man whose body had been mutated into orange rock. And Stan saw what he had made, and it was very good. And so a universe was born, and in a sense Stan's scribbling at the top of the ladder was proven prophetic. 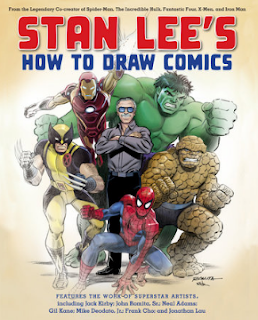 I've always been a Marvel guy. I was buying countless back issues of The Avengers before Chris Hemsworth was born. My first book was an ode to comic books, which tells you something about my nerd cred. I've idolized Stan Lee for most of my life. But as I step back from Stan Lee I see not so much the man as the mindset: What happens at the top of a ladder is generally telling. Stan Lee and all his contemporaries at the dawn of the superhero age were preoccupied with power, and rightly so. Many of the founders of the industry were Jewish, and they were creating characters and crafting tales while hearing stories of the criminalization of Judaism in Germany during the build-up to World War II. Closer to home, they were feeling the ongoing effects of the Great Depression. Is it any wonder that the fantasies of the day were caught up in deliverance: powerful men and women saving the helpless from every trouble and dispensing justice to those who would harm others. Captain America was introduced to the world in a drawing: He was punching Adolf Hitler in the face. How do we get the power to be heroes? In many cases, we manufacture it. Captain America was cooked up in a laboratory; the original Human Torch was a robot; Batman had deep pockets. Stan Lee came into his own in an industry that glorified power and sought to harness it. For his generation, the first impressions of the nuclear bomb were good: It had the power to bring whole wars to an end. And even a couple of decades later, after "fallout" became a thing and nuclear power lost some of its luster, there was still the hope that good things come from those who harness it: The Fantastic Four were fantastic, after all, and while the Hulk was terrifying, he was also cool. Radioactive material made Matt Murdock blind, but it also made him Daredevil; a radioactive spider turned Peter Parker into Spider-Man. "With great power comes great responsibility," Peter learned the hard way from his uncle Ben. But before you get the responsibility, first you get the power. 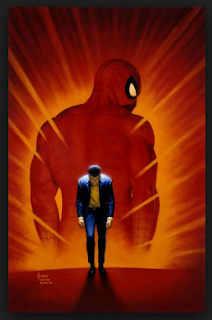 YOKO ONO was born ten years and some change after Stan Lee in Tokyo, Japan. She was twelve and a half when Hiroshima and then Nagasaki were obliterated by nuclear bombs. Somewhere between 130,000 and 226,000 Japanese people died as a result of those two bombings. Imagine coming of age in full view of the most devastating military action of all time. Imagine that the power harnessed through the technologies of warfare--atom splitting and bomb making--were symbols not of deliverance and victory but the utter devastation of your homeland. I had a professor who wanted to reset our calendars so that August 6, 1945, when the US government killed Hiroshima, Japan, would henceforth be counted as the beginning of time, the start of the nuclear age. Every future decision of ethical import would have to take into consideration the fact that we had it within our power to destroy the planet. Yoko Ono has her own ladder story. In 1966 she was exhibiting her art in London when John Lennon walked in. Lennon, the goofball anarchist of The Beatles, explored the exhibit, which included a white ladder that reached all the way to the ceiling. At the top was a magnifying glass, and on the ceiling were three little letters, so small you might miss them. "You feel like a fool," John told an interviewer years later, "you could fall any minute - and you look through it and it just says 'YES.'" Yoko was doing her own thing, markedly different from the art of her day: "all anti-, anti-, anti-," as John recalled. The two quickly became a bonded pair, and together they began to imagine the world as a place of possibility, with power being not something you harness so much as something that simply exists within you and without you, something you simply embrace. "War is over!" they shouted from the rooftops of Times Square in New York City. "(If you want it)" was the whisper to the shout. "Imagine there's no heaven," John wrote, and we imagine Yoko sitting next to him at the piano as he wrote. "Above us only sky." I follow Yoko on Twitter and to this day she's still imagining such lofty, implausible things: Imagine that you are mystically joined to every other thing in the universe, such that your inner peace can manufacture world peace. Ten years and a world apart from Stan Lee, Yoko sees the universe differently, and she gives a little time each day to shaping it from her little corner of it. The two of them, Stan Lee and Yoko Ono, strike me as competing visions for how the universe works: Do we seize power, shape it and set it loose on the world? Or do we breathe power in and out, and so hold it loosely as we share it with the world? Yoko and Stan answered that question; the rest of us have to as well. *** There's a third ladder story, this one in the Bible. Jacob the deceiver is on the run from a brother who wants to kill him. He carries with him the blessing of his father, who himself carried with him the promise of God that he and his children would be a blessing to the nations. Jacob has a vision on the road of a ladder to heaven, with angels ascending and descending. This, then, is the biblical view of the universe: Power is something invested in the world by a God who created it and loves it. We come by power as an accident of being. We may harness it, we may hold it, we may share it, we may hoard it. But it doesn't originate with us; it doesn't come into being by sheer force of our will or imagination. "Whatcha gonna do," Kanye West wrote, "with all that power?" It's an ethical question, and God already gave us the answer: Use it to bless.
Email Post