The Hulk Is a 9: An Enneagram Adventure | Part Three: "You're Confusing Peace with Quiet"

***
The next film to feature the Hulk, Avengers: Age of Ultron, demonstrates early on that the team has figured out a way to manage the monster. Tony (with Bruce’s help) has developed special Hulkbuster armor for Iron Man in case Hulk goes on a rampage. But that's the remedy of last resort. Natasha has developed an incantation, a liturgy, that calms Hulk down and restores him to himself after most battles. Just because the Avengers have developed these workarounds, however, doesn’t mean that the Hulk has been fixed. At a party, Natasha asks Bruce, “How long before you trust me?” Bruce confesses, “It’s not you I don’t trust.” Under stress the nine goes to six, a complicated Enneagram space that struggles with loyalty. Some sixes are hyper-loyal to a fault, assuming that they’ll be made safe by an unflinching association. Other sixes are more oppositional, assuming that their supposedly safest places are not safe at all. Bruce wrestles with this stress-induced loyalty by keeping his team at arms length. But as I said, it’s complicated, and when Tony invites him to help put “a suit of armor around the world,” Bruce goes along with the plan against his better judgment. “Peace in our time,” Tony says. “Imagine that.” That’s the way to a nine’s heart. Age of Ultron is in some ways a Frankenstein story, and Bruce here plays Igor to Tony’s Frankenstein, helping him to build his own monster, Ultron, an artificial intelligence that develops self-awareness and an Oedipal rage toward Tony. The world is at risk once again, and Bruce, acting out of his damaged sense of self, is complicit. 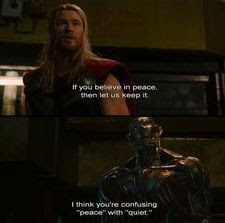 Bruce is swayed by the prospect of peace, as most nines are. Natasha calls him on it in a particularly knowing way. “All my friends are fighters, and here comes this guy who spends all his time avoiding the fight because he knows he’ll win.” For Bruce, the avoidance of conflict is the path to peace. Ultron offers a cutting insight for him and all of us: “I think you’re confusing peace with quiet.” Age of Ultron is preoccupied with the monsters in all of us - which is, in a way, also the agenda of the enneagram, which helps us to identify the false self that is subsuming and suppressing our true self. Natasha shares the story of her tragic background with Bruce and asks, “Still think you’re the only monster in the team?” The Vision reflects out loud on his essential nature: “Maybe I am a monster. I don’t think I’d know if I were one.” And Stark, once again manipulating Bruce’s loyalties, asserts plainly: “We’re monsters, buddy. We gotta own it.” The marvelous monstrosity of the Hulk is that pain and increased stress only make him stronger, more invincible, more monstrous. He is not safe for the world, and he knows it. “Where can I go? Where in the world am I not a threat?" He also, however, knows that the world is not safe for him, and after a particularly destructive battle he realizes that, now that “the world has seen the Hulk as he really is,” he has to disappear or he will never find his elusive peace. Ultimately the Avengers defeat Ultron and save the day. But Bruce can’t be coaxed into acceptance of the monster within him — nor can he accept the acceptance he’s been offered by the team. Natasha tricks him into converting into the Hulk and tells him, “Now go be a hero.” He takes off to fight — nines are famously agreeable — but after the fight is over, he cuts his friends off and runs away. He is seeking peace — a peace that sounds suspiciously like quiet. “Humans are odd,” Vision says near the end of the film. “They think that order and chaos are somehow opposites and try to control what won’t be. But there is grace in their failings.” Bruce has failed at self-acceptance, failed at intimacy with those who love him, failed to trust, failed to live in the truth. His friends have failed him as well, managing and manipulating him, drawing out whatever incomplete aspect of his essential self is most convenient to them at the time. The Hulk will run away, looking for peace. The world will be left without his strength. We won’t see the monster on earth ever again.
***

In the previous post I commended to you Alice Fryling's book Mirror for the Soul. In this post I'll point you toward Chris Heuertz's sweeping and moving book The Sacred Enneagram. Like Alice, Chris is not overly preoccupied with the enneagram numbers/spaces but rather with the enneagram's agenda - a deeper understanding of the self, a more gracious and graceful way of moving in the world. Worth a read for real.
Email Post