The End of Precision 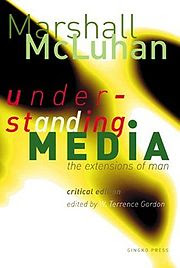 It started out innocently enough. I wanted to quote from Understanding Media by Marshall McLuhan, but I couldn't think of a way of conveniently including bibliographic data. So I settled on linking the name of his book to its Amazon.com page, with the presumption that interested readers could "search inside" to find the particular page number of the quotation. Here's the tricky thing: Amazon, so far as I can tell, doesn't list the edition that I got from my library to read, so I just picked one of the editions available there and linked to it instead.

Then I wanted to "tweet" quotes from the book on Twitter. There I'm limited to 140 characters per entry. "Marshall McLuhan, Understanding Media" is itself 37 characters, which means I could quote roughly twelve words at a time while giving a sort of baseline bibliographic reference. So I settled for shorthand, depending on how long the quoted material was: anywhere from "Marshall McLuhan, UM" to "MM." I counted on the sheer volume of quotations, archived together sequentially in my Twitter feed, to acclimate readers to my source material.

But then occasionally I couldn't even recover two measly characters to anchor a particularly long quote with "MM." Heck, I couldn't even complete the quote. I was in negative Twittertory. So I had to get cre8ive: I took out spaces between punctuation, between lowercase and uppercase letters. I digested two pages of material with ellipses. And then I did it: "at" became "@"; "to" and "too" became "2"; "for" became "4"; & so on & so 4th.

But w8--there's more. I was reading in the car during a road trip and wanted to take notes, but I hadn't brought a pen or paper, and remember, this was a library book. No prob--I pulled out my iPhone and used the "Notes" app to jot down quotes using the touchscreen QWERTY keypad. Oops! I misspelled something! No problem--the iPhone autocorrects miskeys, even going so far as to guess the word you're spelling so you don't have to waste so much time hunting and pecking. But all of a sudden--Oops! Marshall McLuhan misspelled something! It turns out the third printing of the 1964 McGraw Hill hardback edition of Understanding Media has a scandalously large number of typos. It also turns out that it's painfully difficult to intentionally misspell something on the iPhone. My notes, it turns out, inadvertently serve to cover over the infelicities of the original edition. Portrait artists, I'm told, used to do that when painting royalty, conveniently neglecting to paint warts and scars and mustaches onto the gentlemen and ladies of the court. But that was so they would get paid, or even so they wouldn't get their own heads cut off. Now we do it inadvertently, accidentally. Here's a sample text from Understanding Media in two forms--first in its original form (page 353 of the 1964 McGraw Hill edition) and then as it might appear posted from an iPhone to Twitter--in two posts, because it's too many characters for one:

Let us not forget that nationalism was a mighty invention and revolution that, in the Renaissance, wiped out many of the local regions and loyalties. It was a revolution achieved almost entirely by the speed-up of information by means of uniform movable types. Nationalism cut across most of the traditional power and cultural groupings that had slowly grown up in various regions. Mutli-nationalisms had long deprived Europe of its economic unity. The Common Market came to it only with the Second War. War is accelerated social change, as an explosion is an accelerated chemical reaction and movement of matter. (Marshall McLuhan, Understanding Media [New York: McGraw Hill, 1964], p. 353)

Note that mutli-nationalisms is corrected in its spelling and omits the hyphen. Elsewhere character spacing has been sacrificed, and an ampersand replaces the word and. The digital age has ushered in the end of precision, I tell you. What's an editor to do?!?

When I was a kid, during the years when preadolescents worried about global thermonuclear war, a girl I liked loaned me a manuscript of a postapocalyptic novel. In it the main character, a little girl who had survived an atomic explosion, was learning to subsist by herself in a hostile environment. She journaled her way through it and decided, for the sake of efficiency, that she didn't need to use articles and other grammatical devices in her writing. "The dogs are coming for me" became "Dogs coming 4 me"; that sort of thing. It doesn't take an apocalypse, however, for this utility to become commonplace. Precision in prose--even the full development of a thought--has given way to the utility of text. "Dogs coming 4 me" is just the sort of thing a frightened child might text to her mom as she ran away from the neighbor's pit bull. Our communication patterns are catching up to the immediacy of our media, and along the way a little precision simply has to go by the wayside.

That's not all bad--not by a long shot. The more exciting aspect of this is that such a message presumes a response. No word is the final word. Mom might text back "Throw ur bk bg at it" or "Shout for hlp frm some1." Should I post an incomplete thought from McLuhan or someone like him, someone might very well tweet back "What page is that quote on?" There's a feedback loop in the digital age that makes precision less pressing, complete thoughts less requisite. I would imagine McLuhan himself would have a thought or 2 @ the subject, but the bottom line, I think, is this: Reading does not have to be, nor necessarily should it be, as secluded an exercise as we have come to think it is. Precision is a value, to be sure, but a lack of precision doesn't shut down a discussion, which is where all communication, I think, is headed.
at July 28, 2009

Ok. I'm assuming that, "I was reading in the car.." doesn't mean you were also driving while texting.
Or were you the guy in front of me steering with his kness, texting, and shouting, "Eureka!"?

Yeah, I thought that might generate some alarm. I was in the back seat, I promise. I may have shouted "Eureka!" once or twice.

My word verification: "peche" which I believe is French for "fish."