The Joys of Being Out of Your Depth

I was born in a small town . . . and I live in the suburbs. I have a curious intellect with only a modest education. I have precious little aptitude or comprehension of the insights and methods of the hard sciences. I spell good and smith words and otherwise enjoy a reasonably simple life. That's pretty much the sum of me.

This weekend, however, my wordsmithing profession got me sent to Osprey Point Retreat Center on Chesapeake Bay in Maryland, where I hobnobbed with world-class physicists, bioethicists, neurologists, chemists and policy specialists. My thanks to the Trinity Forum for making me feel so welcome there.

I knew pretty quickly that I was going to be out of my depths here. I'm accustomed to rustic retreat centers in midwestern milieus at which I'm the adult chaperone to carloads of adolescents. I'm accustomed to bulk quantities of pasta and mass-produced toast. Not so here: the "buffet lunch" awaiting us during our trip from the airport was, not the sneeze-guarded stuff of the Sizzler set, but a choice between two plates: a veggie sandwich plate or a salad with chicken breast. I took the salad and had to remind myself every now and then not to freak out at how good it was. Dinner was no different, nor were breakfast or lunch the next day. Even my napkin was made of cloth.

Here's a picture of my room, which was, I remind you, for one person. Also, please note, there's no TV. (My one complaint. :) 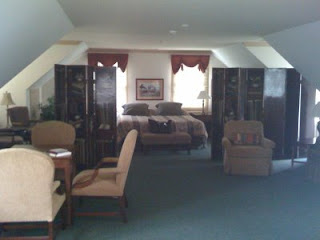 Even the undergrad interns were pleasantly intimidating at this event, but everyone was remarkably gracious and inviting, and the things we discussed--the intersections of scientific and religious inquiry, their points of conflict and strategies for how they might synergize in the quest for truth (or veritas, simply because using Latin makes me feel more competent)--made clear the notion that the chasm between scientists and theologians simply must be bridged for the benefit of the human community. In order to achieve that reconciliation, both sides need to make a fresh appraisal of their limits and recalibrate their inquiries toward a point beyond both: knowledge, as philosopher Dallas Willard contended, rooted in humility. (I sat at his table for dinner. I know that's name-dropping, but I'm still a little wigged out by it.)

The Trinity Forum is developing a curriculum to facilitate this conversation among college students and laypeople; that's why we all came together. This isn't the only subject matter they explore, and they're looking to establish pockets of discourse throughout the country. If you're interested, you should really check them out.
Email Post
Labels: Dallas Willard ethics Osprey Point religion science Trinity Forum