Break the Fast: An Imagined Lament

This week I'm taking a voluntary seven-day fast from whistling. I managed to offend somebody at the grocery story over the weekend, merely by whistling, and while I think he was being overly sensitive (and yet, simultaneously, highly insensitive--weird), I thought it'd be a good challenge for me to refrain from whistling for a while--to track down why I so often, and so unconsciously, resort to it.

Two days into the fast, whistling seems to be all I'm thinking about. I'm listening to Neil Finn's "Try Whistling This" (which includes, on the song "Last One Standing," the line "Break the fast," so I guess it's OK that I've caught myself about six times already starting to pucker and blow). I'm substituting clicking my tongue or drumming my teeth; I'm posting constant updates on my fast to various social media. I'm even imagining snappy retorts to the guy at the grocery store. All these things would seem to defeat the purpose of fasting, but actually I think it's a good mental exercise for me, something short of an epiphany but along the same lines. 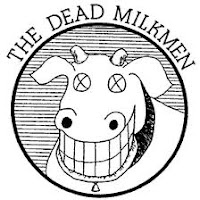 As part of today's obsession, I rewrote the lyrics to "Instant Club Hit (You'll Dance to Anything)" by the Dead Milkmen, reimagining it as a lament taken up by professional whistling artisans as they watch sputtering swine like me trampling over the pearls of their craftsmanship. Here, for your amusement (and mine, I freely admit), goes nothing with "You'll Whistle Anything," by Whistling Jack Smith, Fred Lowery, Professor Pond and their peers in professional and amateur whistling (as imagined by me):

Oh, David, what’s the word?
Don't you sound like Andrew Bird.
How long’d it take to train your embouchure?
What a terrible waste of atmosphere!
You purse your lips and pretend you’re creative;
The sad truth is you're derivative.

Get into the groove and get out of my space.
I came here to work, not to hear from your face.
So why don't you just take it on home
'Cause if you want to whistle you should do it alone.

You'll whistle to anything! [x2]

Don't try to tell me that you're improvising
'Cause you're just boring—not mesmerizing.
"I once whistled Rhapsody in Blue—aren’t you impressed?"
Blow it out your nostrils 'cause you sound like a mess.
Puckered up like Lauren Bacall making moves on Bogie.
Like you had too many peppers on your spicy hoagie.

You'll whistle anything by any bunch of industry stooges who pollinate your imagination with the offal from their face paint and jack up their merch prices till you crack your head on the debt ceiling when you should be giving your cash to decent masters of the nonverbal oral music arts, such as ourselves!