Platform for Postmoderns, Part One and a Half

Welcome to Loud Time. If you read part one of this series and you came back to see who I'm going to vilify today, I apologize for setting the bar so low in my first post. I came into this series not to bury baby boomers--especially those who have framed our expectations for how we make our messages known--but to begin an inquiry into how the rest of us can be ourselves in the emerging environment we find ourselves in, and yet still make contact with steadily increasing numbers of people with the message we think they need to hear. In other words, I came into this series to give all of us a place to talk about platform for postmoderns. If that sounds good to you, welcome to part one and a half, wherein I offer some caveats. Here's what I'm not saying. I'm not saying that I've cracked the code for building a fool-proof platform. If you're looking for a short cut to material success, keep looking. 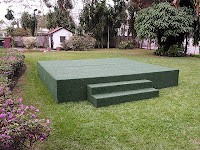 I'm not saying (specifically in my previous post) anything of any kind about Mike Hyatt's character. I'm sure he's a great guy, and there's much of value in his writing. My critique of the modernist cult of platform is not an attack on people but a critique of the game, the rules of which both Hyatt and I have had to play by on a daily basis by virtue of working in a platform-dependent industry, the rules of which all too often we accept uncritically. I'm also not saying that postmodernity is inherently more virtuous than modernity. Narcissism, materialism, isolation and dehumanization are not in and of themselves artifacts of an era; in my book Deliver Us from Me-Ville I argue in fact that cultural narcissism is central to the human story, and isolation and dehumanization are among its byproducts. Getting a message out effectively and with integrity continues to be a challenge in this postmodern age, and more particularly so by virtue of the lingering dominance of modernist assumptions about the world. I'm also not saying that baby boomers are bad people, or past their prime, or anything like that. Some of my favorite people are baby boomers. I was feeling snarky when I wrote that stuff. Sorry. I'm also not saying that what I'll be discussing in this series is purely postmodern in its entirety. I'm not a trained philosopher, so I'd be quickly out of my depth if I tried to explain the breadth of contemporary thought and the thinking that it's gradually supplanting. Neither am I an anthropologist, so I'd be wasting my time and yours to try to paint a precise portrait of the postmodern cultural shift. "Postmoderns" is, for the purposes of this series, a convenient catch-all, with a nice alliterative garnish. Insert additional caveats here. Here's what I want: I want to develop and implement a perspective on platform that honors what we've come to recognize as weaknesses in the structures and systems of modernity. I want to explore a strategy for message-building that is more communal, more participatory, more resistant to the problems I identified in my previous post. Mostly, I want to figure out how to amplify the voices and extend the reach of my friends who are themselves "postmodern," who have messages and visions that merit broad adoption and who would feel and look ridiculous dedicating inordinate time to head shots, web optimization and other platform vanities--who would, in fact, by doing so be distracted from their important work. Some of what I develop here will be a critique of how postmoderns are currently developing and advancing their messages. There may well be points along the way where they could stand to be more modernist, or where they're putting their energies in things that are ultimately self-indulgent rather than message-enhancing. I will, of course, share my own experiences both of wasting energy and of desperately promoting myself and losing myself in the process. When it comes to the platform game, in the words of Thomas Merton, "the human race . . . is no more and no less ridiculous than myself." Final caveat: I don't actually know what I'm talking about. My success in building a platform (as conventionally understood) is a mixed bag. I've had three books (two and a fifth, if you go by word count) published conventionally, and I've contributed to a few more. I've had a regular column at a longstanding web magazine for a few years now, and I frequently contribute pieces to a variety of print and online media. I regularly get invited to speak at a variety of events; I have a high friend count, a growing follower count and a decent Klout score. But my books sales have been nowhere near bestsellers, my speaking engagements are generally modest, and I'm often not paid for what I write or what I say. I have a full-time job; my writing and speaking are not by any stretch my primary means of self-support. That, I think, is my first plank in a postmodern platform. When I was raising funds (unsuccessfully, it turns out) to help build a network of youth ministries, I decided that if I really think something is important, if it's really worth doing, then it's worth doing for free. It's also worth getting paid to do, of course; but your passion has value that extends well beyond the marketplace. We live in a world that is paradoxically drowning in opportunity and incredibly limiting. Hundreds of thousands of people audition every year to be the one American Idol. Anyone can publish a book at any given moment, and that book immediately gets lost in the pile of half a million other new books. The entire thing is absurd, and we're all indulging in the absurdity. The empire has no clothes. The first rule of platform for postmoderns? There is no platform. OK, enough caveats. On with the series. Next up (I think): If you want to build a platform, first you must plant a tree. In the meantime . . . What are you hoping I cover in this series on platform for postmoderns? What caveats have I missed? Share some of your frustrating experiences in your attempt to build a platform for yourself. Go ahead--it's a safe place.
Email Post